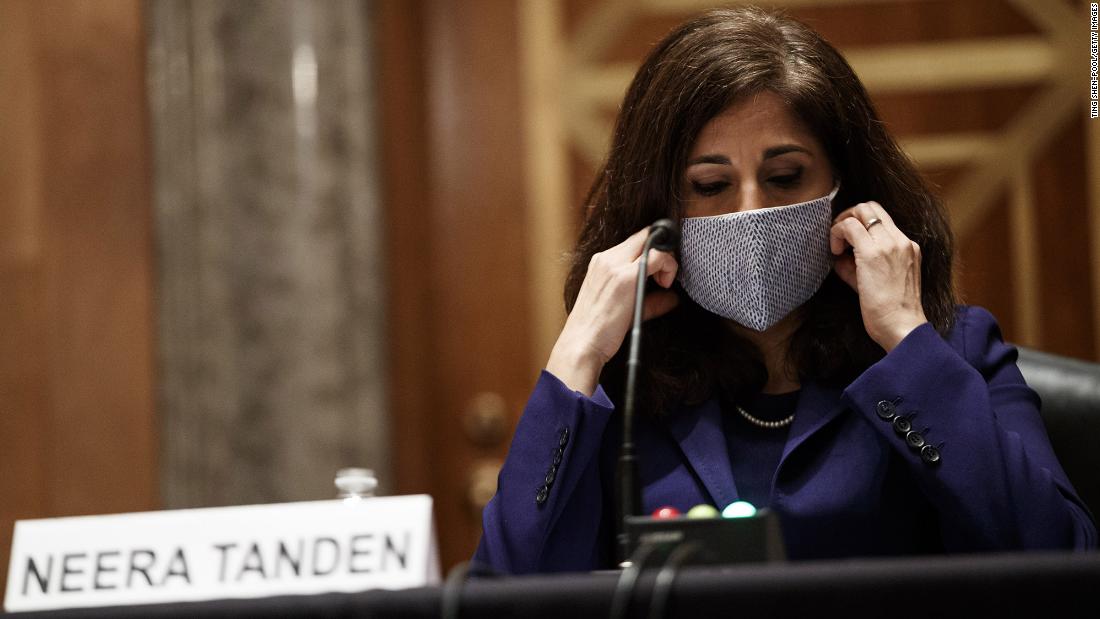 Biden said in a statement that Tanden had requested to withdraw her name from consideration, and that she would still serve in his administration.

“I have the utmost respect for her record of accomplishment, her experience and her counsel,” Biden said.

The former Clinton campaign aide and president of the left-leaning think tank Center for American Progress came under fire during the confirmation process for past critical comments of lawmakers on both sides of the aisle. The Washington Post first reported the White House’s decision.

The announcement comes after several key senators said they would oppose Tanden’s nomination, citing her past comments aimed at lawmakers and posts on social media.

Though Tanden withdrew her nomination, the White House saw no path to her confirmation, according to an administration official.

“We exhausted every path forward,” the official said.

In a letter to Biden, Tanden said it was the “honor of a lifetime” to be considered for the role.

“I appreciate how hard you and your team at the White House has worked to win my confirmation. Unfortunately, it now seems clear that there is no path forward to gain confirmation, and I do not want continued consideration of my nomination to be a distraction from your other priorities,” Tanden wrote.

Democratic Sen. Joe Manchin of West Virginia and Republican Sens. Susan Collins of Maine and Mitt Romney of Utah all said in recent weeks that they would oppose her confirmation, pointing to Tanden’s past criticisms of lawmakers on social media.

Without Manchin’s support, Tanden would have needed a Republican senator to vote in favor. Democrats hold a narrow majority in a 50-50 Senate with Vice President Kamala Harris able to cast tie-breaking votes in the chamber.

Republican Sen. Lisa Murkowski of Alaska had been seen as a potential swing vote and met with Tanden on Monday afternoon to discuss her nomination. Murkowski told CNN shortly before the nomination was pulled that she had still not made a decision on Tanden.

However, a senior administration official told CNN’s Jake Tapper that Murkowski had conveyed to the White House that she was a no, hence Tanden had withdrawn.

A senior administration official said the backing of independent Sen. Bernie Sanders of Vermont and Democratic Sen. Kyrsten Sinema of Arizona was also very much in doubt.

Sanders, the chairman of the committee that oversaw Tanden’s confirmation hearings, told CNN’s Wolf Blitzer on “The Situation Room” that he did not believe Tanden had the votes to be confirmed.

“Well, right now Neera Tanden does not have the votes, so we’ll see what happens in the future,” Sanders said in an interview moments before the White House announced her nomination was being pulled.

Tanden apologized and expressed regret over her past tweets during Senate confirmation hearings last month.

She appeared before the Senate Homeland Security Committee and apologized for some of the criticism she has previously directed at congressional Republicans and expressed regret over past tweets. Tanden later faced senators on the Budget Committee, including Sanders, an independent who caucuses with Democrats, who said some of her past comments amounted to “vicious attacks made against progressives.”

In the days after the election, Tanden also deleted more than 1,000 tweets from her personal account, some of which were reviewed by CNN’s KFile.

Tanden would have led a key economic post that oversees the production of the President’s proposed budget for his agenda if she had been confirmed.

The White House had remained steadily in support of Tanden for the role. Biden had said he did not intend to pull Tanden’s nomination and that he believed they would find the votes to get her confirmed. Senate Majority Leader Chuck Schumer said Sunday he was working with Biden to gather the support needed to confirm Tanden.

After Manchin and Collins came out against Tanden’s nomination, White House press secretary Jen Psaki released a statement in support of Tanden.

“Neera Tanden=accomplished policy expert, would be 1st Asian American woman to lead OMB, has lived experience having benefitted from a number of federal programs as a kid, looking ahead to the committee votes this week and continuing to work toward her confirmation,” Psaki said in a tweet.

This story has been updated with additional reporting and information about Tanden’s nomination.

Facebook
Twitter
Pinterest
WhatsApp
Previous articleJahmil French, ‘Degrassi: The Next Generation’ actor, dead at 28
Next articleMikaela Shiffrin doesn’t want to have to choose between ‘morality versus being able to do your job’ at the 2022 Winter Olympics