Protect Your Immune System Today!
Home U.S Unknown vandals shot a historical marker for Jackie Robinson and another for...
U.S 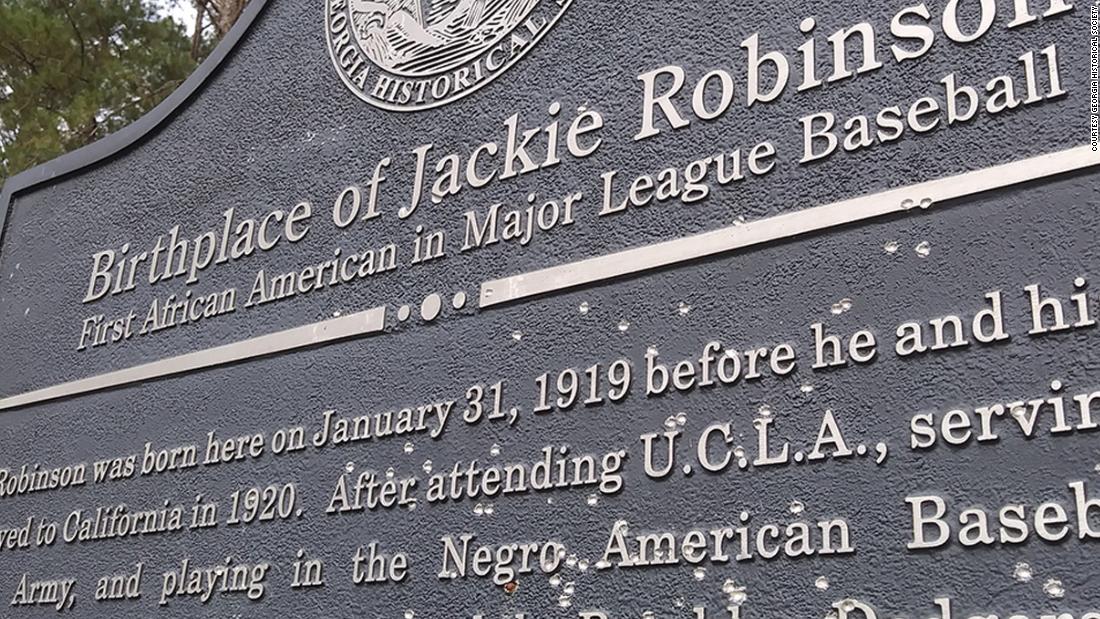 Two of those signs were found riddled with bullet holes, most recently a marker commemorating Jackie Robinson’s birth.
The vandals haven’t been identified, but their acts are just the latest in a disturbing rise in vandalism targeting historical markers, particularly those that center on Black Americans, said the Georgia Historical Society, a nonprofit that erects historical markers across the state.

The markers are a launch pad into the often racist history of Georgia and the US, Groce said. The recent acts of vandalism reflect how relevant that history still is, he said.

The Atlanta Journal-Constitution first reported on the signs’ damage.

Two signs have been shot at in the last year

The Georgia Historical Society received reports that the Robinson marker had been damaged last week and sent a member to Cairo, Georgia, Robinson’s birthplace, to investigate.

The member discovered the sign had been shot at from both sides, Groce said.

Lt. Daniel Lindsay with the Grady County Sheriff’s Office said the bullet holes looked as though they came from a shotgun. But because the sign is located in a remote area of the county and investigators don’t have a clear timeline of when the vandalism occurred, they haven’t yet identified any suspects, he told CNN.

Georgia Historical Society board member Erroll B. Davis Jr., former chancellor of the University System of Georgia, decried the damage done to the marker for Robinson, the Major League Baseball star whose achievement in breaking the sport’s color barrier “should bring pride to all Americans.”

“This is a shameful act of vandalism that unfortunately has been carried out against several other markers that commemorate Civil Rights figures, in Georgia and beyond,” Davis said in a statement.

Robinson’s marker was the second in the last year to be damaged by gunfire. In late 2020, unknown vandals also apparently shot at a marker near Valdosta that memorializes lynching victims including Mary Turner, a 21-year-old Black woman who was burned and shot to death by a mob while she was eight months pregnant. She was killed the day after her husband was lynched, two of 11 Black residents of their town to be lynched by a mob within days.

The marker for Turner’s lynching was covered in so many bullet holes it had to be taken down and recast, Groce said.

Both Turner and Robinson’s signs are in rural areas of Georgia, close to the exact spot of the events they commemorate. Though the locations are accurate, they’re often isolated, which “creates opportunities for mischief,” Groce said.

Groce declined to speculate on the motivations of the vandals, but he said it’s telling that they singled out the signs that commemorate Black history.

“There’s something about these stories that they do not like,” Groce said. “The fact that they used firearms is also trying to send a very strong message to us and to anyone about the story itself.”

The Georgia acts of vandalism are reminiscent of the repeated vandalization of a historical marker for Emmett Till, the Black teen who was killed in 1955 by two White men who accused him of flirting with a White woman. The sign in rural Mississippi was shot at and replaced multiple times since it was erected in 2007, most recently in 2019, when it was placed behind bulletproof glass.

The Georgia Historical Society’s limited budget wouldn’t allow for such methods of protection for its historical markers, Groce said.

Instead, they’ll likely relocate the signs. Groce said once the historians’ group recasts the sign for Turner and other lynching victims, they’ll place it along a well-traveled road. That way, he said, more people can view it and there’s less of a chance it’ll be vandalized.

“All Americans of all races need to embrace these stories,” Groce said of the tales told on the historical markers. “It illustrates who we are. Sometimes it tells some pretty ugly things about us.”

The goal of the markers, he said, is to start difficult conversations and shed light on people and events that were previously erased. Even if they can’t pay to protect them, the historians are intent on keeping them public.

US travel experts think that the summer of 2021 could be close to travel levels before the pandemic. CNN's Pete Muntean reports. ...
Read more
Load more