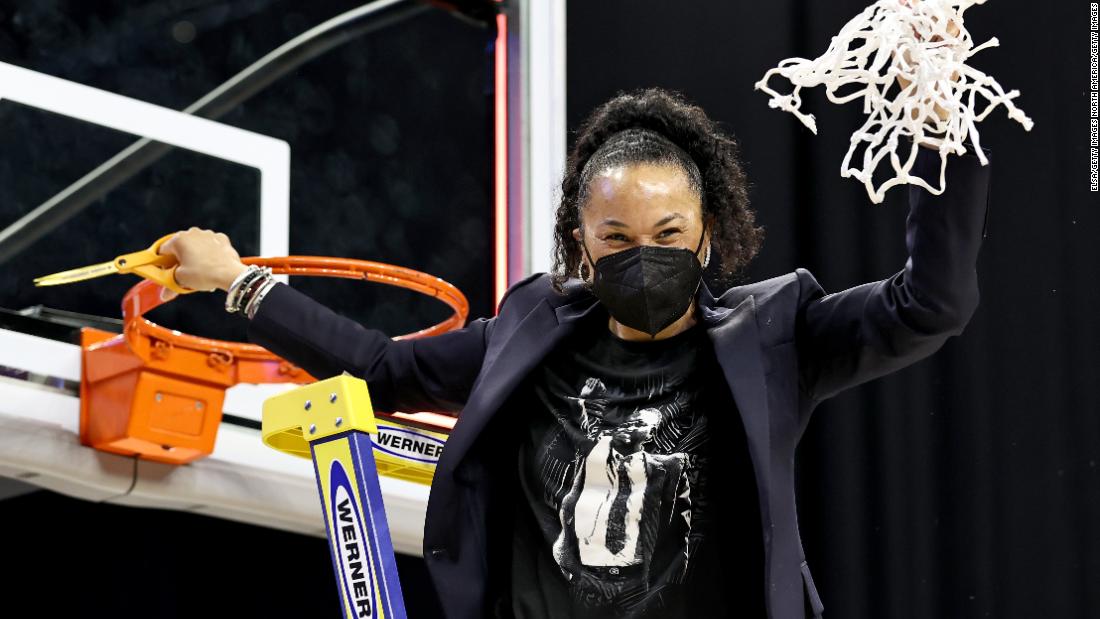 For the first time in NCAA women’s tournament history, two Black women will be head coaches in the same Final Four.

South Carolina’s Dawn Staley will be appearing in her third Final Four, winning the title back in 2017, while Adia Barnes and her Arizona team will make their debut appearance.

March Madness is the pinnacle of college basketball, where 64 teams — full of the next generation of WNBA and NBA players — duke it out in a single-elimination tournament over two weeks to crown the best team. The event is known for big moments, upsets and great action.

Speaking to reporters about the historic feat following South Carolina’s win over Texas, Staley said she was “super proud of Adia” and was “cheering for her to get it done.”

“It was not for any other reason besides us being represented at the biggest stage of women’s college basketball,” she said.

“And that’s because there are so many Black coaches out there that don’t get opportunity because when ADs [Athletics Directors] don’t see it, they don’t see it — and they’re going to see it on the biggest stage of a Friday night, that two Black women are representing two programs in the Final Four, something that has never been done before.

“You know, our history here in women’s basketball is so filled with so many Black bodies that for this to be happening in 2021, to me, is long overdue, but we’re proud. We’re happy.

“I know my phone is probably full of text messages of Black coaches all across the country, just congratulating us on doing that, on being present, being in the moment, being able to take our programs to this place.”

Both Staley and Barnes are former WNBA players — the latter winning a title with the Seattle Storm in 2004 — and Barnes revealed she has been inundated with messages from former teammates.

On Friday, South Carolina will face Stanford, while Arizona will meet UConn.

The two women have guided their respective teams to the Final Four in impressive fashion, with Staley’s South Carolina comfortably swatting Texas aside in a 62-34 win, while Barnes’ Arizona powered past Indiana in a bruising 66-53 victory.

It also means Staley and Barnes are the only former WNBA players to have led teams to the Final Four as head coaches.

“I know Adia utilizes all of her basketball knowledge as a player and she’s been a coach long enough that she’s not just a suit,” Staley said.

“It’s always going to be part player in us and that’s why our players … we are so relatable to them. They understand it because it’s coming from a place of ‘we’ve done that. We’re trying to help you get to that place where we can have longevity in our league.’

“Representation matters. It’s nothing against anybody else that lost to us, but when you see two Black women representing in this way, I hope the decision makers who — because there are a lot of jobs out there that you give Black women an opportunity — not just give them the job.

“Bring them in. Interview them. If you don’t hire them, let them know why.

“Let them know why so we can continue to work on and just perfecting what our craft and our profession because there are a lot of people out there that aren’t getting the opportunities that they should because this is exactly what can happen when you give a Black woman an opportunity.

Earlier this month, the NCAA generated backlash over discrepancies between amenities provided to the men’s and women’s basketball teams participating in March Madness games.

The 2021 NCAA Division I women’s basketball championship game is scheduled for April 4.