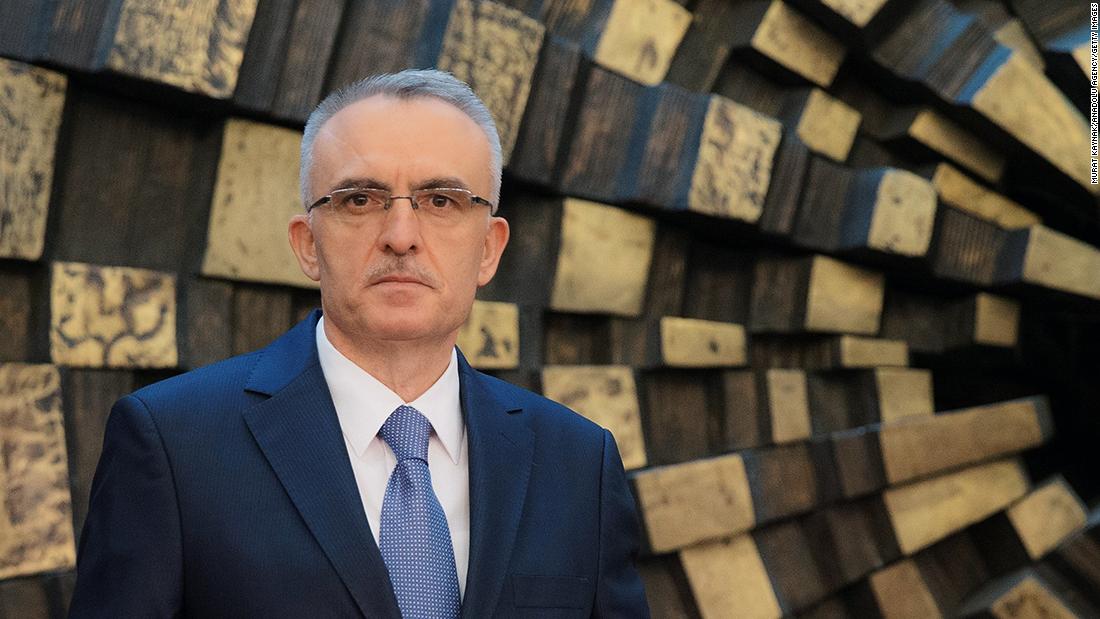 The move will knock investor confidence at a crucial moment for Turkey’s economy and accelerate already rampant inflation, say analysts, which could force the government to resort to capital controls or emergency rate hikes.

The lira tumbled as much as 15% to hit 8.39 per US dollar on Monday, nearing an all-time low. The last time the currency suffered such a sharp correction in a single day was during Turkey’s 2018 currency crisis, which caused it to lose almost half its value against the dollar.

With his removal, “Turkey loses one of its last remaining anchors of institutional credibility,” Phoenix Kalen, an emerging markets strategist at Société Générale, wrote in a research note on Sunday.

Agbal was replaced by Sahap Kavcioglu, a banking professor and former parliamentarian for Erdogan’s ruling Justice and Development Party, known as AKP.

“The shock firing of central bank chief Agbal over the weekend may deal a fatal blow to investor confidence in Turkey,” wrote Win Thin, global head of markets strategy at Brown Brothers Harriman, in a Sunday research note.

Agbal defended the central bank’s economic reforms and independence during his brief tenure, steps that bolstered local and foreign investors’ confidence in Turkish assets. Two days before he was fired, he hiked interest rates by 200 basis points to 19%, higher than expected, after inflation reached nearly 15% in February.

The third large rate hike since his appointment in November “was very well received by the market,” increasing the lira’s attractiveness and demonstrating Agbal’s commitment to “keep inflation on track to fall in the second half of the year,” according to Rabobank strategists.

“However, this bullish scenario for the lira was left in tatters,” they wrote in a note to clients on Monday. “We are seriously concerned about the outlook for inflation and economic activity.”

Win said that the fallout could even push the lira to 8.58 per US dollar, the all-time high, and may “even surpass it.”

Erdogan believes in an unorthodox approach to monetary policy based on keeping interest rates low to avoid inflation. Kavcioglu, the newly appointed head of the central bank, has defended similar approaches. He was a member of parliament in AKP from 2015 until 2018, and wrote columns for the pro-government Yeni Safak newspaper.

“At this point, it doesn’t matter who Agbal’s replacement is or what they say, as it’s clear that Erdogan is running the show,” Win said.

Agbal’s removal will lead to a sell-off in Turkish assets, which could weaken the currency further and drive inflation even higher at a difficult juncture for Turkey’s economy. The country is battling a spike in coronavirus infections and could lose a second summer tourism season as Europe struggles to contain the virus.

Turkish companies are also highly leveraged with a large amount of foreign currency denominated debt, according to the Organization for Economic Cooperation and Development. Any weakening in the currency will make it harder for them to service debts and recover from the pandemic.

“Turkey may soon be headed towards another currency crisis,” said Kalen of Société Générale, pointing to an expected exodus in foreign and local investor capital, and the fact that the central bank has just $11 billion in foreign currency reserves available to defend the currency.

That could prompt the government to intervene in financial markets, Kalen added. If the government is not able to stop the currency’s slide, it may resort to controls that limit the flow of foreign capital.

For now, Turkey is likely to deploy unconventional measures. Kavcioglu will likely undo the most recent rate hike at the central bank’s next meeting in April and “deploy substantial reserves” between now and then to try and stabilize the lira, Kalen said. But he is likely to “lose the currency battle with markets and ultimately have to engage in emergency hikes down the road” to halt the currency’s decline.

There are some worries that negative sentiment in Turkey could lead to a sell-off in emerging markets more broadly, which is what happened during the country’s currency crisis in 2018. But for now at least, that risk appears to be contained.

— John Defterios and Julia Horowitz contributed to this report.