Protect Your Immune System Today!
Home U.S These are the people at the center of the Derek Chauvin trial
U.S 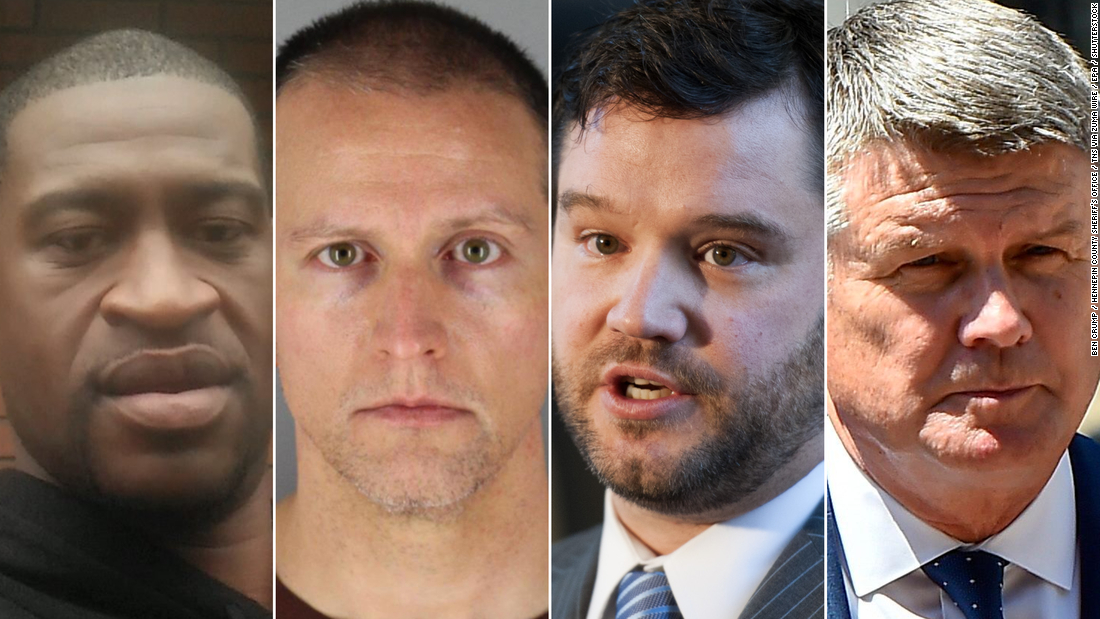 His death sparked protests across the United States, with demonstrators calling for justice in the death of the 46-year-old Black man. Chauvin is on trial on charges of second-degree unintentional murder and second-degree manslaughter.

Here are some people at the center of Chauvin’s trial.

In Houston, where Floyd grew up, people called him by his last name. He worked security at a restaurant, and had a reputation for being dependable — there for people when they were down.

He moved to Minnesota for work and to drive trucks, according to friend and former NBA player Stephen Jackson. Floyd has two daughters, the youngest of whom is 6, according to Jackson.
Since his death, Floyd has become a symbol for a global movement demanding change in policing and the treatment of Black and Brown people. Pictures of him, Breonna Taylor, Ahmaud Arbery and Rashard Brooks circulated on social media last year, with their faces becoming associated with the Black Lives Matter movement. They were also immortalized on murals across the country.

An 18-year veteran of the Minneapolis Police Department (MPD), Chauvin was held at a maximum security prison for about five months until he posted bail in October 2020.
He is facing charges of second-degree unintentional murder and second-degree manslaughter.
Days after he knelt on Floyd’s neck, it was found that Chauvin had 18 prior complaints filed against him with the Minneapolis Police Department’s Internal Affairs Division, according to the department.
The heavily redacted personnel files released by police detail a 2007 complaint from a woman alleging that Chauvin pulled her from her car, searched her and placed her in the back of a squad car for going 10 miles an hour over the speed limit.
Chauvin’s personnel file also shows when he applied for a job with the department, he said he served in the US Army as a member of the military police and had worked as a custom protection officer for a security services company. The files note Chauvin worked for McDonald’s and another restaurant in the mid-1990’s.

Chauvin was initially hired by the police department as a community service officer in January 2001, and served for about eight months before he was promoted to police officer, the personnel files show.

The former officer has kept a low profile since Floyd’s death. Not too much is known about his personal life — but a former club owner told CNN last summer that Chauvin worked as an off-duty police officer for El Nuevo Rodeo club for nearly 17 years.

Floyd also worked at the club, but it is unclear whether the two ever worked together or even knew each other.

An attorney for Chauvin’s wife filed for a dissolution of marriage the day after he was arrested.

The other three officers on the scene

Lane, one of the officers who helped restrain Floyd, had been on the police force for four days when Floyd died, according to Lane’s attorney Earl Gray.

Lane joined MPD as a cadet in February 2019. He does not have a history of complaints.

Lane earned a bachelor’s degree in criminology from the University of Minnesota in 2016 and then worked as a juvenile corrections officer for Hennepin County and as an assistant probation officer.

Lane’s police application states he previously worked as a server and bartender at various restaurants and was a sales associate at Home Depot. Under volunteer experience, Lane listed that he helps Somali youth in the Cedar Riverside neighborhood with their homework and tutors them in science and math activities.

He was fired from MPD in the aftermath of Floyd’s death.

One of the officers who helped restrain Floyd, Kueng was working his third shift when Floyd died, Chauvin was his training officer, according to Kueng’s attorney, Thomas Plunkett.

Kueng was hired by MPD in December 2019 and joined the department as a cadet in February 2019.

He had no prior complaints and earned a bachelor’s degree in sociology from the University of Minnesota, according to his personnel file.

In his job application, Kueng said he worked as an asset protection detective for Macy’s from 2014 to 2017 and in a temporary job with Target. He listed that he can speak, read and write Russian.

He was fired from MPD in the aftermath of Floyd’s death.

Thao stood near the other officers as they restrained Floyd. He had been with MPD since 2012 before being fired in the aftermath of Floyd’s death.

MPD documents show he had six complaints filed with internal affairs, five of which were closed without discipline as of last year.

Thao worked as a security guard, a stocker at a grocery store and trainer at McDonald’s before becoming a police officer. He attended the North Hennepin Community College and was working toward an associate degree in law enforcement, but he did not graduate, his personnel file shows.

Cahill, the judge presiding over the Chauvin case, was appointed to the Fourth Judicial Circuit in 2007 and has won reelection three times. His current term expires in 2027, according to his profile on the Minnesota Judicial Branch website.

According to CNN affiliate WCCO-TV, Nelson has blasted prosecutors, saying the way in which they have presented evidence has been unorganized and delayed.
Because of this, Nelson asked Cahill in December to push back the start of the trial. In January, Cahill set the date for the trial and ruled Chauvin would be tried separately.

Chauvin’s defense attorney has not made comments to CNN about the trial.

Gov. Tim Walz decided last June to hand the Floyd investigation and case to Ellison, who is a former US congressman.
Ellison will serve as the lead for the prosecution team, according to a release from his office. The presenting attorneys for the case include Assistant Attorney General Matthew Frank, Jerry Blackwell and Steve Schleicher.
In 2006, Ellison became the first Muslim American elected to Congress. His tenure ended in 2019, when he was sworn in as Minnesota’s attorney general, according to the attorney general’s website.

When he was tapped to lead the prosecution in the Floyd case, Ellison admitted police officers are difficult for prosecutors to convict even in what the public might view as the most clear-cut cases.

“Trying this case will not be an easy thing,” Ellison said last June. “Winning a conviction will be hard.”

Since then, Ellison’s team has worked to reinstate the third-degree murder charge that was dropped in October and move the trial to June because of the Covid-19 pandemic.

The Minnesota Appeals Court ruled March 5 that a lower court should reconsider the motion to reinstate the charge. It is not clear what impact, if any, the ruling could have on the trial’s start date.

Frank is the assistant attorney general of Minnesota. Ellison appointed Frank as the lead presenting prosecutor of Chauvin’s case in June 2020.

Before he was a member of the attorney general’s office, he was a public defender in Anoka and Sherburne counties and an assistant county attorney in Wright County, according to the news release. He obtained his law degree from Hamline University School of Law, now Mitchell Hamline School of Law.

Facebook
Twitter
Pinterest
WhatsApp
Previous articleIndia could be back as the world’s fastest growing economy this year
Next articleMore than 100,000 migrants encountered at US-Mexico border in past 4 weeks, data shows