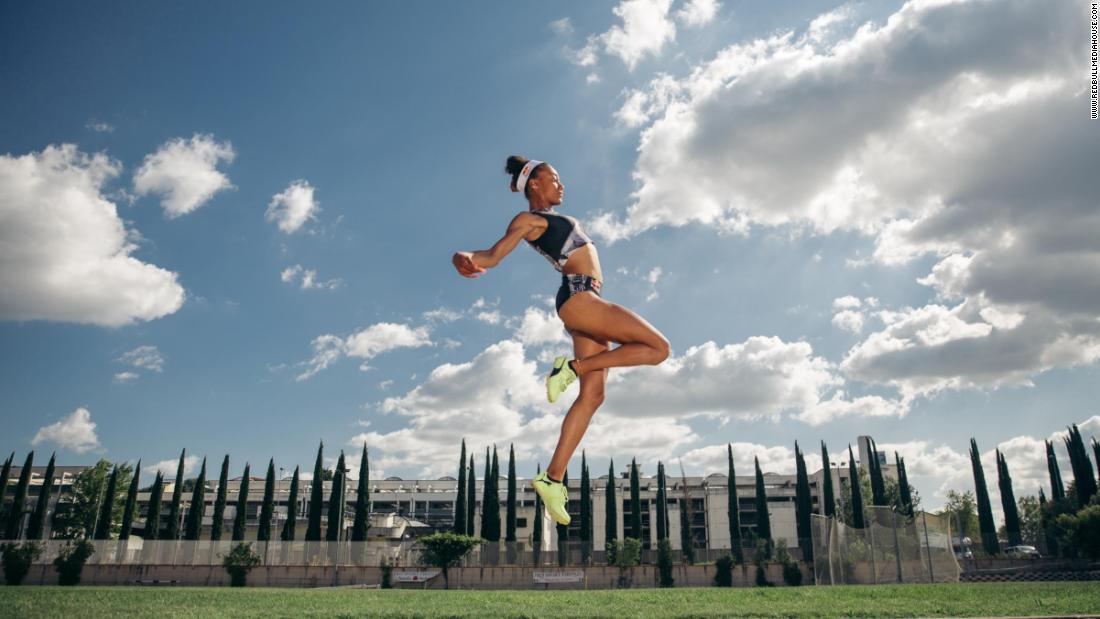 Even now, two-and-a-half months on from her jump at the Italian Indoor championships, the 18-year-old struggles to explain how she felt as she set a new junior indoor world record and equaled the Italian indoor record.

“I can’t describe it. It was somehow like I had this blackout and then I realized everything, and it was like: Wow,” Iapichino tells CNN Sport.

Iapichino’s mother, two-time Olympic silver medalist Fiona May, is the only Italian to jump the same distance indoors. The two now share a space in the country’s long jump record books, but that’s not to say May is at all concerned about ceding records to her daughter.

“She was so happy for me. And she doesn’t mind if one day I will break her records […] she always pushes me to try my best.”

Iapichino is now preparing to compete at the Tokyo Olympics later this year. Her mother, who was born in Britain but competed for Italy after marrying former pole vaulter Gianni Iapichino, has already passed on a few words of advice having competed at five Olympics during her career.
READ: Tokyo Olympics can be delivered ‘safely and securely,’ says World Athletics president Coe

“She said that you need to be there and feel the emotions, to feel the atmosphere that is typical of the Olympic Games,” says Iapichino. “She couldn’t describe it to me. She said you need to feel it on your own skin.

“I sometimes watch my mom’s videos. It’s so strange seeing my mom as an athlete because all my life, I saw her as my mother, as the one who tells me to do homework, to not go to bed late.

“But she was a legend — and she is a legend here in Italy — and this makes me really proud of her.”

Named after Larisa Berezhnaya, a former long jumper competing for the USSR and Ukraine and May’s rival during the 1990s, it might seem like Iapichino was always destined to take up the sport herself.

But after starting her sporting life as a gymnast and despite her family background, long jump never seemed like an obvious choice.

“When I started athletics, I hated long jump, it was my worst event,” Iapichino says.

“I was a sprinter and a hurdler and one day my old coach asked me to do this long jump competition just for fun […] and I started jumping far.

“From that moment, I was like: ‘Oh, it’s not that bad.’ And then I started training for that, and here I am.

“It was pretty casual and I’m really happy with it. My first love was hurdles, but my heart is with long jump. I mean, it’s something that maybe is pretty close to my heart because it’s a family thing also.”

At a national level, Iapichino has achieved considerable success — most recently, her record-breaking jump in Ancona this February which earned her the Italian indoor title.

She was also crowned the U20 European champion in 2019 after beating athletes almost two years her senior — something she’s grown accustomed to throughout her career.

“But the senior competitions are different. They are a battlefield, literally, but it’s quite fun and stimulating to compete with these women that are so inspiring.”

Iapichino is now setting her sights on jumping over seven meters — “a really important measure in women’s long jump” — and beyond that there’s her mother’s Italian record of 7.11m as a distant target.

READ: Olympic triple jumper and rapper Will Claye on why his music career is more than a hobby

She also leads a busy life outside of athletics. On top of training for two-and-a-half to three hours a day, five times a week, Iapichino is also a senior in high school and will sit her final exams in June. She then plans to study law in Florence while still pursuing her athletic career.

“I usually study till late. Sometimes, I try to find little pieces during my free time to just copy some notes, study. So it’s quite difficult, but with hard work, everything’s possible.”

Iapichino will be 19 and just out of high school when she competes at the Olympics, which start on July 23.

Her main emotions ahead of the Games are “pretty much excitement,” even though her family may not be able to travel with her to Tokyo after international spectators were banned from attending amid the pandemic.

“They will be with me through the phone, video calls and text messages,” says Iapichino.

“Having your family there, your first Olympics, I think is quite emotional and important, but the situation is pretty complicated. So we’ll see.”

If her family can’t be with her in person in Tokyo, then the lessons she has learned being brought up by two former athletes certainly will.

“I was always raised with the values of sports — hard work, determination — so that influenced my sports career pretty much,” says Iapichino.

“From the moment I started doing sports and even in life, I always rely on these values that they teach me from the world. Sports have been in my life since forever.”

Facebook
Twitter
Pinterest
WhatsApp
Previous articleJuventus wins Coppa Italia as Cristiano Ronaldo cements dominance in Italy, England and Spain
Next articleTim Tebow is back in the NFL after signing with the Jacksonville Jaguars