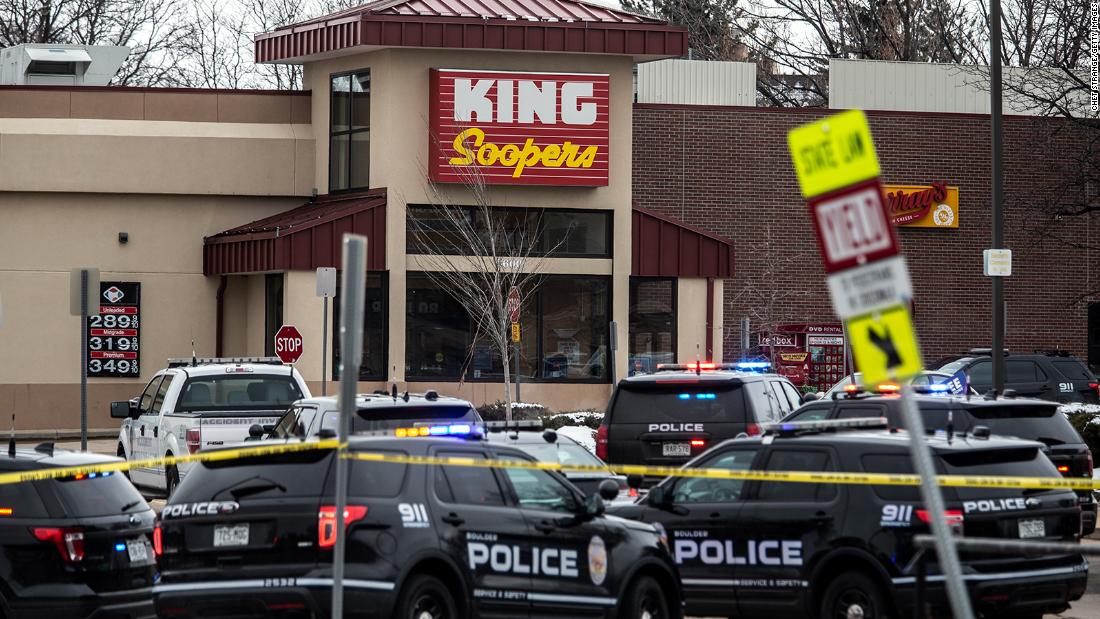 Ahmad Al Aliwi Alissa, of Arvada, near Denver, is accused of opening fire Monday afternoon at the King Soopers store in the university city of Boulder, killing people ranging in age from 20 to 65, authorities said.

Police took the suspect into custody at the store Monday afternoon, less than an hour after panicked 911 callers told dispatchers of the killings unfolding there.

Alissa, who at some point was shot in the leg, was in stable condition at a hospital Tuesday, and will be jailed after his treatment is finished, authorities said.

The motive in the Boulder killings — one of several mass shootings in the US over the last week — isn’t immediately known, and the investigation will take a long time, authorities said.

“I promise that all of us here will work tirelessly … to make sure that the killer is held absolutely and fully accountable for what he did,” Boulder County District Attorney Michael Dougherty said Tuesday at a news conference in Boulder.

Officers had exchanged gunfire with Alissa at the store, but it wasn’t clear who shot him, Boulder Police Chief Maris Herold said.

The suspect has “lived most of his life in the United States,” Dougherty said Tuesday, without elaborating.

The shootings in Boulder, home to the University of Colorado’s main campus nestled by the Rocky Mountains northwest of Denver, came less than a week after shootings at three spas in the Atlanta area left eight people dead.
In the last week alone, the United States has seen at least seven shootings in which at least four people were injured or killed.

Witnesses have described scenes of terror and panic at the supermarket Monday.

Police said they were called there about gunfire around 2:40 p.m. MT Monday; the suspect was taken into custody at 3:28 p.m., Herold has said.

A shooter had gunned down at least one person in the parking lot before going inside, according to Anna Haynes, a college student who was looking from her apartment window across the street.

Haynes heard what turned out to be gunshots, and then looked outside and “saw a body in the middle of the parking lot. “

“I also saw the gunman himself holding a semiautomatic rifle,” Haynes, editor-in-chief of the University of Colorado’s CU Independent.

“On his way to the entrance, had turned around and was shooting rapid-fire at one particular target. … And then he turned around, he entered the building through the handicap entrance.

“And a few seconds later, I saw people running out of the building, I heard screaming, I heard people leaving in their cars, and it just evolved into chaos within just a couple of minutes.”

Ryan Borowski told CNN he was grabbing a bag of chips and a soda when he heard the first shot and saw a terrified woman running toward him. By the third shot, he was running with her toward the back of the store.

They and others gathered with employees in the back.

“I saw a lot of very wide eyes. … The employees in the back of the house didn’t know what was going on, so we told them that there was a shooter, and they told us where the exit was,” he told CNN Tuesday.

CNN affiliate KMGH’s helicopter recorded police leading several people away from the store — including a shirtless man being taken from the supermarket.

The man had what appeared to be blood on his arm and right leg and his hands appeared to be cuffed behind him as two officers escorted him away. The man was taken away in an ambulance.

Police didn’t immediately say whether that person was involved in the shooting.

Police officer and a store manager among those killed

The slain officer, Talley, was one of the first to respond to the scene, according to Herold. Talley had joined the Boulder police force in 2010, she said.

“He was, by all accounts, one of the outstanding officers of the Boulder Police Department, and his life was cut far too short,” Dougherty said.

Olds, 25, of Lafayette, was a front-end manager at the store, her uncle, Bob Olds, told CNN.

She was a “strong, independent young woman” who was raised by her grandparents, Bob Olds said.

“She was so energetic and charismatic and she was a shining light in this dark world,” he told CNN.

In scanner traffic, officers radioed that they were in a gunfight. They continued to report that they were being fired at with multiple rounds through at least 3:21 p.m. local time.

Ambulances and multiple law enforcement agencies arrived at the store, which is part of a large shopping center with a two-story strip mall next door. “He’s armed with a rifle, our officers shot back and returned fire — we do not know where he is in the store,” an officer said, according to a transcript of the audio.

One senior law enforcement source told CNN the weapon used in the shooting was an AR-15-style rifle.

Steven McHugh said his son-in-law and two granddaughters were there when a gunman attacked.

His son-in-law, Paul, was third in line for a Covid-19 vaccine and his seventh- and eighth-grade granddaughters were on the phone with their grandmother. On the other end of the phone, their grandmother heard at least eight shots ring out.
The woman at the front of the line was shot, McHugh told CNN’s Don Lemon. Paul grabbed the girls and hurried them upstairs to take cover in a coat closet above the pharmacy, he said. The girls said they were afraid because the coats weren’t long enough to hide their feet.

“The intensity, the awfulness is going to last for the rest of their lives,” he said.

At one point, police were seen moving on the roof. McHugh told CNN affiliate KCNC that his relatives were evacuated via the roof.

“They hid, ran upstairs, were hiding in a coat closet for the last hour,” McHugh told KCNC. “Half a dozen cops came in through the roof and got them and then told them, you know, ‘Stay quiet.'”

Calls for action against gun violence

On the heels of March 16’s three spa shootings in Atlanta, the latest attack stoked calls for action and expressions of fear.

“This past weekend it was a house party in Philadelphia. And last week it was an armed attack on Asian American women in the Atlanta area,” former US Rep. Gabrielle Giffords of Arizona, who is a shooting survivor, said in a statement. “This is not normal, and it doesn’t have to be this way. It’s beyond time for our leaders to take action.”

The tragedy in Colorado feels especially personal, Giffords said, considering how the shooting she survived outside a Tucson grocery store devastated her community.

“It’s long past time for Congress to take meaningful action to keep deadly weapons out of the wrong hands,” he said.

The National Rifle Association tweeted on Monday quoting the Constitution’s Second Amendment: “A well regulated militia, being necessary to the security of a free state, the right of the people to keep and bear arms, shall not be infringed.”

King Sooper is owned by the Kroger company, which said the store will remain closed during the police investigation.

“The entire Kroger family offers our thoughts, prayers and support to our associates, customers, and the first responders who so bravely responded to this tragic situation,” the company said via its verified Twitter account.

Correction: An earlier version of this story misspelled victim Denny Stong’s last name based on information provided by the Boulder Police Department.