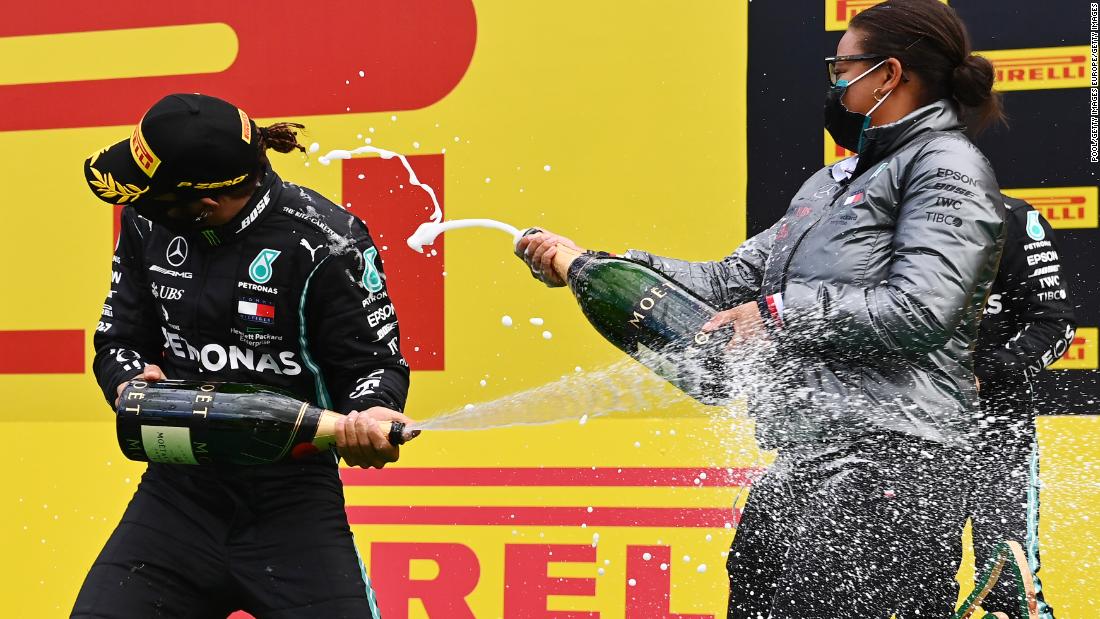 “My first reaction was: ‘Are you sure? I don’t think you’ve got the right person — it’s not me!'” she recalls. “But it all happened so quickly and before I knew it, I was walking up onto the podium.”

As is customary, Mercedes chooses a team member to go up and collect the Constructors’ trophy on behalf of them and Petronas, Mercedes’ title and technical partner, after each race win.

It was a poignant moment for Travers — a trackside fluid engineer — to be selected, as she became the first Black woman in history to stand on a Formula One podium.

“I still can’t put it into words for you,” she tells CNN’s Amanda Davies. “It was such a surreal moment for myself and a momentous occasion for myself and my family. I didn’t have time to inform my family beforehand, but my parents love the sport, so they were there from home watching, screaming.

“My sister sent me videos afterwards, so to see their response and the response I got from the entire world, it just touched my heart and I’m so thankful to Petronas and to Mercedes for allowing me to represent them on the podium.”

In a lengthy Instagram post after the race, Hamilton paid tribute to Travers for being selected from more than 7,000 applicants and for wanting to “inspire young black children, and children of colour to believe that they can do it too.”

In the moment, Travers admits she wasn’t aware that she was making history, but was “completely speechless” when it was pointed out to her afterwards. “The emotions just came to me,” she says.

Travers was born in the Zimbabwean capital of Harare and went to school there until her family moved to the UK when she was 10.

She comes from a family of motorsport fanatics and recalls the stories her parents and older brother would tell her of the F1 grands prix held in neighboring South Africa during the early 1990s.

It helped, too, that both her father and grandfather were engineers and Travers’ quickly developed a passion in her dad’s engineering workshop.

“That liking for the sport just grew as I got older and older, to a point where I began traveling to some races with friends,” she says. “I just really knew that I wanted to work in the sport.”

Knowing that it could potentially get her into F1, Travers decided to specialize in chemical engineering. Ultimately, however, she says it was important to find a career that she enjoyed, as the competitive nature of the F1 meant earning a place in the sport was anything but a foregone conclusion.

But even then, Travers still dreamed that one day she would stand on a F1 podium. When she finally got there, it was a realization of everything she and her family had worked towards.

“The emotions really got the best of me at that point,” she says. “I was quite lucky to be wearing a mask, you couldn’t see the tears in my eyes, but it was a great feeling and it’s completely different to being on the other end with the entire team.

“But knowing that the team was there standing with me and supporting me in that moment and we’re all celebrating the win that we had worked so hard for that weekend, it was a great feeling and I’m just so thankful that I got to experience it from both sides.”

‘Step in the right direction’

In the wake of George Floyd’s death last year, sport around the world began a reckoning with what it was doing about racial inequality.

F1 is among the least diverse sports in the world; in fact, Hamilton is the only Black driver to have ever raced in the sport. The importance of his presence, in particular for young Black kids dreaming of one day making it in the sport, cannot be overstated.

“What I will say is growing up watching sports, it was Lewis that gave me that extra push of seeing someone like me on the TV,” Travers says. “I knew that it was possible for me to get into the sport if I really put my mind to it and worked hard — and that’s what I did.”

Led by Hamilton, one of the most vocal athletes on the planet, Mercedes has been at the forefront of F1’s push to try and make the sport more inclusive and diverse. Last season, the team painted its iconic ‘Silver Arrow’ cars black in a “stand against racism and all forms of discrimination.”

The move came a week after the six-time world champion announced the formation of the Hamilton Commission, a research partnership with the Royal Academy of Engineering dedicated to exploring how motorsport can be used to engage more young people from Black backgrounds with STEM (science, technology, engineering and mathematics) subjects and ultimately employ them on racing teams or in other engineering sectors.

Mercedes said that the move is “a public pledge to improve diversity” at the team.

At the time, the team said while employees say “the experience within our team is an inclusive one,” just 3% of the workforce identify as belonging to a minority ethnic group and only 12% of employees are women.

Mercedes says it has established its intention to address this disparity with “positive action” and have said that the “commitment to doing this is irreversible.”

“It’s a great feeling to be a part of this team and it’s been very positive for me to have been included from the moment I walked in to the garage,” Travers says.

“[I’m] extremely happy and very proud to have been the first Black female on the podium. I feel like the sport’s making a step in the right direction from last season and there are many more changes that will come into play in the future and hopefully the diversity and inclusion can improve in the next few years.

“It’s not something that’s going to improve overnight, but I certainly think by me being there — and some of the other mechanics throughout the pit lane — it’s a standpoint and it’s a step in the right direction.”

After her moment of history, Travers says her inbox was flooded with messages, but there were a few that stood out more than most.

“The ones that really touched me the most were the young girls telling me that I have now open their eyes and they can see someone like them pursuing such a career in F1,” she says.

“So for that to happen, it really touched my heart.”

Is it safe to travel this summer? A medical expert explains

(CNN) — As more people get vaccinated and coronavirus infection rates drop in many parts of the world, people are traveling again in...
Read more
Load more