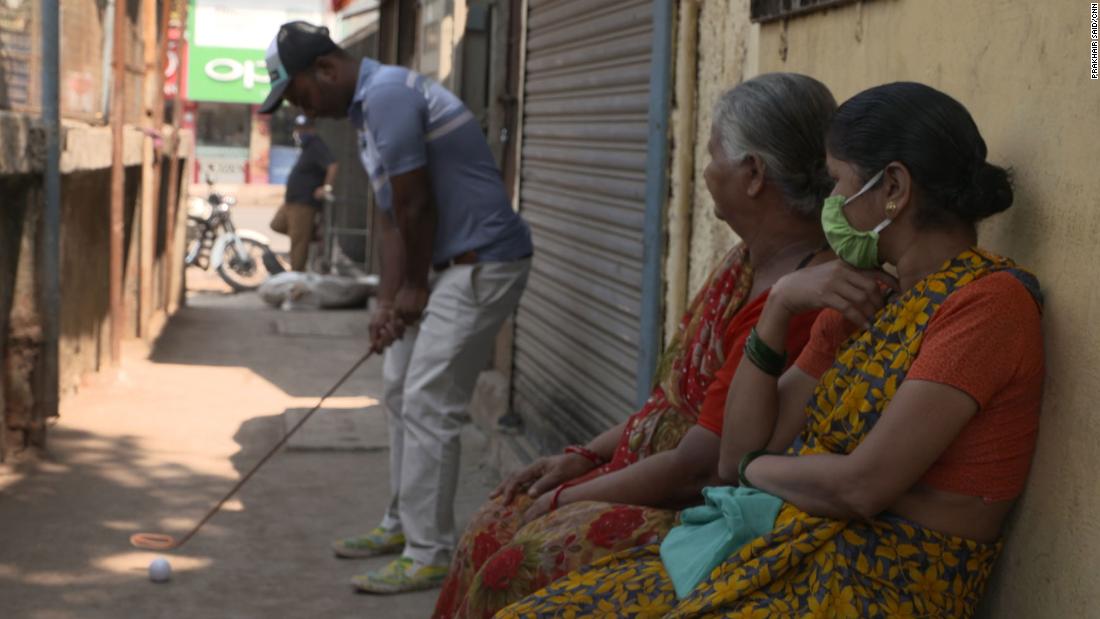 But thanks to some innovative thinking, residents of some of the poorest areas of Mumbai have been using the bumps and lumps of the street as their course.

Here there’s no soundscape of polite clapping from watching fans or birds chirping — just a cacophony of residents poking their heads out of windows, buses traveling underneath and the hooting of tuk-tuk horns.

Slum golf, a version of the game using homemade clubs and balls, deploys the cracks and crevices in the Chembur locality of the hustling, bustling city for its course and small divots in the ground as its holes.

The makeshift game was created in 2000 in Mumbai — India’s financial capital with a population of more than 12 million — by Suresh Mehboobani and others outside their hours working as caddies at the Bombay Presidency Golf Club (BPGC) at a time when they were not permitted to play for free.

Golf isn’t the most popular sport in India, but Mehboobani is hoping his makeshift version of the sport will prove an introduction — especially to his 6-year-old daughter Ashmi — to the more traditional game.

“Everyone likes cricket in India,” Mehboobani told CNN Sport. “I [hope] that people watch our videos and they like golf as well.

Although the dark red ball and the wooden bat hook many Indian youngsters, Mehboobani’s interest has always been on a small, white ball and long, thin golf clubs.

On his route to and from school, he walked past a golf club and after watching through the fence while members drove, chipped and putted, Mehboobani was hooked.

He picked up a job at the BPGC caddying to sate his passion for the sport. But when he wasn’t permitted to play at the members only club for free, he came up with another method to play, reimagining the Chembur slums as a golf course, with tee positions varying from on the floor to the tops of buildings.

After some trial and error, Mehboobani and others found they could use waste material from buildings to fashion clubs — hammering the end to form the face of the club — and use cylinder pipes as grips.

As for the ball, he insists players use plastic rather than proper golf balls so to not “draw blood” if they hit a fellow player, passerby or resident of the slum.

In its heyday, over 50 people — typically caddies at the club — used to congregate on their days off on Monday to play slum golf.

The local club has also opened its arms to slum golf, with some members choosing to try their hand, as well as an Indian professional golfer and an international player traveling to Mumbai to sample this unique version of the game.

“They had a great reaction; they said they are having more fun outside than playing inside (on the course). They get to hit different shots, from above the bus, above cars. Inside you can’t hit shots like this; it’s all grass, but here you can hit the ball over cars, rooftops.”

However, now that the BPGC has allowed all caddies to play there on a Monday for free, “slum golf isn’t happening much anymore,” admits Mehboobani.

Although Mehboobani and his colleagues have found a more traditional locale to play golf, he’s still hopeful that slum golf can be an introductory way into a sport which, as he himself knows, can often be inaccessible.

His daughter Ashmi is an embodiment of that desire.

Mehboobani introduced her to the game when she was just five years old after she saw her father playing on the streets and expressed her interest in “hitting the ball.”

During the time when the BPGC didn’t allow caddies to play on its course and they took up playing on the streets, a video of Ashmi playing golf went viral which, according to her father, was one of the reasons for the BPGC allowing them in. BPGC didn’t immediately respond to CNN’s request for comment.

Through her father and her coach, who also runs an academy, she has developed an early love for the game, already adopting Tiger Woods as her idol.

Mehboobani is hoping that his daughter’s early start on the streets will propel her to success later in her life.

“We [hope] to make her the ladies champion because if the club has supported her this much, she is likely to show good results in the future. She will make the club proud, and she will make the name of her mother and father shine as well.”

It’s not just in India where street golf is a thing.

In Europe, urban golf was born in the late 1990s when a group of Germans took to the streets of Berlin armed with real balls and clubs and began creating makeshift holes for themselves around the city.
Visit CNN.com/sport for more news, features, and videos

Each year an official cup competition is contested with the 2021 event set to be held in Switzerland in July.

Players might have ultimately chosen the green fairways and greens over the concrete roads and roofs, but slum golf provided them with a taster and opened doors to a sport previously unattainable to many in Mumbai.

Once playing from rooftops, these golfers and those who are following them are now shooting for the sky.