Say it isn’t snow! Winter-like weather is forecast into next week 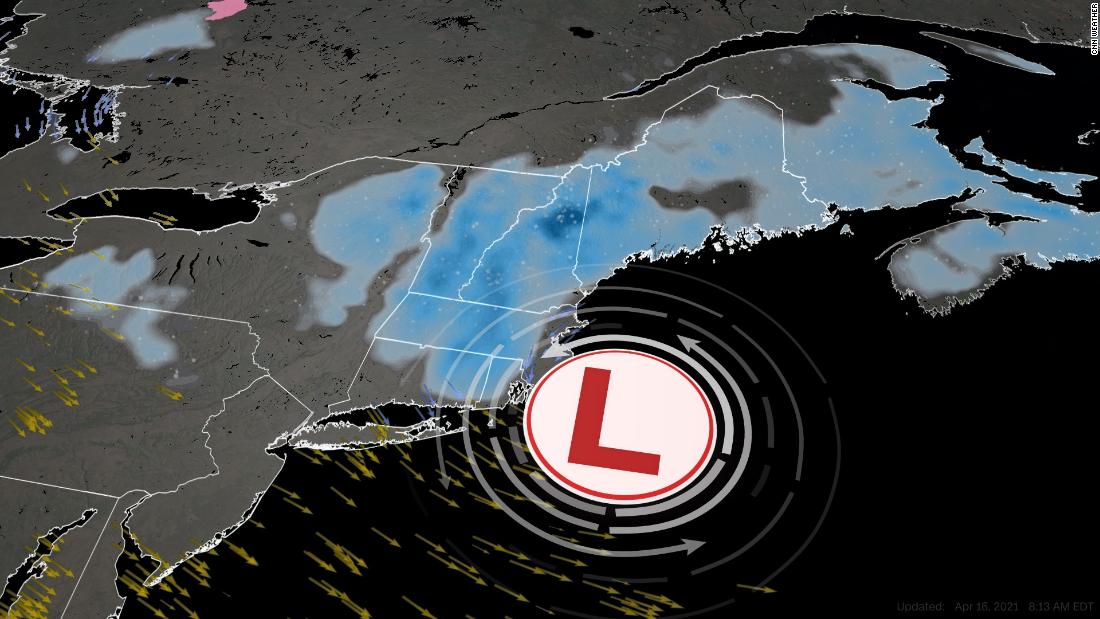 Two areas in the US will be experiencing snow on Friday: New England, and the central High Plains and Rocky Mountains.

Across New England, a low pressure system moving up the coast will bring heavy snow to portions of the interior of the region. The major cities near the coast across the broader region, including Providence in New England and New York in the Mid Atlantic, will deal with a cold rain and wind.

“A late season snowstorm will continue today across the higher terrain of the Berkshires and Worcester Hills; while rain and snow along with some minor accumulations are possible in some lower elevations,” said the National Weather Service (NWS) office in Boston.

Southeastern Massachusetts through the New York City area will have passing showers throughout Friday and into the first half of Friday night. Along the coast, especially in the Boston area, winds could gust up to 50 mph during the day Friday.

Snow will be widespread from northeastern Connecticut through much of Maine. This snow will extend back into some of the higher elevations in New York.

Colder air is moving closer to the coast, allowing for rain to transition to snow in the Boston area Friday morning. This snow could change back to rain midday depending on how heavy the precipitation is.

In the valleys of the mountains in New England, temperatures will not be significantly cool so some mixing or even a changeover to rain could be possible.

Snowfall totals will vary by elevation, with 9 to 10 inches possible in the highest of elevations, according to the NWS in Boston. The office is also warning about some possible power outages, considering how wet and heavy the snow is.

Up to 7 inches of snow has already fallen in New Hampshire and Vermont, as of Friday morning, and additional snow is expected.

Temperatures will gradually warm up this weekend in the storm’s wake, turning to above average on Sunday and Monday before another cool down returns by mid-next week.

Over a foot of snow has been reported in Aspen Park, Colorado, while the Denver metro area has measured totals around 3-5 inches, as of Friday morning.

Snow will gradually exit the mountainous region Friday and track more toward the central Plains. By midday, the bulk of the snow will be over with in Colorado and Wyoming, except for a few lingering snow showers in the Rocky Mountains.

Get your latest forecast here

As all of the moisture tracks into the Plains, the first half of Friday will be snowy across western Kansas and Nebraska, but warmer air will end up dominating by the end of the day. This will allow for a transition from snow to rain as the precipitation continues to move east.

A few more inches of snow will be possible Friday, especially in western Kansas and Nebraska. The National Weather Service office in North Platte, Nebraska says, “Additional snowfall amounts across the advisory area will mainly range from 1 to 3 inches with locally 4 inches.”

Temperatures are even cooler relative to normal in this part of the country. Highs on Friday could be over 20 degrees below average from western Nebraska through western Texas. A few daily record high temperatures may even be broken in Texas for being the coldest.

After the first round of cool air this weekend moderates, a second round of cooler air will enter from Canada, beginning early next week, for the northern Rocky Mountains through the upper Midwest. Highs could be nearly 30 degrees below normal for this region. Some cities, like Fargo and Rapid City, may struggle to rise above freezing during the day Sunday.

Also accompanying this new push of cool air will be another chance for snow. Snow could be possible across much of the northern Rocky Mountains and Plains and into the Midwest between Sunday and Tuesday.

Current model guidance does not suggest any significant snowfall for most locations, with a forecast of 1-3 inches in most areas.

This cool air mass will weaken as it moves farther south and east, so for early next week, areas east of the western mountains are forecast to have high temperatures 5 to 15 degrees cooler than the typical temperature for this time of the year.

This cooler air should continue into much of next week.