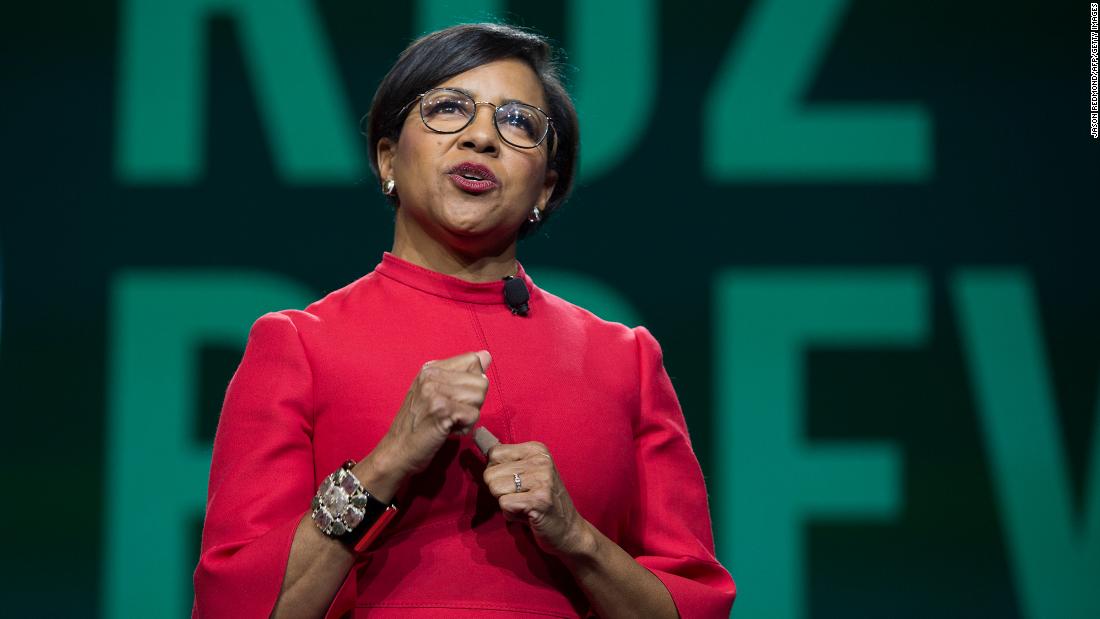 Former Xerox chief executive Ursula Burns became the first in 2007 before stepping down in 2017. Ex-Bed, Bath and Beyond chief executive Mary Winston’s interim tenure only lasted about six months in 2019 before she was replaced by former Target chief merchandising officer Mark Tritton.
Today, there are only four total African Americans actively serving as Fortune 500 CEOs, including Brewer. Kenneth Frazier has served as head of Merck since 2011. There’s also Lowe’s chief executive Marvin Ellison and TIAA-CREF CEO Roger Ferguson Jr. who is stepping down. JPMorgan Chase executive Thasunda Brown Duckett, a Black woman, is set to replace Ferguson on May 1.
Duckett and Brewer are among the paltry 3.3% of Black senior and executive leaders presently working in corporate America, according to Equal Employment Opportunity Commission data.

A new Black woman CEO is a game-changer for Black leaders and the corporate world, according to Michael C. Hyter, president and CEO of the Executive Leadership Council, a non-profit that works to increase the number of Black C-suite and boardroom executives.

“Diversity at the top drives diversity throughout the corporation,” Hyter told CNN Business over the weekend. “There is a tendency among CEOs to groom senior executives who look like themselves, requiring intentional efforts to seed succession plans with more diverse candidates with proven track records.”

Who is Rosalind Brewer?

Brewer, 59, is the youngest of five children born to General Motors factory workers George and Sally Gates in her Detroit hometown in 1962. She grew up in the Motor City before attending Spelman College — one of the nation’s top Historically Black colleges and universities — in Atlanta, where she earned a B.S. in chemistry in 1984.
The married mother of two also attended the advanced management program at the University of Pennsylvania’s Wharton School of business and earned additional degrees from the University of Chicago Booth School of Business and Stanford Law School’s Directors’ College.
She spent 22 years working for paper manufacturer Kimberly-Clark (KMB) where she started as a research technician and later took on an administrative role. At Kimberly, she developed a strong understanding of consumer packaged goods and eventually became the company’s president of manufacturing and global operations.
In 2006, Brewer left Kimberly-Clark to become a vice president at Walmart (WMT), where she again climbed the corporate ladder over the course of six years. Eventually she was named president of the Walmart US East business unit, leading a team responsible for more than $100 billion in annual revenue.

Brewer made history in 2012 when she was named CEO of Sam’s Club, which is owned by Walmart, becoming the first woman and the first African American ever to lead the membership-only warehouse company.

“I’ve also been struck by Roz’s servant leadership when I have visited stores with her,” former Walmart President and CEO Mike Duke said of Brewer at the time. “She always lets her team do the talking, with her focus being on how to better support their needs. … She has strong strategic, analytical and operational skills and has successfully managed a large and complex business.”

In 2017, Starbucks tapped Brewer to become its group president and chief operating officer, leading the company’s global marketing, technology, supply chain, product innovation, and store development organization functions. During her tenure in 2018, the coffeemaker expanded its already-massive global retail footprint and entered a global coffee alliance deal with Nestle to increase the global reach of its consumer packaged goods.
Brewer also helped Starbucks maximize its online retail and marketing efforts as well as its customer engagement experiences. The company expanded its delivery service in China and other east Asian countries in 2018 and opened its 30,000th global store in March 2019.
Starbucks’ hard digital pivot came in handy in 2020, when Covid-19 forced it to shutter hundreds of stores and shift to a curbside pickup strategy.

Throughout her career, Brewer has also been an unapologetic champion of diversity in the corporate world. In 2015, she took heat online from conservatives following an interview with CNN anchor Poppy Harlow after telling a story about the concern she felt when a Sam’s Club supplier sent a group comprised entirely of White men to meet with her.

She was concerned the supplier’s commitment to diversity didn’t match her own, so she called one of the company’s leaders to address the issue.

“Every now and then you have to nudge your partners,” Brewer said during the interview. “You have to speak up and speak out. And I try to use my platform for that.”

The details of the conversation weren’t revealed during the interview, which caught the attention of conservatives on Twitter. Walmart’s president and CEO Doug McMillon defended Brewer from critics who suggested her comments were somehow racist.

“Roz was simply trying to reiterate that we believe diverse and inclusive teams make for a stronger business,” McMillon wrote in a statement. “That’s all there is to it and I support that important ideal.”

In addition to overseeing Walgreens’ vaccine rollout, which is already in high gear, Brewer is expected to drive the company’s digital retail expansion.

“That’s clearly one area of expertise where she specifically should bring some institutional knowledge that should be helpful,” said Michael Cherny, a health care technology and distribution analyst at Bank of America.

Outgoing Walgreens CEO Steffano Pessina had high praise for Brewer’s focus on customer experience and her e-commerce acumen in January when her looming appointment was announced.

“Her relentless focus on the customer, talent development, operational rigor and strong expertise in digital and technological transformation are exactly what [Walgreens] needs as the company enters its next chapter,” Pessina said.