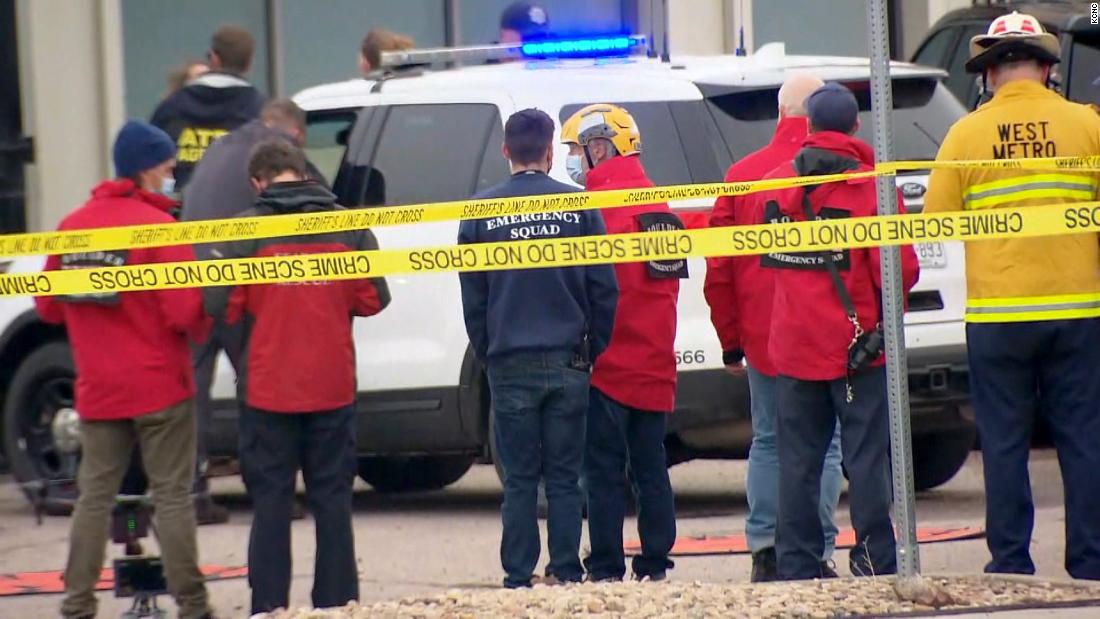 When pressed several times on how many people died, authorities said they couldn’t give a specific number and they were still trying to notify the next of kin.

Authorities did not share any information on the type of weapon used, or any possible motive for Monday’s attack. One senior law enforcement source told CNN the weapon used in the shooting was an AR-15-style rifle.

The only person who suffered significant injuries was the suspect, Yamaguchi said.

The shopping center was still an active crime scene hours after the shooting with a massive police presence.

As events unfolded, CNN affiliate KMGH’s helicopter recorded a shirtless man being taken from the supermarket. The man had what appeared to be blood on his arm and right leg and his hands appeared to be cuffed behind him as two officers escorted him away. The man was taken away in an ambulance.

It was unclear whether the man was involved in the reported active shooting inside the store. At the news conference, authorities wouldn’t comment but they said the suspect was getting medical treatment.

At one point, police officials tweeted they wanted people at another location, about three miles away, to shelter in place because of a “report of armed, dangerous individual.” But it turned out the second site was not connected to the supermarket shooting, officials said.

Some of the shooting was livestreamed by witness

Video taken by an eyewitness to the supermarket shooting appeared to show motionless individuals on the ground inside and outside the store, and purported gunshots are heard.

The video, taken by Dean Schiller, is part of a longer livestream that he showed as the shooting progressed, and police arrived.

In the excerpt, Schiller is heard calling out saying that people need to call 911.

“We don’t know if there’s a shooter, active shooter somewhere,” Schiller says in the video.

Asking what appears to be a store employee whether a shooter went into the store, the man responds, “Yeah, he went in there.”

“He went in the store?” Schiller questioned the man.

“He went right down there,” the man responds.

“Oh, my God,” Schiller reacts. “Guys, we got people down inside Kings Soopers.”

Schiller then says, “Look there’s — ” but doesn’t finish his sentence as two gunshots stop his speaking.

Authorities have not said how many victims were at the scene.

A young man and woman described being in the store when they heard the first shots. The man told KMGH he heard one gunshot and then a few seconds later several more bangs.

“I immediately sprinted over to her and we got out of here and pushed open the emergency door,” said the man.

He said he went back to stand by an emergency exit door and help people get out. He said he never saw the shooter.

At least one person from the scene was transported to Boulder Community Health, spokesperson Rich Sheehan told CNN.

Sheehan said he is not able to release that person’s condition.

Ryan Borowski told CNN he was shopping at the store when he heard the first shots, and by the third one, everyone was running. He said he couldn’t believe it happened in his town.

“Boulder feels like a bubble, and the bubble burst,” Borowski said. “This feels like the safest spot in America, and I just nearly got killed for getting a soda and a bag of chips.”

Ambulances and multiple law enforcement agencies responded to the store, which is part of a large shopping center with a two-story strip mall next door.

At one point, police were also seen moving on the roof of the store. The reason for the roof movements was unclear, but one witness who spoke to CNN affiiate KCNC said his relatives in the store were evacuated through the roof.

“They hid, ran upstairs, were hiding in a coat closet for the last hour,” the man said. “Half a dozen cops came in through the roof and got them and then told them, you know, ‘Stay quiet.'”

Police were also seen looking in cars in the parking lot.

Gov. Jared Polis tweeted that he was aware of the situation.

“Like my fellow Coloradans, I am closely watching unfolding events at King Soopers in Boulder,” Polis wrote. “My prayers are with our fellow Coloradans in this time of sadness and grief as we learn more about the extent of the tragedy.”

King Soopers is a supermarket brand of Kroger in the Rocky Mountain area of the United States.