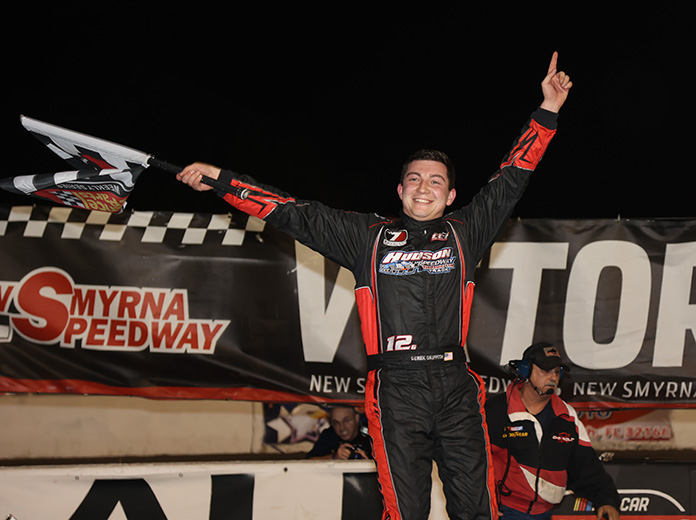 Fast forward to Saturday and Griffith, the defending World Series champion in the David Rogers Super Late Model division, was in his own zip code as he roared to his first victory of the week and third of his career during the World Series.

“It just feels good, especially after last night,” Griffith said in victory lane. “I know we finished on the podium, but we got tore up and had all sorts of issues. To come out and kind of prove ourselves as someone who kind of belongs here, it feels good.”

With a band of storms washing out qualifying, the field for Saturday’s 35-lap feature was set based on the finishing order of Friday’s race. The top-six were then inverted, placing Justin Mondeik on the pole alongside Connor Mosack.

Mosack drove into the lead entering turn one from the top, with fourth-starting Griffith advancing to second by the completion of the first lap.

Griffith took several looks to the inside of Mosack in the first few laps before finally making his move on lap eight. They raced side-by-side for two laps before Griffith completed the pass entering turn one on the 10th circuit.

It was effectively game, set, match from there as Griffith drove away from the field en route to the victory.

“We’re just a small, family-owned team,” said Griffith, who is also scheduled to compete in the ARCA Menards Series opener at Daytona Int’l Speedway on Feb. 13 for Venturini Motorsports. “It’s so cool to come down here and run with these guys and compete.”

Mosack finished more than a second behind Griffith in second, followed by Mondeik in third. Jacob Goede took fourth after holding off a fierce challenge from Jett Noland in the final laps of the race.

Bryan Kruczek picked up his first Sportsman victory of the week during the division’s special 50-lap event, which earned him a $2,000 payday. He muscled his way past Friday’s winner, Matthew Green, during a restart with six laps left to earn the trophy and paycheck.

Noland doubled his fun in the Pro Late Model class as he outran Kody Swanson for the second-straight night. Travis Eddy also earned his second victory in as many days in the Florida Modified division.

Lastly, Matt Jarrett was the victor in the first E-Mod feature of the World Series.