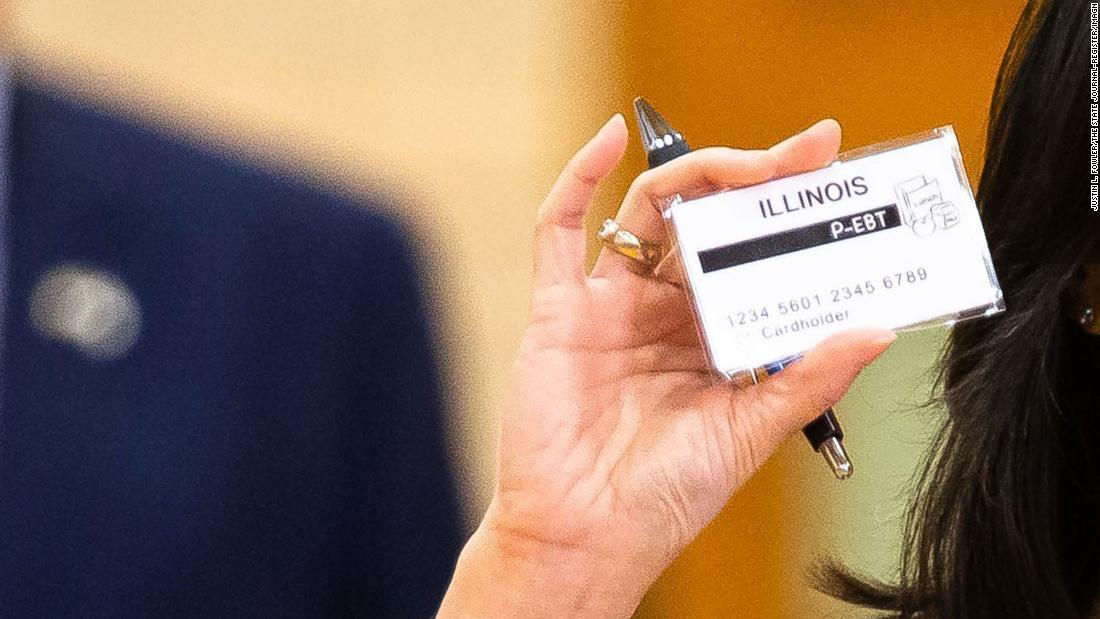 He’s still waiting, which has forced him to cut back on meat, buy more cold cuts, rice and pasta and pay for groceries with a credit card. The $840 he received in September for the meals his children missed when schools shuttered last spring has long since run out.

“It’s absurd,” said Francese, a New York City resident who is on disability. “The school year will be over before they start releasing the funds. It’s extremely difficult, and the price of food has skyrocketed.”

While all states provided this aid to parents after the outbreak shut down virtually every district last spring, many were slow to apply and be approved for this school year as administering the program has grown much more complex amid varying student schedules. When President Joe Biden took office on January 20, only six states and Puerto Rico had been approved by the US Department of Agriculture.

The Biden administration has made the program more generous and flexible, reached out to state officials to participate and worked to accelerate the approvals.

“The situation demands that we move as quickly as possible to get food in the hands of parents,” said Stacy Dean, USDA’s deputy undersecretary for food, nutrition, and consumer services. “Their kids are missing out on free and reduced price meals. We view this as an incredibly urgent matter.”

The agency is reviewing school and child care plans for another 18 states and territories.

In the 17 states that have yet to be approved, more than 9 million school-age children received roughly $3.5 billion from March 2020 through the end of the last school year, according to Marisa Kirk-Epstein, director of research, data and policy analysis at Share Our Strength, an anti-childhood hunger group. The funding is expected to be a lot larger for the current year.

What’s more, some parents say they have yet to see a dime, even in states that were already given the nod for this school year.

In New York, Francese will have to continue waiting. The state, which was approved on April 9 to send $2.2 billion to roughly 2.2 million children, will issue benefits for September through March in a single payment, likely in June, and then provide funds for the final three months of the school year from July through September, according to the USDA’s approval letter.

As part of a coronavirus rescue package in March 2020, Congress created the Pandemic-EBT program, which provides low-income families with money to replace the free or reduced-price meals their children would have received in school.

These benefits, which were distributed to more than half the school-age children in the US last year, amounted to between $250 and $450 per student, depending on how long his or her school was closed in the spring. Some 18 states also provided payments for the beginning of this school year since the program was funded through September 30.

States struggled, however, to identify the eligible children and to send the funds to them, particularly to families who don’t receive food stamps. Some states required families to apply for the benefit. It took weeks, and in many cases, months, for parents to receive the payments.

Congress then extended the program for this school year as part of a government funding bill last fall.

Lawmakers also expanded it to include children under age 6 whose families receive food stamps and whose child care facilities that have experienced pandemic-fueled closures or reductions. Young kids receiving food stamps are also eligible if their child care facility or their residence is near schools that are closed or operating at reduced capacity.

When Biden took office in January, he increased the benefit by 15% through an executive order. And the program was extended over the summer and for the duration of the public health crisis as part of the Democrats’ $1.9 trillion relief package that passed last month.

However, states still face enormous challenges setting up and administering the program for the 2020-21 school year, primarily because of the wide variety of students’ schedules. Some kids are in school most, if not nearly all, of the time. Others are on a hybrid plan. Still others are opting to be fully remote, even if their school is holding in-person classes.

And on top of all that, districts have been changing their operations as the coronavirus surges and wanes in their area.

Plus, identifying eligible younger children and matching them with child care or school closures has also proved difficult.

“Last year, basically every kid who was eligible for free or reduced-price school meals could get the benefit and get a set, fixed amount,” said Kirk-Epstein. “The more barriers you put in place for who is eligible, the harder it is going to be to get these benefits to kids who need them. That’s been the big change.”

Congress and the USDA have tried to simplify matters and provide flexibility for states, which are not required to calculate benefits based on each child’s schedule for the school year. States have devised a variety of ways to report students’ eligibility, though they need final approval from the agency.

Take California, which is still waiting for permission after submitting an initial plan covering both school-age children and those in child care on February 18 and a revised one on March 22. The Golden State provided almost $1.5 billion in benefits to nearly 4 million kids in the previous school year.

“California is currently working collaboratively with USDA to address additional questions and comments to obtain approval,” said Scott Murray, a spokesman for the state Department of Social Services.

Christina Martinez, however, is tired of waiting. Martinez, who is caring for her toddler daughter and three young grandchildren, received her last Pandemic-EBT payment of $199 in November, which covered the start of the school year for her oldest grandchild.

Once she get the funds for this year, she plans to use it to buy more nutritious food, including fruit and vegetables, which are more expensive but the kids love.

“I have four children under the age of 6 who eat me out of house and home,” said Martinez, a stay-at-home mom who lives in Hesperia, California. “I may not be able to get as much healthier food as I did with the P-EBT.”

Facebook
Twitter
Pinterest
WhatsApp
Previous articleHyundai reveals a new pickup truck, but please don’t call it that
Next articleReese’s wants to give you a peanut butter glow up