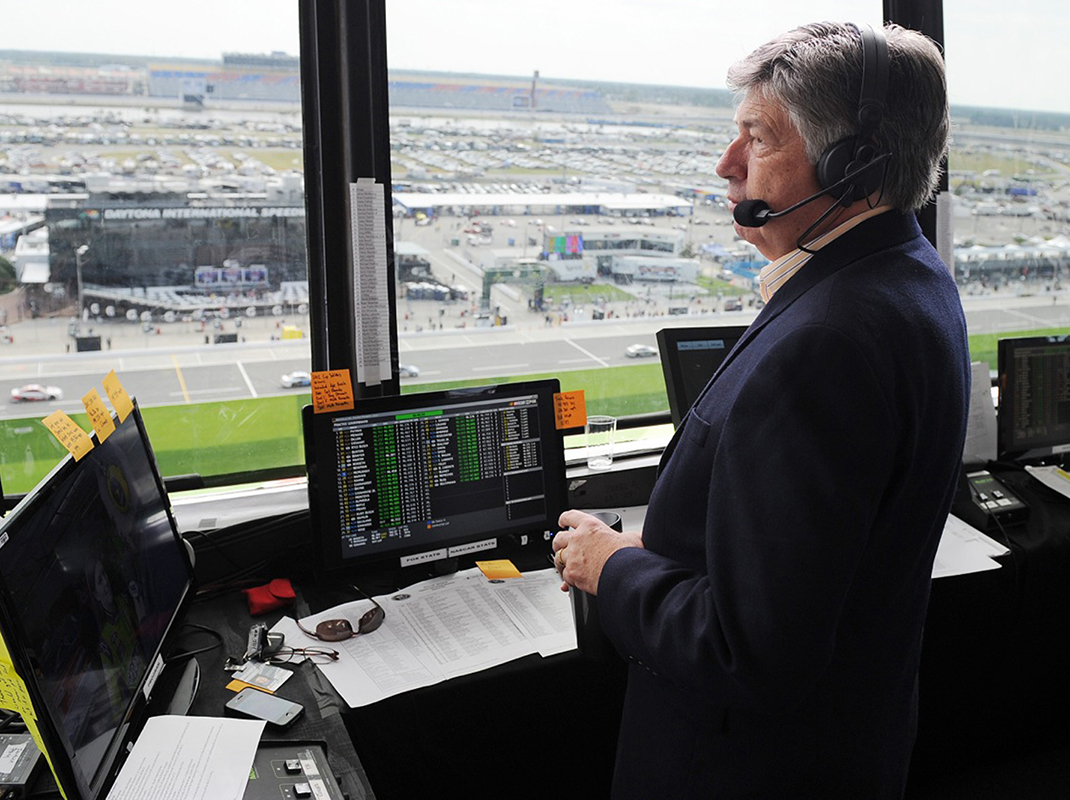 Mike Joy, a former New England short-track announcer who occasionally races a sports car at the age of 71, will once again anchor FOX’s television coverage of the Daytona 500.

Even though this will be the 21st time — three at CBS and 18 at FOX — that Joy has called The Great American Race, the broadcasting veteran claims he still gets butterflies on race morning.

“I use to get very little sleep the night before the Daytona 500,” Joy shared with SPEED SPORT. “I would always worry: Did I have enough stories to tell, did I know enough about each individual driver — we’ve got great historians and stats people, but can I bring enough to whatever is going to happen?

“The thing about time and experience is that it cures you of that,” Joy continued. “Now, I get a good night’s sleep before the 500, but driving into the facility those old butterflies are still there.”

Born in Chicago and raised in Windsor, Conn., Joy inherited his father’s passion for fast cars.

“My dad enjoyed sports cars and he had neat cars,” Joy recalled. “He had a two-seat roadster back in the ’60s. That was fun to ride in; just hard to get parts for. I always admired cars that handled much more so than cars that accelerated in a straight line.”

Joy was a 20-year-old student at the University of Hartford when a simple announcing opportunity formed the foundation for a broadcasting career that has lasted more than 50 years.

“We were autocrossing at Riverside Park Speedway in Massachusetts. We would put up cones around the quarter-mile and through the X in the infield and make an autocross course,” Joy explained. “I was in college at the time and they knew I was doing play-by-play for basketball and football and they said, ‘Hey, why don’t you go up on the PA system and tell people what’s going on,’ because people would wander in from the amusement park, sit down and watch the cars for a bit and then go ride the rides and stuff.

“So, I got up there doing public address and pretty soon we had a good crowd,” Joy added. “Joe Mahoney was the PR director for the park and they needed a back-up announcer for their Saturday night modifieds. Their track announcer, a fella named John Wallace Spencer, was an author as well and was often called away to do book tours. At first, I turned them down. I was interested in Trans-Am and Can-Am and not these jalopy-looking things with the old coupe bodies.

“Joe very wisely said, ‘Why don’t you come Saturday night and check it out.’ I did and they had about 8,000 people there watching racing on a quarter-mile oval. I’d see cars come off turn four, banging wheels and racing to the finish line just to win a consy by inches. And the crowd would go crazy. I said, ‘OK, I’ve got to be a part of this.’”

Joy soon became a regular behind the microphone at short tracks throughout the Northeast where he became friends with fellow announcers Ken Squier and Jack Arute III. Those relationships led to a variety of opportunities in radio with NASCAR’s Motor Racing Network, and eventually in television.

“Being at MRN and being right at the pulse of NASCAR, there were occasional opportunities to do television. When ESPN wanted to do their first live telecast, Bill France Jr. insisted on having one of his MRN people on that telecast and I was chosen to anchor it along with Larry Nuber,” Joy said. “Then, there were a couple of opportunities with TBS doing road racing. When I left MRN full time in 1983, that’s when CBS called.

“The CBS folks said, ‘We’ve had our eye on you for quite some time but we didn’t want to interfere with your full-time job at MRN.’ I joined CBS full time at Michigan in June 1983. That led to other things, doing NASCAR on TBS, doing the Charlotte races for Jefferson Pilot, and then when TNN started in 1991 they hired me as their anchor.”

Joy has anchored the NASCAR on FOX telecasts since February 2001 when the network ventured into NASCAR Cup Series racing.

Away from the track, Joy spends as much time with his wife and two college-aged children as possible.

“We try to do family trips and sometimes they are combined with racing,” he said. “Car week in Monterey is really big for us. In addition, I’ve always got a couple of car restoration projects half finished.”

As for his future in the TV booth: “I’m committed to finishing out the current FOX contract through 2024. After that, I hope there is an opportunity for me,” Joy noted. “It might not be the play-by-play position, but the years that I have spent in the sport and the things that I remember about the people who have been in the sport and some of the great races that we’ve had, hopefully, there is an opportunity to give voice to that.”