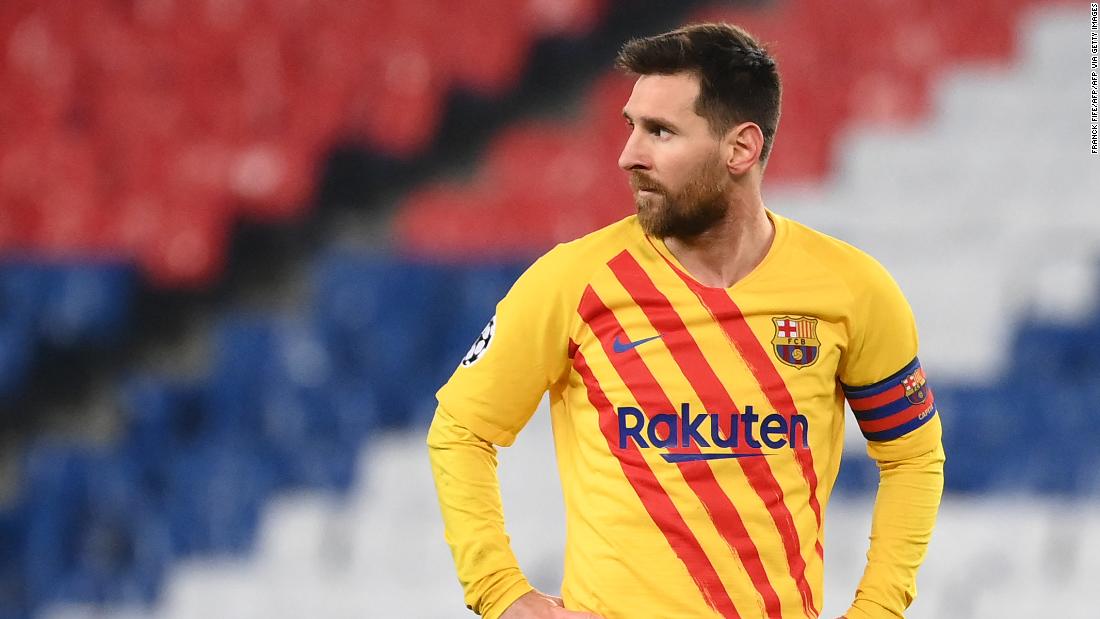 Needing to score at least four goals to overcome a disastrous 4-1 first-leg result, Barcelona’s task was made almost impossible after Kylian Mbappe converted a penalty for PSG on the half-hour.

In the past, when it needed a miracle, Messi has often worked his magic and the captain started to cast his spell at the Parc des Princes.

The Argentine picked the ball up in the middle of the pitch drove at the PSG defense. As good as Messi is, there didn’t seem to be a great deal of danger but the magician then shifted the ball onto his left foot.

Seemingly out of nowhere, he unleashed a ferocious effort from 25-yards that rocketed into the top corner of the net. Blink and you would have missed it.

Messi has scored plenty of goals in his career — this effort was his 120th goal in the Champions League — but he hasn’t scored many better than that.

“He’s been sensational in the first half, but this goal from Messi is something special,” tweeted former Barcelona player Gary Lineker.

PSG could have been forgiven for wondering if they were about to experience part two of La Remontada — “The Comeback” — in 2017 when the French side were beaten 6-1 by Barca having won the first leg 4-0 in the Champions League quarterfinals.

However, Messi then managed to drop his wand when he missed a first-half penalty which perhaps would have given his side some hope of recreating that remarkable 2017 comeback.

Instead, the match ended 1-1 and PSG boss Mauricio Pochettino was glad his side survived what could have been an embarrassing repeat performance.

“We suffered a lot in the first half, and psychologically it was a test for us. I gathered that the past was something that was talked about a lot here,” he told reporters after the game. “We were better in the second half, we were more competitive.”

Despite the disappointment, Koeman hopes Barca’s performance will be enough to convince Messi to stay at his childhood club past this season.

The 33-year-old’s deal runs out at the end of the season, and he is currently free to enter into negotiations with other clubs over a potential move in the summer.

Messi made public his desire to leave last summer, and it has been looking increasingly unlikely he will sign a new contract.

“Leo [Messi] has seen for quite some time that the team is improving thanks to all the changes we’ve made,” Koeman said after the defeat.

“We have young players of great quality. We’ve got a great future ahead. Leo can’t have any doubts about what the future holds for this team.

“We are departing this Champions League in a very different manner from the way we did last season. In this game, we hit our level and that’s the road we have to follow.”

End of an era?

This is the first time in 14 years that Barcelona has not reached Champions League quarterfinals.

It’s also the first time since 2005 that both Messi and Cristiano Ronaldo will not feature in the quarterfinal stage of the tournament, after Juventus was dumped out by Porto on Tuesday.

It’s yet another signal that there is a seeming changing of the guard in European soccer with the Ronaldo and Messi era coming to an end.

In their place, it looks like PSG’s Mbappe and Dortmund’s Erling Braut Haaland are beginning to ignite a similar rivalry.

Haaland broke a plethora of scoring records with his brace against Sevilla on Tuesday before Mbappe replied by becoming the youngest player in Champions League history to reach 25 goals in the competition.

With both Dortmund and PSG both in the hat for the quarterfinal draw on March 19, neutral fans will be hoping for a mouthwatering fixture that pits two of Europe’s most exciting talents against each other.