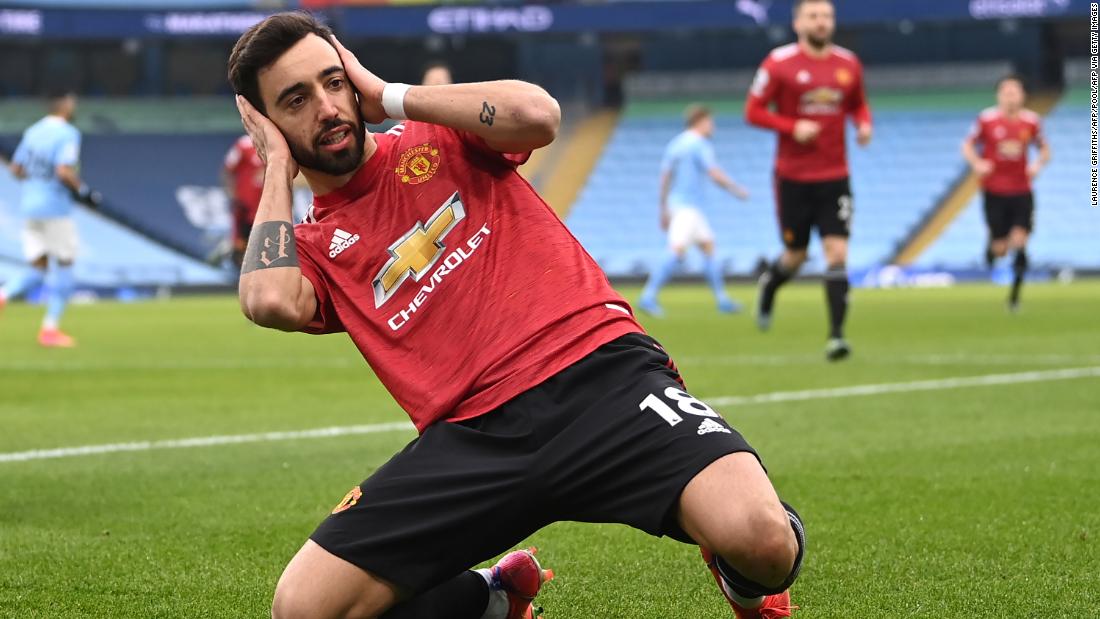 A Bruno Fernandes goal and a rare strike from defender Luke Shaw were enough to hand Ole Gunnar Solskjaer’s side a confidence boosting win in the derby.

Coming into the Premier League match, City hadn’t lost in all competitions since November 21 and was facing a Untied side short of form based on recent performances.

However, it took the visitors just 101 seconds to take the lead through Fernandes’ spot-kick, the talisman’s 16th league goal of the season. And United was deserving of all three points.

Despite the defeat, City remains 11 points clear at the top of table, but the result will do wonders for United’s hopes of securing second place.

“We lost and that will be the news, but the [real] news is 21 victories in a row. This is the news,” Pep Guardiola told Sky Sports after the match. “This result is going to help us a lot to understand how difficult it is.”

“There is still a lot of games to play […] we have to start winning again and next game we have an opportunity to do it,” Guardiola said.

‘The league is not a sprint’

City hadn’t trailed in the Premier League for 20 matches, so no one could have expected United’s perfect start.

The hosts could have no complaints with the penalty decision either, with Anthony Martial being clumsily tripped by Gabriel Jesus.

Fernandes stepped up to squeeze his penalty past City keeper Ederson, who might have done better to keep it out after getting a strong hand behind the effort.

The poor start seemed to rattle City as United’s forwards swarmed together to press high up the pitch.

Luke Shaw could have easily doubled his side’s lead moments later but he dragged his shot straight at Ederson after the ball broke for him in the box.

After surviving the early scare with just one goal conceded, City began to settle as the match fell into the expected pattern.

Guardiola’s side started dominating possession with United sitting back and trying to catch its fierce rivals on the break, a plan that worked for Solskjaer shortly after the break.

Dean Henderson, filling in for regular starting goalkeeper David de Gea, launched a pinpoint throw to Shaw, who strode to the edge of City’s box. A quick one-two with Marcus Rashford gave the English full-back space to double United’s lead.

The second goal seemed to knock the stuffing out of City as Untied began to dominate. Martial should have made it 3-0 after the Frenchman fluffed a simple one-on-one against Ederson.

United, which has now gone 22 away league games unbeaten, managed to hold on to its clean sheet despite a late spell of intense pressure.

“The league is not a sprint because if it was a sprint, we [would have lost] straight away in the beginning of the season because we lost two games,” Fernandes told Sky Sports after the match.

“It’s a marathon. There is a lot of games to go ahead now. We have to do our best, and don’t think about others, think just about us and winning our games.”

READ: Diego Maradona’s Porsche is up for sale

Elsewhere in the Premier League, Liverpool fell to a sixth consecutive home defeat at Anfield at the hands of Fulham.

The reigning champion looked bereft of confidence as its relegation-threatened opponents held on to a deserved 1-0 win.

Jurgen Klopp had made seven changes to the starting line-up in an effort to freshen up the squad, but he witnessed the same problems that have plagued his side since the turn of the year.

The goal came from another lapse in concentration as Mario Lemina picked the pocket of a sluggish Mohamed Salah on the edge of Liverpool’s box before firing his shot into the corner of the net.

The toothless hosts, which remain seventh in the table, couldn’t recover and yet again looked disjointed and blunt in attack.

“We never had a momentum in the season, really, in the Premier League at least. You can see that,” Klopp told Sky Sports after the match.

“It’s still in the boys, they still have it all, but in the moment can’t show it,” Klopp said. “It would be a masterpiece to find out how we change that overnight.”