King of the Baggers: A slice of pure American folklore goes racing 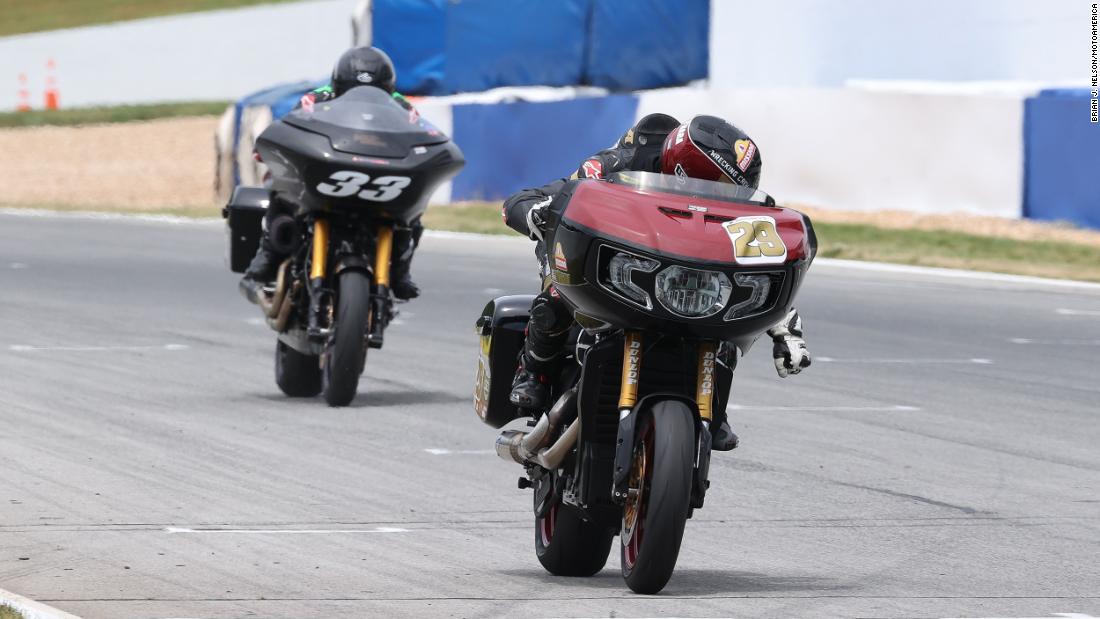 A Bagger is a slice of pure American folklore; a big, heavy motorcycle designed to lazily gorge on the Big Country’s interstates or cruise along its scenic highways.

Comfy seats, cossetting fairings, rumbling V-twin engines and, crucially, bags strapped to the sides; if you’ve ever dreamed of gliding along Route 66, it was likely either in an open topped Mustang or in the saddle of a Bagger.

The King of the Baggers takes these cruisers, strips them back and soups them up a little. Then it places them together on some of America’s most famous tracks as part of the MotoAmerica professional race circuit. The result is a series that is garnering plenty of attention.

Frankie Garcia embodies the King of the Baggers spirit. Emerging from a golf cart in the paddock at MotoAmerica’s Road Atlanta meeting, the 29-year-old Californian cuts an improbable figure for a competitive racer.

“When you think of a person that would ride a Bagger, you’re thinking of some guy who’s got a beer belly and tattoos and, like, drinks beer and eats cheeseburgers, and I like that!” he tells CNN from inside his team’s trailer.

“You know, I’m not entirely an athlete by any means,” he continues, tapping a not insubstantial waist and gesturing out towards the paddock, “and you know, some of these guys I race with are.”

One of those athletes is fellow Californian Tyler O’Hara, whose team is camped opposite Garcia’s. Both men ride similarly modified Indian Challengers — 800lb cruisers closely related to their showroom cousins; but the lean, toned O’Hara has a 16-year professional career that includes wins in some of America’s most prestigious domestic race series.

O’Hara piloted his Indian to victory in the inaugural King of the Baggers race at the Laguna Seca raceway in October 2020. The racer’s face lights up when asked why he has joined the series.

“This is special, I mean there’s nothing quite like it,” he explains. “It’s unique and it’s fun, we’re riding bikes that people can go to a showroom and go buy, and go to S&S [an American motorcycle engine and parts engineer and manufacturer] and buy the race kit, and come out and race the same things that we’re racing.”

Garcia had a budding track career of his own but found it hard to make ends meet on the circuit.

“I just decided to get a regular job and rode and raced in between as much as I could,” explains Garcia, who works as a maintenance technician at a power plant.

“Monday through Friday, 7 a.m. to 3:30 p.m., I’m slaving away,” he tells CNN. “I’ve got a toolbox and we’re putting stuff together and working on turbine engines and generators and pumps and you name it […] I try to ride motorcycles as much as possible on my free time off.”

Bagger racing can, Garcia admits, be daunting. “It’s intimidating. It really is. I mean sport bikes are light, nimble machines.” he explains.

“With these baggers […] if you get into a situation, especially around someone else, or you know, someone crashes in front of you, or someone makes a mistake in front of you, things could go wrong just because you can’t […] these things aren’t nimble, they’re big heavy motorcycles.”

Garcia has nicknamed his Indian, “The Carbon Clydesdale.”

“She’s a big, big, machine, wrapped in carbon bodywork and lightened up a little bit, but she’s still a big girl!” he adds.

Between O’Hara and Garcia’s teams, a group of flannel-clad mechanics circle another bike, tinkering with its engine and happily chatting to curious spectators. Among them is rider Eric Stahl, another Californian part-time racer.

“So, we’re very fortunate to be out here,” said Stahl, beaming as he describes his team’s set-up.

“We did a 37-hour trip straight through and got to race Road Atlanta. We’ve never been here before, and we’re just looking forward to having a good time and trying to go up against these factory teams.”

Stahl’s bike is a Harley Davidson Electra Glide, a classic old-school Bagger, stripped back to its bones. It even has a seat clad in duct tape.

“90% of the products on this machine you can actually go to the sponsors that I have, on their websites, and purchase them and put them on your motorcycle at home, so there’s nothing here that special that we’re racing, they’re just highly modified.”

A little further along the paddock, however, is a very different operation, the Screamin’ Eagle Performance Harley Davidson factory team.

Word in the paddock is that the venerable manufacturer was unhappy at its second place in the inaugural race, and this outfit is the result: a full factory supported team, with the race-proven talent of current MotoAmerica superbike racer Kyle Wyman in the saddle.

Harley versus Indian is one of America’s oldest rivalries. Indian was founded in 1901 and Harley followed in 1903, but the older brand struggled after World War II and shut down in 1953. Revived in 2011, the smaller upstart has taken great delight in thumbing its nose at its bigger rival at the King of the Baggers.

Harley, for its part, takes equal pleasure in reminding people that it has been around for 120 consecutive years.

Harley Davidson’s Chairman and CEO, Jochen Zeitz, was in the paddock at Road Atlanta, underlining how seriously the Milwaukee giant is now taking the King of the Baggers.

The company is even offering a cash contingency program, in the region of $30,000, for qualified Harley racers competing in the series.

“Harley Davidson supports motorcycling, whenever and wherever, any type of person that wants to be involved in motorcycling,” Screamin’ Eagle team manager Jason Kehl tells CNN.

“We can’t have a Bagger race without Screamin’ Eagle Performance from Harley Davidson here out fighting as well.”

Zeitz declined to speak to CNN at the track.

Definitely not ‘the norm’

King of the Baggers is now part of MotoAmerica, the highly competitive series that feeds into MotoGP.

Its president, legendary three-time world champion Wayne Rainey, admits he was unsure about letting the Baggers join the fray. “Obviously, I’m a bit of a purist when it comes to motorcycle racing and this was definitely not the norm,” he tells CNN.

“But it really turned out to be one of those ‘you can’t tell a book by its cover’ deals. Part of me was concerned that the Baggers would be slow and wouldn’t look right, but that turned out to not be true and that was evident after just a few laps of practice.”

Rainey is hopeful the Baggers could be a gateway to the wider MotoAmerica series.

“I think the amount of interest in the King of the Baggers has and will continue to bring more people to the racetrack. For some it’s the oddity of the class and for others it’s a case of them owning a Bagger and wanting to see them go around a racetrack really fast with talented riders on them,” he continues.

‘It just blew up’

“We know that our first race drew a lot of interest to our series,” Rainey says. “Even though fans weren’t permitted at the debut due to the pandemic. Our TV numbers, social media, highlight videos […] anything we did with the Baggers class just blew up for us. We had huge numbers and it really got the ball rolling.”

When the Baggers finally took to the track in Atlanta, the race did not disappoint. After a disastrous start from pole, O’Hara managed to pass teammate Garcia and catch Wyman, whose Harley had taken an early lead.

The two gigantic bikes duel for eight laps, with O’Hara finally edging his Indian ahead of Wyman, and Garcia holding on to third. At the podium ceremony there were beaming smiles all around.

Kehl is philosophical, saying: “We didn’t get Harley-Davidson on the top step of the podium, but as a fan and as someone who just loves motorcycling, there’s nothing better than to have a race out here today and two top competitors, Tyler O’Hara and Kyle Wyman, out there battling out on two awesome motorcycles.”

Back to the day job

Perhaps the happiest man at Road Atlanta was Garcia.

“I knew it was going to be hard coming to a brand new track, somewhere I’ve never been, riding with a bunch of guys that have been here a ton of times, and you know to be able to put it on the podium is just awesome,” he tells CNN.

There would be no time for the Californian to celebrate, however.

“I gotta go pack my bag and head out to the airport,” he says. “I gotta go to work tomorrow, so I gotta get home. I land at midnight, I gotta be at work at seven and, you know, we’ll keep on trucking till the next one!”