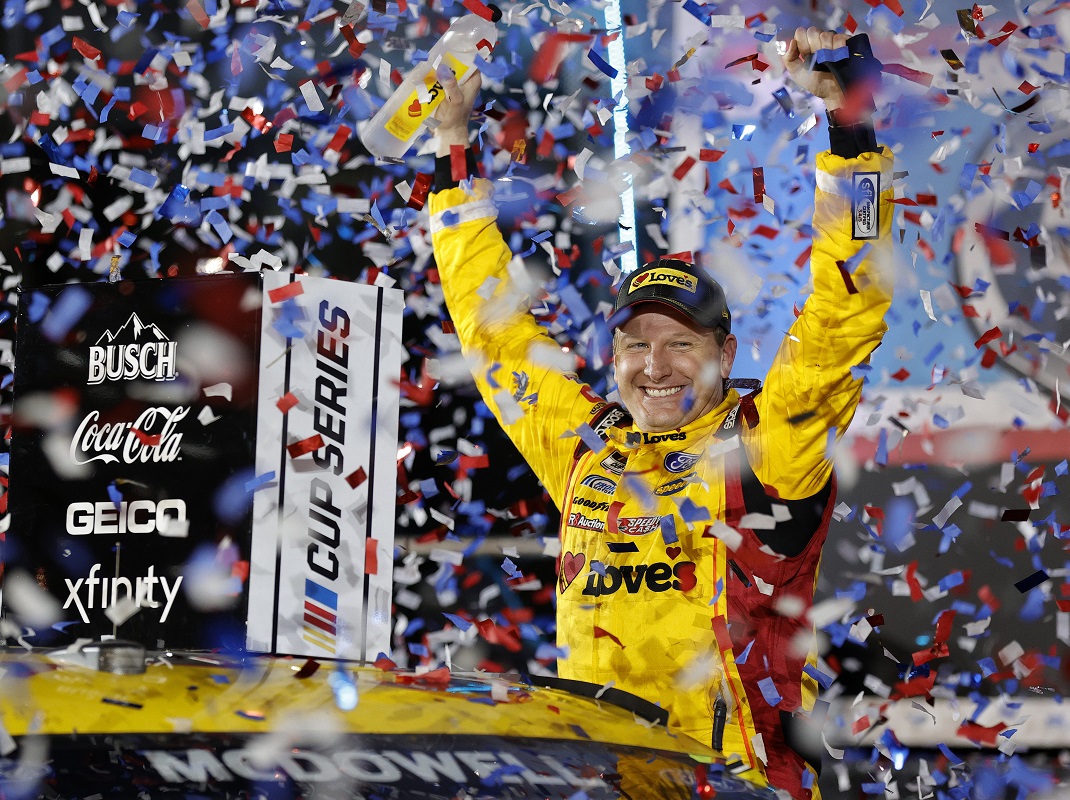 DAYTONA BEACH, Fla. – Michael McDowell worked his way past a fiery crash in turn three coming to the checkered flag to earn one of the biggest upsets in Daytona 500 history early Monday morning.

Kicking off his 14th season in the NASCAR Cup Series, McDowell was running third on the final lap of the 63rd Daytona 500, after pushing Brad Keselowski to the runner-up position as the white flag waved.

He and Keselowski lagged back to get a run coming down the backstretch, which they took into turn three as Keselowski looked low on Logano to challenge for the Harley J. Earl Trophy.

Pushed by McDowell, Keselowski ultimately tagged Logano into a spin in the turn-three banking, with many cars from the lead pack piling in as Keselowski’s Ford was impacted in the rear and a fireball erupted around the accident scene.

Meanwhile, Chase Elliott and Austin Dillon took McDowell three-wide in turn four coming back to the tri-oval, trying to steal the win for themselves before the caution lights illuminated to freeze the field.

After several tense minutes while NASCAR reviewed the scoring at the moment of caution, McDowell was declared the winner – marking his first Cup Series win in his 358th start at NASCAR’s top level.

McDowell led only lap 200 en route to the victory, the third time in the last five years that the Daytona 500 champion won the race by leading only the final lap.

“I just can’t believe this,” said a breathless McDowell in victory lane. “I’ve just got to thank God. I’ve spent so many years just grinding it out and hoping for an opportunity like this. Bob Jenkins gave me this opportunity and I’m just so thankful. This is such a great way to get a first victory – in the Daytona 500. … We had our Ford partners at the end and they all crashed, but luckily I was able to make it through. I’m just so thankful. God is good.

“We won the Daytona 500! Are you kidding me?! Unbelievable!”

The run to the finish was set up a game-changing set of green-flag pit stops inside of 40 to go, when the Ford teams kicked off the final round of service with 30 to go and stayed organized exiting pit road.

While the Blue Ovals and the Bowtie Brigade had relatively smooth pit sequences, the Toyota quartet was disorganized leaving pit road and got swallowed up by the lead pack as they came back up to speed.

That created a single-file train of cars around the outside of the 2.5-mile superspeedway for much of the last 25 laps, with Logano leading Kevin Harvick, Cole Custer, Keselowski and McDowell down the stretch.

Custer and the Chevrolet of Ryan Preece tried to make a run to the low side coming to nine to go, but got shuffled out of the order, leaving four Fords out front in the battle for Daytona 500 glory.

Harvick tried to lag back inside of four to go to get a push from Keselowski, but it took until lap 199 – when Keselowski drug the brake to build a run with McDowell – that the complexion of the race fully shifted.

Keselowski and McDowell leapt to second and third, respectively, at the white flag, setting up behind the leading Ford of Logano to try and make a similar move for the victory going into the third turn.

They did just that going down the backstretch, building momentum and jumping to the bottom entering the banking as Logano moved down to try and block Keselowski.

That shift led to contact between the nose of Keselowski’s car and the rear of Logano’s car, sending both Logano and Keselowski around in front of the field as McDowell dove low and raced toward the finish line, with the caution flag coming moments later to clinch his victory.

Elliott was scored as the runner-up, followed by Dillon, Kevin Harvick and Hamlin, who led six times for a race-high 98 laps in his pursuit of a third-straight Daytona 500 win.

Though Elliott, the defending Cup Series champion, knew he had a chance going into the final corner, he simply ran out of time when the yellow was called.

“I think it was close,” Elliott said. “I kind of got next to him, then I saw the lights came on and I knew it was over right then. We had a fast car. We weren’t as good as I thought we were on Thursday (in the Duel qualifying race), but I thought we did a really good job of executing and staying out of trouble.

“(Executing) is not something I’ve done a very good job of here in this race, so I’m glad we could at least finish this race and have something to build on for when we come back and try to do better,” Elliott added. At the end there, the top was just so fast. It didn’t seem to matter who went low; you just couldn’t do anything.”

Hamlin swept both stages under the lights, after a near six-hour rain delay stalled the proceedings with just 15 laps completed. Just before that, a 16-car crash erupted in turn three on the 14th lap of the race.

To view complete race results, advance to the next page.

CRANDALL, Texas — The top dirt modified racers in the country will kick off the new season for the Summit USMTS National Championship...
Read more
Motorsport

Richard Mille is delighted to announce its new partnership with one of the world’s most iconic brands – Ferrari. Founded in 1947 by...
Read more
Motorsport

Although the team is carrying over the RP20 chassis from last year, which helped it to fourth place in the constructors’ championship,...
Read more
Load more