Is Thailand’s Full Moon Party over for good? 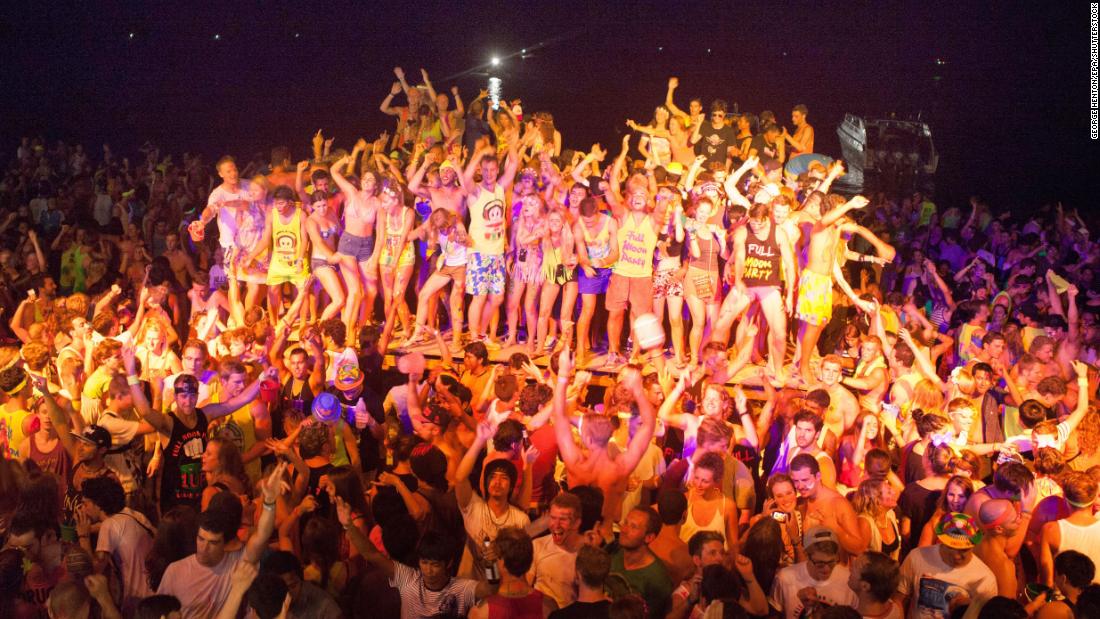 The deserted streets of this small town are a study in neglect, an impression brought cruelly into focus by the ongoing global pandemic.

Shabby shops offering cheap Thai massages or advertising bamboo tattoos are shuttered, their doors fastened by heavy chains. The only things missing from the eerie scene are giant balls of tumbleweed: not a possibility in this verdant tropical paradise.

On a typical full moon night before the pandemic, the bars that line Haad Rin beach on this Thai island would already be packed with partygoers soaking up the sunset in anticipation of a long night of block-rocking beats and potent cocktails served in buckets.

But though quarantine restrictions are keeping most international travelers away from Thailand these days, there’s some life at Tommy Resort, a Haad Rin stalwart that has been hosting backpackers since 1980. At a large table in the main bar area, a group of local men are pouring whisky, clinking glasses in honor of global vaccination efforts and anticipating the imminent return of the Thai island’s main claim to fame.

“We are hopeful that the Full Moon Party can resume this summer,” says one.

The men — all owners of tourism-dependent businesses such as hotel, bars, restaurants and tour operators — have a strong vested interest in a successful resurrection of Thailand’s most famous shindig.

They are members of the Haad Rin Business Association, the current custodians of an event that has evolved from its roots in the 1980s as a humble hippy beach gathering to a phenomenon that, pre-pandemic, regularly drew crowds of up to 30,000 people to the powder-soft sands each month.

The growth of the Full Moon Party has not been without issues. Its core creed of harmless fun played out in tropical paradise surroundings remains intact.

Nevertheless, bad press has attached itself to the event. Critics have highlighted real and perceived dangers from drugs, alcohol abuse and opportunistic crime as well as bad behavior on the part of revelers.

With the pandemic sweeping the globe, local authorities in Surat Thani province, which governs the island, ordered the parties to stop in March 2020. The year-plus pause that has followed has prompted much in the way of soul-searching and speculation.

Some on the island are advocating for a more sustainable, better regulated and calmer event with the potential for less negative associations. Others are reported to be in favor of killing off the cash cow permanently and paving the way for other kinds of tourism in Haad Rin.

Many of the shops, bars and restaurants that line the streets of Haad Rin have been forced to close.

But judging by the attitude of the whisky-supping powerbrokers, it seems that rumors of the imminent death of the Full Moon Party are premature. The party attracts more than half of the more than one million visitors that come to Koh Phangan each year.

It supports thousands of jobs and small businesses. Given the economic boost such a reliable influx of visitors provides, it’s no wonder that many are desperate to see a return to business as usual.

“It (the pause) has been a terrible blow for many people on Koh Phangan,” says P Noi, the owner of Tommy Resort.

“The last event before the pandemic in February, we had 20,000 people at the party. The absence of customers has had a knock-on effect on everyone from business owners to food sellers, migrant workers and taxi drivers. We accept constructive criticism, but there’s no reason why the Full Moon Party cannot come back when tourism opens up again.”

The group mention several areas in which they would like to evolve. They accept the need for mask-wearing and social distancing: at least until the pandemic is firmly in the rear-view mirror. They also hope to attract a wider diversity of higher-quality businesses to Haad Rin to replace the massage and tattoo parlors and tacky souvenir shops, many of which are closed permanently.

A man sleeps on the beach just before sunrise at the Full Moon Party on Haad Rin beach in 2013.

Observers such as celebrated UK DJ Graham Gold — a long-term resident on Koh Phangan — would like to see a more drastic overhaul of the Full Moon Party itself. The Londoner, however, has the first-hand experience of a widely held reluctance to fix what many feel is unbroken.

“Some years ago, I worked with a guy called Aaron Fevah (another Koh Phangan-based UK DJ) for three months researching everything about the Full Moon Party,” says Gold.

“We looked at how it could be improved and made safer with proper security and production and sound systems equal to festivals around the world like Tomorrowland and Creamfields. We presented the Haad Rin Business Association with a 35-page document on how to turn it into a world-class event. But such a plan needs serious investment.

“The Full Moon Party grew pretty much organically from its origins as a hippy beach hoedown with guitars and a couple of bonfires and many locals got very rich without any real investment. So why start now? They believe — and probably rightly so — that people will always come to Koh Phangan for the party.”

“There’s far more to Koh Phangan than the party”

While a “same, same, but just slightly different” attitude appears to prevail (for now at least) in Haad Rin, Koh Phangan as a whole has witnessed a more nuanced evolution in recent times.

The party has, in the past, tended to define the entire island, with many regarding it as a feral wild child, especially in comparison with more polished Thai tourist destinations like Phuket or Koh Samui.

A blissed-out counter-culture-friendly vibe remains. But the island has broadened its appeal beyond backpackers to attract high net worth holidaymakers, families, yogis attracted by a vibrant wellness community centered on the village of Sri Thanu, digital entrepreneurs and Bangkokians seeking refuge from city life.

“The image of the island presented by the Full Moon Party is potent,” admits island-based author and writing coach Brian Gruber, one of the administrators of the Koh Phangan Conscious Community Facebook page, an online hub for island-relevant events, information and discussion with over 50,000 active members.

Koh Phangan’s Full Moon Parties have been taking place since the 1980s.

“But I think that the message that there’s far more to Koh Phangan than the party has been filtering through for a while.”

The economic pain caused by the pandemic has, of course, been acute for many people. But in some ways, Koh Phangan appears to be not just surviving but thriving.

The island’s reputation for hosting a killer party, meanwhile, reaches far beyond Haad Rin. Popular draws such as Eden, Guy’s Bar and Lost Paradise keep revelers — a mix of domestic travelers and island residents — moving from dusk until far beyond dawn.

On the advocacy side of things, Forward Phangan — a collective of volunteers representing residents, local businesses and organizations — are working towards the common goal of improving the island for residents and visitors alike. Unsurprisingly, the Full Moon Party has been a major topic of conversation recently.

For Forward Phangan member Jakkra Brande, the key to a sustainable future for the Full Moon Party — and indeed for Koh Phangan — rests, not in wholesale changes and rebranding, but an appreciation of what makes the island special.

Brande, a Bangkokian who owns Nira’s Bakery in Thong Sala, the island’s main port, arrived on Koh Phangan as a 7-year-old in 1984. Even now, he recalls being overwhelmed by the island’s natural splendor and the warm welcome from the locals.

Exhausted partiers sleep on a ferry leaving Koh Phangan in 2013.

“Changing ourselves into something we are not is wrong,” he says.

“We need to improve what we already have here. Of course, Haad Rin can be made more appealing. What’s more important is learning to appreciate what we have — the pristine environment, the friendliness — and work on preserving these aspects before our charm disappears.”

Back in Haad Rin, the sun has drained from the day, but the gathering is still ongoing. The men raise their glasses in another toast: this one dedicated to absent friends that they hope to see again soon.

“People have tried to recreate the Full Moon Party elsewhere, but nobody can do it,” smiles P Noi. “So, we can’t wait to see people returning to the best beach party in the world.”

This vacation hotspot is offering vaccinations to visitors

(CNN) — It was one of the first countries to fully reopen to travelers, and now Maldives is striving to be ahead of...
Read more
Travel

The postcard that came home after 60 years

(CNN) — It was 2003, and Leora Krygier was rummaging around a thrift store near her home in Los Angeles.Krygier wasn't looking for...
Read more
Travel

They met at an airport and fell in love