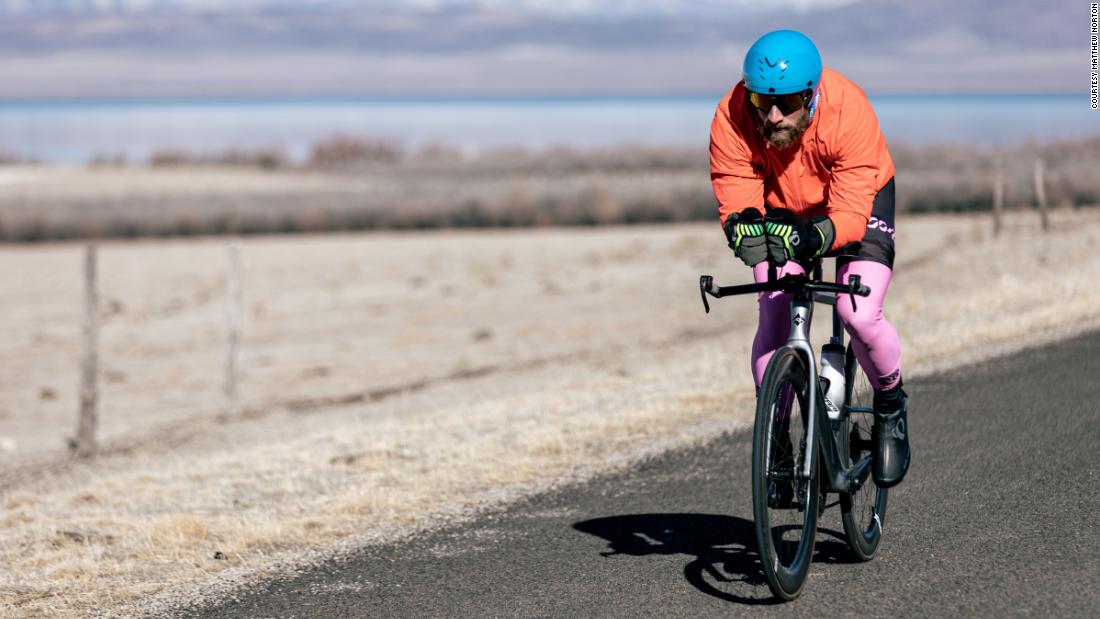 Lawrence, known to many as the “Iron Cowboy” is doing those thousands of miles near his home in Lindon City, Utah. He started on March 1 and hopes to complete the feat on June 8.

“People always say chase your dreams, but when you’re chasing something, you never catch it,” says Lawrence’s wife Sunny, explaining the reasoning behind the title “Conquer 100.”

“With this, I was like, it’s got to be something powerful, you own it, you are the master and you’re conquering it.”

By completing the ‘Conquer 100,’ Lawrence wants to set a new benchmark of human performance and endurance.

“I do what I do to raise money for charity and to challenge myself to see what the limits are for my mind and body,” says Lawrence, who celebrated his 45th birthday alongside a 38th successive daily triathlon on April 7.

“My first endurance challenge was a four-mile fun run on Thanksgiving Day,” he recalls. “At least it felt like an endurance event when I did it in 2004.”

“James was a gym rat,” says Sunny. “He’d just go to the gym and lift weights. I had run for fitness and said, you know, let’s do this race.

“It was difficult for him and I was like, you have got to be kidding me. How can that be hard for you?

“I had always wanted to run a marathon and signed us up, but I would have never known that that four-mile fun run would have turned into this entire career.”

After their marathon together James Lawrence discovered triathlon.

“It was one small step at a time,” he explains. “Over a decade I took it up a notch, stayed consistent, and climbed the ladder to extreme endurance.

“I have always enjoyed individual sports having grown up a wrestler, and then taking on golf. Triathlon was a natural transition for me as far as challenging the mind and the body.”

Lawrence is reported to have completed the most half-distance triathlons in a year, 2011, before moving on to break records in the full-distance discipline in 2012.

“It definitely was a logistical nightmare,’ recalls Lawrence. “An experience we will forever remember.”

Traveling throughout the US in 2015 — as the Amazon documentary “Iron Cowboy: The Story of the 50.50.50 Triathlon” details — equipment went missing, shoes got lost, and the Lawrence family, including all five children, lived and slept in a rented RV.

“That naivety,” says Sunny. “Not knowing how hard it was going to be, was probably the greatest gift we’ve ever been given. We might’ve chickened out, but we were like, oh, no, we totally got this.

“When you’re in it and it’s miserable, you’re like, well, we got to see it through.”

Family is important to Lawrence and his eldest daughter Lucy — now full-time student and business manager — would meet her father to run the final 5km each day.

“Nothing great is ever accomplished on our own,” Lawrence says. “And I have been so blessed to go through this journey with my family. They are everything.”

READ: He was convicted for a crime he didn’t commit; now he’s selling art to the Obamas

Logistics were not the only difficulties Lawrence faced. On day six of the 50, he tore a shoulder muscle and had to swim the next 44 days with one arm, while another day — due to sleep deprivation — he fell asleep while cycling, tumbling onto the road.

By day eight he was suffering from such severe dehydration that he passed out, and was subsequently administered with an intravenous drip (IV) of saline solution to recover.

The injuries and a tropical storm forced the “Iron Cowboy” and team to arrange indoor facilities in a number of states to enable him to complete the required daily distances on static equipment such as a cross trainer, an elliptical machine that replicates the motion of running without the impact.

That meant Guinness would not ratify the 50.50.50 for the world record; Lawrence’s use of an IV also led to hostility and accusations of cheating on social media.

The World Anti-Doping Agency (WADA), did not immediately respond to CNN’s request for comment, but according to the Amazon documentary, IV use within two weeks of a triathlon event was regarded as doping, and subsequently WADA changed their rules to appreciate extreme endurance challenges such as the “50.50.50.”

However, Lawrence has admitted using an elliptical machine did reduce the credibility of his achievement.

Further controversy ensued when Lawrence didn’t provide a direct link for people to donate money to the charity he supported throughout the challenge — the Jamie Oliver Food Foundation, which aimed to alleviate childhood obesity — and he was accused of charity fraud.

The now defunct foundation denied this was the case, eventually making a link available, and Lawrence tells CNN that the eventual fundraising figure reached $80,000.

READ: Trekking 4,000km along the Australian coast — on a skateboard

After what he’d put his body through, Lawrence knew when he committed to the “Conquer 100” in the fall of 2020, his preparation had to change.

With health testing at UCLA, and medical data being monitored daily through Biostrap, his team acknowledged that he needed to use “every option he can to recover,” including body massages every night, magnetic pads, red light therapy, a hyperbaric chamber, and rapid reboot compression boots.

Lawrence is also sleeping far more — an average of seven hours a night. His diet includes fruit, sandwiches, Hi-Chews, Swedish fish, salads, green smoothies with protein powders, and “as many potatoes as I can” he says.

His weight — for someone completing such a huge amount of intense exercise — has stayed remarkably consistent according to his team.

Your own version of hard

Lawrence knew it was impossible to train a human body for 100 full distance triathlons, and says he used a gradual process of low impact, “heavy” bike, “low run volume” and consistent swim and weight training so that the first 10 triathlons would prime him for the next 10 and so on.

He explains that he wanted to feel fresh at the start as “10% undertrained is better than 1% overtrained.”

The plan worked and just like during the “50.50.50,” Lawrence says he felt his body “break” after three weeks, and then bounce back.

“It was incredible to see my body change and act as if it had a mind of its own,” says Lawrence.

Being close to home in Utah, domestic familiarity and local support has helped banish memories of the toxic response he suffered online over the “50.50.50.”

Sunny emphasizes, the threat has been “non-existent.”

“Not one person. I don’t know if it’s because people know he can do it, or because of the cause,” she says. “This time around nothing, it’s such a beautiful thing.”

“The community loves it,” admits Lawrence. “Particularly our hometown, Lindon City. They have bent over backwards for us.

“Everyone is engaged and supportive, it has been an incredible experience.”

READ: How Michael Miraglia completed his own Strongman Marathon on Utah’s Bonneville Salt Flats
A glance at his social media also shows lot of interaction with his endeavor — from children to housewives, and athletes to action figures.

“I love to empower people to do their own version of hard,” he says. “It is kind of fun to do the impossible.”

Lawrence says he met his fundraising target of $100,000 by day 38, and now past the halfway mark in his ‘Conquer 100’ attempt, the Iron Cowboy is again in record breaking territory.

“I mentally feel great,” he confirms. “I’m stronger than I was for the 50 … there is a lot of work to be done, and I am respecting the journey.”

"Raleigh Police Department detectives, working in conjunction with the Wake County Sheriff's Office, have confirmed the identity of the deceased individual that was...
Read more
Sports

The record had stood since 1974, the year Robertson retired.The record-breaking moment occurred Monday night during the Wizards' game on the road against...
Read more
Sports