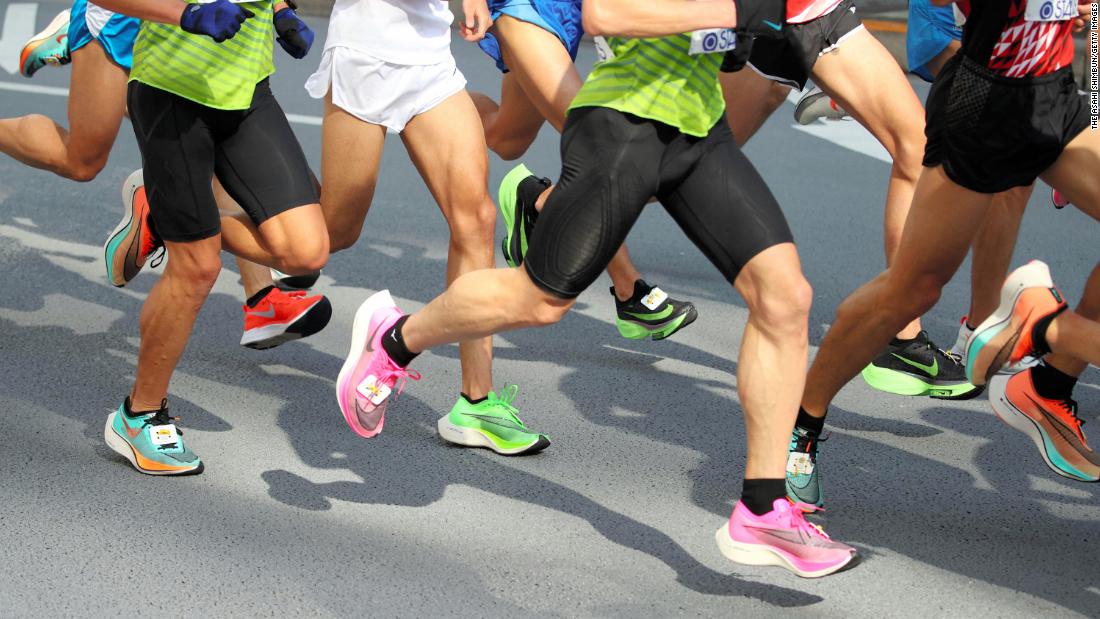 That’s because, in his quest to make the US Olympic team, Ferlic sees Nike’s range of super shoes, which have revolutionized distance running in recent years, as giving him an edge.

The 27-year-old Ferlic says he yearns to celebrate athletes for their physical achievements and “stop having this ridiculous debate about what shoes people were wearing,” but realizes that moment has long gone.

These days, Nike’s most advanced racing shoes are no longer the preserve of elite runners. Park runners, casual joggers and trendy hipsters are all wearing them.

The Nike Air Zoom Alphafly NEXT% contains a carbon fiber plate that supposedly delivers a propulsive sensation to the runner, as well as a thick, foam sole and two streamlined pods in the forefoot. Compared to the ZoomX Vaporfly NEXT%, another hugely popular model of Nike racing shoes, the Alphafly has more foam and provides additional impact protection and cushion, according to Nike.

“It’s such a good product that it’s promoting itself,” says Ferlic, who will continue to wear Vaporflys in addition to Nike’s ZoomX Dragonfly spikes for track racing. He previously had a Nike professional contract, which he signed in 2016.

Both the men’s and women’s official marathon records were run in versions of the ZoomX Vaporfly Next%. Those runs proved plenty of evidence of the potency of Nike’s technology.

Kenyans Kipchoge and Brigid Kosgei took sizable chunks out of the previous marathon world records with Kipchoge lowering the bar by 78 seconds and Kosgei by 81 seconds in 2018 and 2019 respectively.

Michigan-based Ferlic contends that the initial rollout of the Vaporflys was akin to doping in that those wearing the shoes had a clear advantage over the chasing pack.

He’s not the only athlete to say that.

On the heels of Nike’s success, other leading shoe brands, including Adidas, Asics, Brooks and New Balance among others, have come out with their own versions of a super shoe, featuring a carbon fiber plate and ultralight foam.

But now that most athletes seem to be running in them, analysts say the field is leveling out again.

“Fueled by our steadfast focus on bringing innovation to athletes, running continues to deliver sustainable growth to Nike. We remain passionate about and committed to track and field, and we look forward to the continued growth and success of the sport for years to come,” said Nike in a statement sent to CNN.

Initial prototypes of the shoes were only given out to select athletes such as Kipchoge at the 2016 Rio Olympics. Despite being dropped by Nike, Ferlic views it as an advantage to not be tied to a shoe brand.

He argues that an Adidas athlete would have to decide between their loyalty to Adidas or their desire to achieve their childhood dream.

“I’m almost glad I don’t have to make that decision,” says Ferlic. “I’m going to wear the best footwear on the day.”

Another long-distance athlete and friend of Ferlic, Zach Ornelas, believes that Nike is scaling back on sponsoring all but the very best athletes.

“Nike knows they have the best shoes. They don’t need to give money to people,” Ornelas tells CNN Sport.

“People are going to wear their shoes no matter what. And the people who have been dropped: they’re working out and racing in Nike shoes.

“And that’s sad. And luckily, I’m in a position where I don’t need to win a race to eat, I have a job. But if running was my full-time job, I’d be in Vaporflys.”

Nike said the claim that it is scaling back on sponsorship due to the success of the shoe is factually inaccurate.

In its statement sent to CNN, Nike said: “We have been a longstanding supporter of the sport and remain extremely proud of our commitment.

“Running is not only our heritage, it’s our largest performance business. Fueled by our steadfast focus on bringing innovation to athletes, running continues to deliver sustainable growth to Nike.”

A sports scientist at the University of Michigan, Geoff Burns, who specializes in running and biomechanics and is also a keen runner, is more than happy to splash out $250 on a pair of Nike’s running shoes. “They’re quite different than previous shoes in several ways,” Burns tells CNN Sport.

“One of the things that is very different is how soft they are. When you’re running in them, it really does feel bouncier.”

According to Burns, the shoes also add an extra centimeter to a centimeter-and-a-half to leg length.

When it comes to how the shoes have been regulated, Ferlic believes that World Athletics should have put measures in place to prevent Nike’s advances in shoe technology.

“They made the regulations to fit around the current technology that already exists,” says Ferlic.

In the future, he would like to see new shoes come before a review board to help prevent a “perpetual cycle of companies now trying to eke out the best performance within the framework and then coming up with something new.”

World Athletics told CNN Sport that it would “respect the existing shoe heights that were established in the market,” adding that “it was always going to take time for a critical mass of the race results to work through to a point where World Athletics felt it was time to intervene in a more proactive manner.”

The organization added: “All new shoes and prototypes have been and will continue to be reviewed against the regulations before being used in international competition.”

Burns also believes that regulations must exist for companies to innovate insofar as results in the shoes still “afford meaning to performances.”

And just as Formula 1 update their rules every year, there is no reason why track and field rules cannot be updated more often “if there’s an appetite for it,” Burns says.