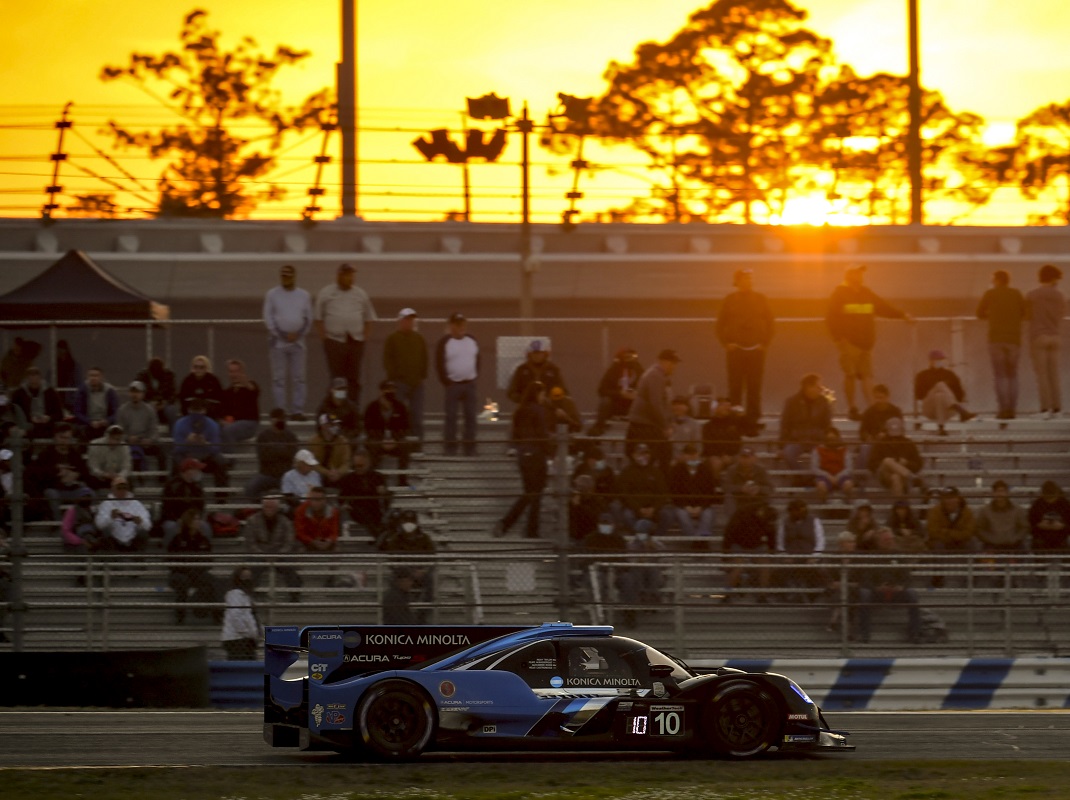 DAYTONA BEACH, Fla. – At three-quarter distance in the 59th Rolex 24 at Daytona, Wayne Taylor Racing found its way to the front of the field at Daytona Int’l Speedway.

NTT IndyCar Series star Alexander Rossi was at the wheel of the Taylor team’s Acura DPi as the 18th hour of competition was completed just before 10 a.m. ET.

Co-driving with Helio Castroneves, Ricky Taylor and Filipe Albuquerque, it was Castroneves who wheeled the car for most of the 17th and 18th hours before Rossi took over.

“It’s been absolutely amazing. No question, coming from Penske to Wayne Taylor Racing … it’s interesting, trying to make sure the car is good not only in the beginning, but at the end (of stints),” said Castroneves. “A different mentality, but right now we’re ahead of the game.”

The No. 01 Chip Ganassi Racing Cadillac was second in DPi at the three-quarter benchmark, 5.572 seconds back with Kevin Magnussen driving. Felipe Nasr was running third in the No. 31 Whelen Engineering Cadillac.

With just over five and a half hours to go, the No. 31 was taken to the garage with gearbox issues. Nasr reported the machine was “stuck in third gear” before taking it pitside.

Tower Motorsport’s No. 8 Oreca with Mattheiu Vaxiviere remained in control of the LMP2 class, with a second and a half lead over the No. 18 Era Motorsports Oreca of Kyle Tilley.

The GT Le Mans class continued to be ruled by Corvette Racing, with a one-two punch led narrowly by Nick Tandy in the No. 4 C8.R over teammate Jordan Taylor in the No. 3 C8.R.

Tandy’s co-driver, Tommy Milner, was part of a photo finish for Corvette Racing in 2016 at the Rolex 24 and noted that it could happen again on Sunday afternoon.

“We’re definitely not counting our chickens yet — there’s still a long way to go,” said Milner. “It would be fun to see two Corvettes racing at the end, racing hard, but it wouldn’t surprise me if there was a red or black car too.”

The GTD class featured a thrilling battle between Maro Engel in the No. 57 Winward Racing Mercedes-AMG and Daniel Serra in the No. 21 AF Corse Ferrari 488 GT3 through the 18th hour.

The duo exchanged the lead several times, with Serra’s Ferrari taking the lead by a nose several times in the tri-oval but Engel’s Mercedes leading in the infield section.

At the end of the hour, Serra was in front by two seconds in class.