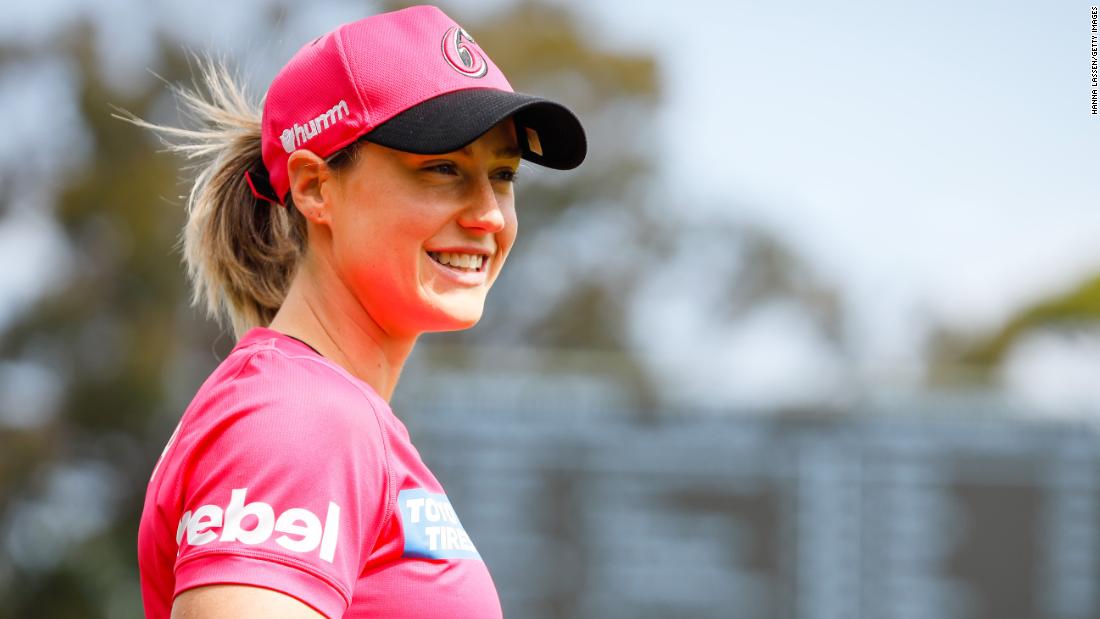 “It’s probably something my dad said to me a long time ago,” Perry tells CNN Sport. “And that’s the harder you train, the luckier you get. If you’re dead set on doing something and you just constantly put in consistent work and effort, I think it always pays off in the long run.”

During her storied and glittering career, the 30-year-old — along with her all-conquering Australian teammates — has soared to new heights: a 2013 Cricket World Cup triumph in India, five T20 World Cup titles across a decade of dominance and, earlier this year in New Zealand, a new world record for consecutive one-day international victories.

“We certainly feel incredibly privileged. And, obviously, the other players that played across that period of time, we’ve been really lucky,” she acknowledges.

“I think we’ve had some wonderful players, some of the best of a generation in our team and some great support staff and coaches that have led us around the world playing cricket.

“And it’s been really lovely obviously to experience such sustained success over a little period of time now. It’s a really lovely group to be part of.”

Amid all the elation of victory, though, Perry is no stranger to adversity following the serious hamstring injury suffered during last year’s T20 World Cup on home soil. It meant surgery, then months of rehabilitation to get back to where she is today.

“I’m doing great, thanks,” Perry reflects. “After any sort of longish-term injury, you always take a little while; everyone’s back playing to really find your feet a hundred percent. But I’ve actually really enjoyed that process and I really loved training and then working with some of our coaches to find a really good rhythm again.

“And it’s been nice to put that to the test in games, and at times, it’s felt pretty good and other times there is probably a few little things to keep working on. But yeah, I think that’s really exciting leading into a new season next year.”

Perry — who grew up in the Sydney area – has successfully negotiated the long road to recovery. But did those doubts about returning to the peak of her powers ever creep in?

“I think anyone does whether you’re injured or not, when we sort of go through various things, whether it’s a bit of a slump in form or things just not going away or whatever it is,” she points out.

“I think you always kind of have moments of self-doubt. But I think that’s quite different to, you know, I guess probably having an innate belief in yourself at some deeper level. I’ve kind of been lucky to build that up with the help of a lot of people and support. There’s always a way to get through things and you just got to keep at it.

“I’ve actually really enjoyed the challenge and I still probably got a bit to go. But I think that’s really added some motivation for me in the last 12 months or so.”

Despite the personal disappointment of missing out on an ultimately victorious final for her country against India in 2020, Perry looks back with pride on a truly groundbreaking day, which saw a huge crowd of over 86,000 at the famed Melbourne Cricket Ground on International Women’s Day, setting a record attendance for a women’s sporting event in her homeland.

“I think, first and foremost, just complete joy and absolute euphoria for our team but also for Australian cricket and the sport more broadly,” she recalls.

“It was a particularly special moment in time for our sport and for women’s cricket in Australia to have so many people come to the game, for it to be such a big event on a global scale and for the team to be successful.”

Such is her status in the game, the star all-rounder is also using her global platform to powerful effect.

“We probably feel like we’re part of a slightly bigger thing, too, in terms of the moment of women’s sport and just the growth and development that’s occurring there. So, you know, we’re in a really fortunate position and it’s a lovely responsibility to have.

“And I think our message is just to make the most of every opportunity that comes your way and to really have a go, because there’s so many great things that come from being a part of sport.”

Perry’s scheduled to play for Birmingham Phoenix in the first-ever season of the Hundred competition this summer in the UK.

“I’m really looking forward to it,” she says. “I think these sort of shorter format competitions around the world have had a huge role in the development of cricket and capturing more people’s attention. And we’ve been really lucky in Australia to have the WBBL (Women’s Big Bash League) for six years now. And that’s been just wonderful for the development of the game.

“And I think equally with a whole new format of cricket in England with the Hundred and the real aim and focus to get more people involved in the game and interested in bringing new fans along.”

But Ellyse Perry’s story is not complete without reference to her “other” career.

At just 16, she became the youngest person ever to represent her country at cricket. But at the same time, a thriving football career was also developing, and she’d go on to play for Australia at the 2011 FIFA World Cup in Germany.

Despite defeat to Sweden in the quarterfinals, her goal in that match was hailed by fans as the best of the tournament. Perry, though, recognized that “it got to a point” where playing two sports just wasn’t feasible.

“I think that’s only a good thing and really speaks volumes for how far we’ve come. And I guess, naturally, I just fell into playing cricket over soccer, probably without really making a big decision. Probably the professionalization of cricket happened first and probably had more opportunity in cricket, too.”

Two World Cups in two different sports. A plethora of career trophies and accolades. And even being named the ICC Women’s Cricketer of the Decade. A fitting reward for her outstanding talent and relentless work ethic.

And there’s nothing lucky about that.