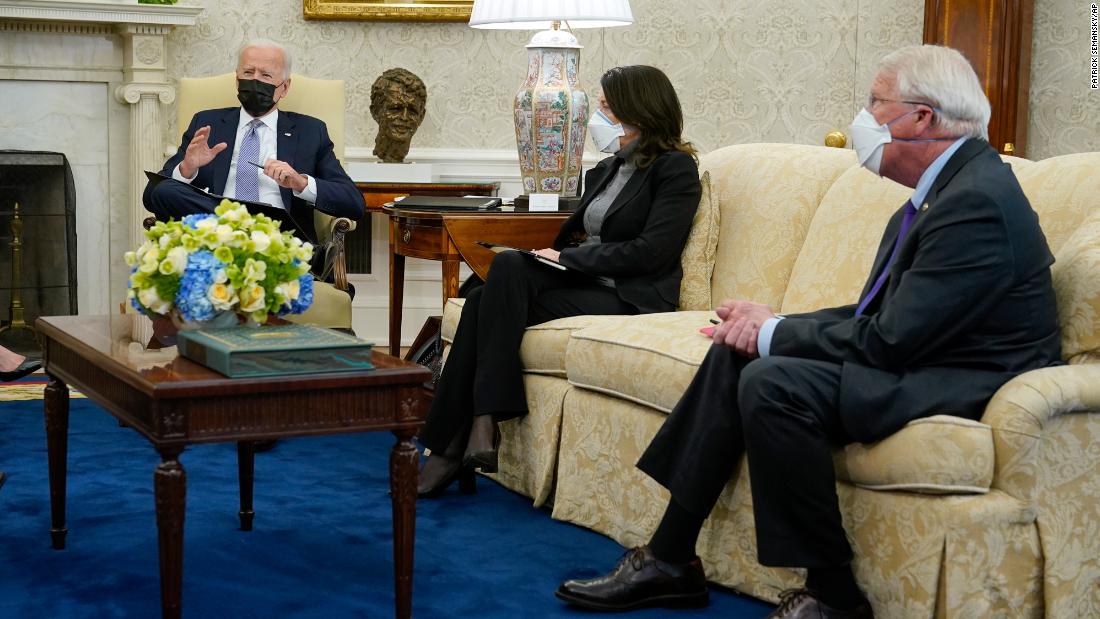 Despite overtures from the White House to invite Republicans to the Oval Office this week and Biden’s continued promise to reach across the aisle, Republicans are skeptical the meetings will lead to substantive progress, viewing the infrastructure debate as a replay of negotiations on a Covid relief bill that never materialized between Democrats and Republicans.

“Here is where the disconnect that I am concerned about is: We are going (to the White House), we are negotiating, the President is being very sincere, but in the end, we get rolled because there is a partisan process. You saw that happen under Covid, and I am concerned about it,” said Sen. Shelley Moore Capito, a West Virginia Republican and the ranking member of the Environment and Public Works Committee who has met with Biden on infrastructure.

The growing partisanship around infrastructure — once heralded as ripe for Republican and Democratic buy-in — has emerged in recent weeks as just the latest battleground in the fight between the two parties. Republicans have made it clear they are both disappointed in the scope of Biden’s infrastructure plan and the ways he plans to pay for it.

“I don’t think there is going to be any appetite among Republicans for doing anything that undoes any of the 2017 law,” said Senate Minority Whip John Thune of South Dakota, referring to the tax overhaul Republicans passed in 2017. The No. 2 Senate Republican keeps tabs on where members stand on issues.

Sen. Roy Blunt, who is in GOP leadership, echoed Thune’s remark and said he thinks a more narrow bill, as well as backing off increasing the corporate tax rate, would demonstrate Biden’s commitment to bipartisanship.

“I think it’s all about whether they’re willing to deal with infrastructure — traditional infrastructure as a separate issue — and figure out ways to pay for it, like we always have, without getting into the 2017 tax bill,” the Missouri Republican said.

Even a moderate Republican like Sen. Lisa Murkowkski of Alaska has signaled she’d need to see the legislation significantly scaled back before she could support it.

While Biden’s $2.3 trillion plan includes billions for traditional infrastructure projects like roads and bridges, the plan also invests significantly in areas like home health care workers. The White House plans to introduce the second prong of its sweeping jobs package focusing on more human investments in areas like paid family leave and expanded educational opportunities, which Republicans may have a hard time backing — shortly before Biden’s joint address to Congress on April 28, according to a White House official.

The proposals will would total more than $4 trillion in new spending, officials say. The scope is unabashedly ambitious, with Biden and his top advisers viewing the effort through the lens of past transformative progressive economic agendas from the likes of Franklin Delano Roosevelt or Lyndon Johnson.

But one message White House officials are keen to get out to GOP officials, dozens of whom Cabinet secretaries or senior aides have spoken to in the last few weeks, is that there is an openness to break off pieces of Biden’s proposals that may have bipartisan support and pass them individually, according to two senior administration officials.

They stress, however, that any move in that direction wouldn’t put an end to their push for everything else in their wide-ranging proposals. Instead, those would likely end up packaged together in a single bill at the end of the summer.

Biden and his team also know there is a limited window for any dealmaking to occur, one official said. Democrats are itching to move something quickly, and there are plenty of intra-party issues to iron out before that’s possible.

“I’d say there’s about a month for actual negotiations to break out,” one Democrat close to the White House said. “If they don’t, it’s time to move.”

Biden himself hasn’t weighed in on his preferred process, only that he wants to see progress by the end of May. The President remains in regular consultation with Senate Majority Leader Chuck Schumer and House Speaker Nancy Pelosi, officials say. As a 36-year veteran of the Senate, Biden is reliant on the two long-time congressional leaders to chart the best path forward.

White House officials also acknowledge the legislative process will be starkly different from the effort that led to the passage of Biden’s $1.9 trillion Covid relief package. There is an understanding that the relief package was considered an emergency. This legislative push will be different — one that takes months and will include intensive negotiations as the cross-cutting priorities, even among Democrats in both chambers, run headlong into one another.

Whether that compromise and change comes with Republicans, however, is still an open question.

So far, the legislative strategy is still not clear. Democrats could use a process known as reconciliation, which requires just a simple majority vote, but Schumer would need every single one of his Democratic members to back the plan, something that isn’t clear right now as Sen. Joe Manchin, a Democrat from West Virginia, has said he wants to see a serious bipartisan effort before he’d go along with a bill that just gets Democratic votes.

Meanwhile, several GOP senators say that despite the administration meeting with some of their colleagues who sit on committees relevant to Biden’s infrastructure proposal, they are not convinced the President is serious about bipartisanship.

“They are not doing any outreach that is significant,” argued Republican Sen. Rob Portman of Ohio, noting that while it is “great” that GOP Sens. Roger Wicker of Mississippi and Deb Fischer of Nebraska were invited to meet with Biden at the White House this week, “my understanding was there was no negotiation.”

Sen. Jerry Moran of Kansas told CNN that so far, he’s “seen no evidence” that Biden plans to involve Republican input and modify the bill, pointing to the drafting of the proposal. “I hope to get a bipartisan infrastructure package, but I have not felt it,” he said.

Some concerned senators are taking bipartisan negotiations into their own hands. And a select number of Republican senators is weighing whether to release a counter proposal to Biden’s.

A bipartisan group of 20 senators, who worked together to help push along a deal on Covid relief, is planning to meet Thursday to see if they can make any headway on infrastructure, Republican Sen. Mitt Romney of Utah told reporters at the Capitol on Wednesday.

Biden directed his senior team to follow up with Republicans on any policy issues raised in an earlier Oval Office meeting, the officials said, and he also expects proposals from the GOP attendees to be sent to his team. A second bipartisan meeting is likely as soon as next week, an official said.

Still, the distrust is palpable in the wake of unilateral Democratic action on the Covid relief bill.

Both Portman and Blunt told CNN they were meeting on Wednesday with White House officials. “Let’s see if it goes anywhere,” Blunt said.