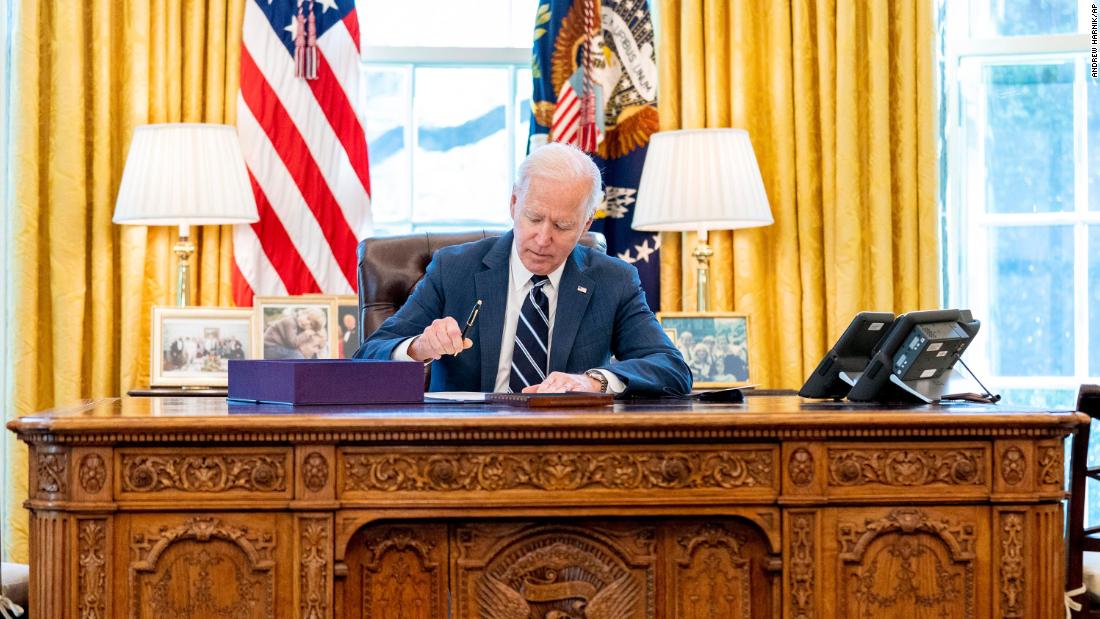 The multi-prong effort is aimed at turning the bill into something Democrats can run on, not run away from, in the coming years, including in the politically critical 2022 midterms. The ad, which is set to run nationally, in battleground markets and digitally in the coming weeks, is the centerpiece of the broader effort, which aims to turn the job of touting the bill into an “all of party” effort.

“If someone is running for dog catcher in Des Moines, or running to register deeds in Wyoming, we want them to talk about this,” DNC spokeswoman Adrienne Watson said. “In fact, we will make sure they are armed to the teeth with what it does and why it’s so historic.”

The ad features remarks from Biden after the Senate passed the American Rescue Plan, intermixed with images of businesses reopening, American families together and vaccines speeding through factory lines.

“By passing the American Rescue Plan, we’ll have heeded the voice of the American people, not ignored their voices,” Biden says in the spot, before going through some of the specific planks of the bill, including money to increase vaccine manufacturing, establish more vaccination sites, send stimulus checks to millions of Americans and curb childhood poverty.

“When we took office … I promised the American people that help was on the way,” Biden says in the close of the spot. “Today, I can say we’ve taken one more giant step forward in delivering on that promise.”

In addition to the ad, the DNC has sent a detailed strategy guide on touting the bill to state parties, DNC members and national Democrats. They will also begin to train state party officials and grassroots community leaders on how to tout the bill. The sessions will be led by DNC senior adviser Brad Woodhouse.

Biden’s own messaging efforts to sell the bill will not be limited to solely this ad, however. A White House memo obtained by CNN this week detailed blitz by Biden, Vice President Kamala Harris and a host of other top administration officials in the coming weeks.

In a video for state and local Democrats, DNC chair Jaime Harrison argued that while the work of passing the legislation is done, the work of selling it to the American people is far from over. Harrison tells local Democrats that the party needs “to make sure that voters know how we delivered for them when it counted most.”

“This is our time to help our friends and neighbors understand how the American Rescue Plan benefits them, and what Democrats are able to deliver when we have their support,” Harrison says. “We need to spread this message far and wide. Tell everyone. Scream it from the rooftops.”

The concerted effort on Biden’s first major legislative achievement is an acknowledgment that the party in power is often punished in midterm elections, in part because of the opposing party’s ability to seize on complicated legislation and use it to turn voters against the controlling party.

And the urgency with which Democrats feel they need to tout the relief bill is a clear sign that the party is trying to learn the lessons from legislative achievements early in Barack Obama’s presidency, including the nearly $800 billion Recovery Act passed in 2009 and the fight over the Affordable Care Act, the sweeping health care overhaul signed into law in 2010.

While the latest relief package is more popular than either bill ever was, Republicans seized on the lengthy, complicated bills in the earliest days of the Obama administration. The results for Democrats were disastrous: Republicans took control of the House and narrowed the Democratic margin in the Senate, leading then-President Barack Obama to describe the midterms as a “shellacking.”

“No one really knows what the ultimate political impact will be 20 months from now,” said Doug Heye, a Republican operative who was communications director of the Republican National Committee during the fight over Obamacare. “In 2010, Democrats were predicting political doom for any Republican opposing the Joe Biden-led stimulus bill. Republicans won 63 House seats that November.”

Biden recently told the House Democratic Caucus that Democrats were not as focused on touting their achievements early in Obama’s tenure and that the party “paid a price … for that humility.”

Kathleen Sebelius, Obama’s health and Human Services Secretary at the time, said one of the biggest issues with selling Obamacare was that most Americans “saw no impact from the bill until 2014,” something that is not the case with the Covid relief package.

“People have to feel the impact of what happens quickly, they have to know their lives are better,” Sebelius said. “Things that are very tangible have to happen visibly and quickly.”

Republicans have responded by lambasting the bill as too expensive and a labeling it a “socialist wish list.” They have also attempted to tie it to House Speaker Nancy Pelosi, not Biden. Michael McAdams, spokesman for the National Republican Congressional Committee, said that history could repeat itself, even if the bill is popular now.

“We are going to make sure voters understand the rampant waste that Democrats snuck into this so-called covid relief bill,” McAdams said. “It’s a socialist wish list for Nancy Pelosi and her democratic allies and it is going to hurt them in 2022.”

Pressed on the current popularity of the plan, McAdams added, “When voters cast their ballots in 2022, there is going to be a very different sense of the bill’s popularity.”

To date, Republicans have not been able to do that with either the Biden administration or this Covid relief bill. A CNN poll released on Wednesday found that 61% of Americans supported the nearly $2 trillion economic relief package, with only 37% opposing the package, with several key provisions in the bill — including providing larger tax credits for families, providing funding for student K-12 to return to the classroom, and sending stimulus checks worth up to $1,400 per person to most families and individuals — polling better than the bill as a whole and with a majority of Republicans surveyed supporting the provisions.

To keep this bill popular, the Biden White House is leaning on all levers of Democratic power to tout and sell the proposal, specifically heralding direct payments to families, efforts to curb childhood poverty and speeding up vaccine distribution.

The Democratic Congressional Campaign Committee will begin by running digital ads touting the relief package in swing districts across the country on Friday. The targeted ads specifically tout Democrats in frontline districts who voted for the bill such as Tom O´Halleran, a Democrat who has represented a competitive district in Arizona since 2017.

Rep. Sean Patrick Maloney, chair of the DCCC, said he believes this bill gives Democrats the messaging advantage going into the next two years, and was blunt when asked about Republican attempts to attack the legislation.

“I really hope that Kevin McCarthy is dumb enough to think that this is 2009 (again), because then he is going to enjoy the minority for a long time to come,” Maloney said, noting that attacking a bill that puts money directly in American pockets could prove difficult.

“Our job is to tell people the good news of what is becoming law and to make sure they hear it and feel it and see it in their daily lives,” Maloney said. “The Republicans’ job is to lie about what’s going on and hope they can fool everybody. I think we have the better task.”

And Sen. Gary Peters, the newly installed chair of the Democratic Senatorial Campaign Committee, told reporters recently that not only will the bill be something his members can run on in 2022, but it will be something they use against Republican candidates.

“This is an easy sale. This is a bill that helps people in a meaningful way, and it is clear recognition for folks as to where each of the parties stand where it comes to helping everyday folks,” he said. “We are confident they are going to remember. When it comes to election time next year, they are going to know who stood with them in their time of need and who abandoned them. It is very clear.”

Democratic super PACs are also stepping up in the fight, including Biden’s top super PAC during the 2020 campaign, Priorities USA.

The super PAC announced on Wednesday that two ads — one titled “Help is on the Way” that attacks Republicans and another titled “Jumpstart” that argued Biden and Democrats are “getting right to work” — would begin airing in Arizona, Florida, Georgia, Nevada, Pennsylvania and Wisconsin, six swing states.

“There is no such thing as doing too much. We need to constantly remind people of who stood for them when they needed it most,” said Guy Cecil, chair of the super PAC. “Anything short of that allows Republicans to rewrite history and distract the country with the same divisive tactics they’ve deployed for the last decade.”

Though the former President offered his support of President Joe Biden's plans to bring home American troops, he urged his successor to draw...
Read more
U.S

"I have been on administrative leave for nearly three months without any explanation or updates, and there is no sign that NSA will...
Read more
U.S