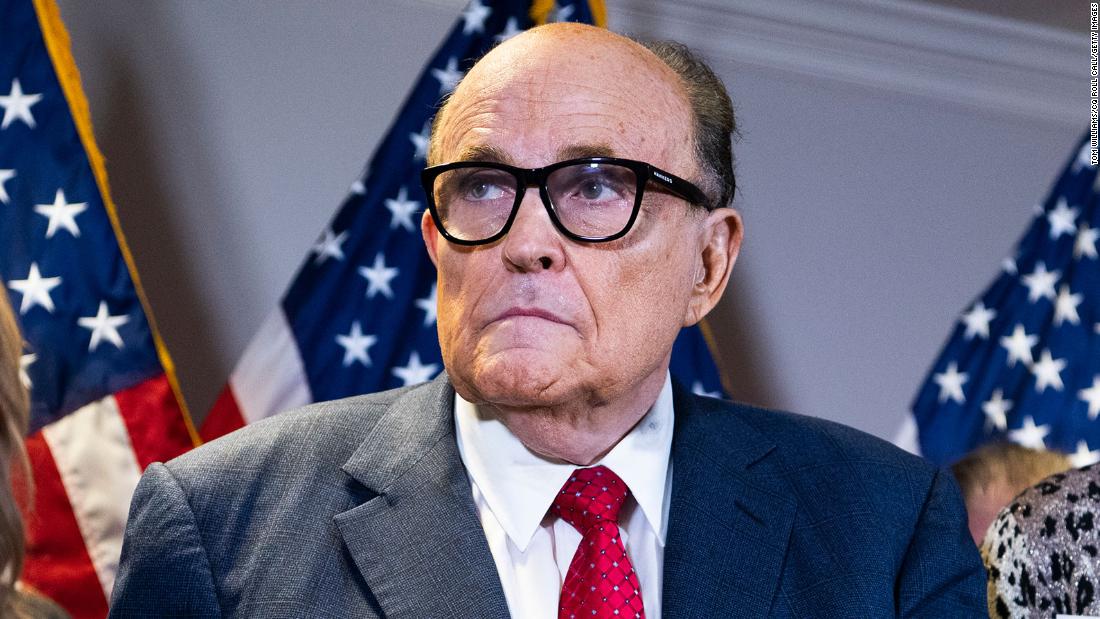 Justice Department officials in Washington said a search warrant would be an extraordinary step to take against a lawyer — who is also a key adviser to a president — in an investigation into the possible violation of foreign lobbying laws.

The matter remains open, and any decision rests with the Biden administration.

The issue got the attention of officials as high as Jeffrey Rosen, deputy attorney general, who along with other officials at Justice headquarters and the US attorney’s office in Manhattan decided not to make a final decision, these people say, in part because there would soon be a change in the administration.

But the issue was sensitive enough that Rosen issued a December 30 memorandum adding new hurdles for prosecutors to consult with the Justice Department’s criminal division in Washington and with the deputy attorney general before seeking a warrant to search the offices of a lawyer.

The decision of how and whether to proceed with the investigation into Giuliani, Trump’s personal attorney, will be an early test for the Biden Justice Department. Judge Merrick Garland, the nominee for attorney general, is awaiting a Senate hearing, and it’s unclear whether the interim leaders of the department would want to approve an extraordinary step in a high-profile investigation before he takes the reins.

Biden’s message has been to restore unity, which some observers interpret as not pursuing past investigations involving politicized issues, such as Giuliani’s Ukraine efforts, which were at the center of Trump’s 2020 impeachment trial. At the same time, the Biden administration is facing pressure to apply justice evenly and restore the Justice Department’s independence.

The US attorney’s office in Manhattan, which has a reputation for independence, is leading the Giuliani investigation that began more than two years ago, and the decision on a subpoena or search warrant could factor into whether there is a case to charge.

The discussions last year centered on a range of possible options, including a voluntary request and a search warrant, to try to obtain evidence that investigators believe they need in the probe, according to a person briefed on the matter.

The people familiar with the discussions would not speak to CNN on the record about an ongoing investigation.

Representatives for the US attorney’s office in Manhattan and the Justice Department declined to comment for this story. Rosen did not respond to a request for comment.

Early in the probe, investigators obtained access to some of Giuliani’s communications through their investigation into two of his Ukrainian associates, CNN has previously reported.

Late last year, after interviewing witnesses and subpoenaing documents, prosecutors approached officials in Washington about trying to expand that access, including the possibility of obtaining a search warrant for Giuliani’s communications and electronic devices.

A search warrant of a then-president’s attorney would require approval from senior Justice officials in Washington because of the invasive nature of the search and attorney-client protections.

Prosecutors would also need to detail why they have a good basis to suspect that evidence of specific crimes is contained within the devices. Rosen’s year-end memo has stiffened requirements for prosecutors, including that no such search warrant can be sought until the Criminal Division at Justice headquarters and the deputy attorney general sign off.

Officials in Washington pushed back during the conversation last year and cited issues ranging from the proximity to the election and ongoing election litigation to the strength of the case, the people said. Officials discussed whether other methods could be used to obtain evidence, since a search warrant would be broad and inherently raise questions about communications involving Trump, according to a person briefed on the matter.

One source said there was also some skepticism from lawyers with the national security division.

Some officials at Justice headquarters raised concerns that the New York probe hinged on what they believed was a novel interpretation of the Foreign Agents Registration Act, which requires that individuals disclose with the Justice Department lobbying activities on behalf of foreign governments or officials.

Prosecutors are exploring the theory that Giuliani may have been engaged in undisclosed foreign lobbying for Ukrainian officials when he sought the ouster of the US ambassador and an investigation into the Bidens for his own personal benefit at the same time he was pursuing those efforts as Trump’s attorney, the people said.

It would be an unusual theory for a Foreign Agents Registration Act case, the people said, particularly since Giuliani was publicly touting his efforts, including on television, and it isn’t clear if he was paid by any foreign officials. Some prosecutors debated whether the evidence clearly establishes a foreign lobbying violation, since Giuliani could argue that he was acting on behalf of the former President, the people briefed on the discussions said.

During the discussion, the Washington officials said it would be unusual to issue a search warrant against a lawyer in a Foreign Agents Registration Act investigation, let alone an adviser to the then-president, according to people familiar with the conversation. They also said the theory of the case was untested, the people said.

The statute has been on the books for decades but has recently been used more by the Justice Department and has resulted in two high-profile losses.

In 2019, Greg Craig, who had been a White House counsel in the Obama administration, was acquitted at trial of Foreign Agents Registration Act violations, and a federal judge threw out the conviction of a former associate of Michael Flynn, finding that the evidence was “insufficient.” The Justice Department has appealed the judge’s ruling on the Flynn associate.

Giuliani, who has not been accused of any wrongdoing, has maintained his activities in Ukraine in his role as a private attorney for Trump.

Robert Costello, an attorney for Giuliani, told CNN there has been no outreach from federal prosecutors. He has said he does not believe there is an active investigation into Giuliani because his client has not done anything wrong.

NBC reported in December that Justice officials had discussions about requesting Giuliani’s communications.

Two of Giuliani’s associates, Lev Parnas and Igor Fruman, were indicted on campaign finance charges, stemming from an alleged straw donor scheme. The men met with Giuliani and helped introduce him to Ukrainian officials. They have pleaded not guilty.

During Trump’s first impeachment trial, administration officials testified about a shadow campaign run by Giuliani to pressure the Ukrainian President to announce an investigation into the Bidens while falsely accusing the then-US ambassador, Marie Yovanovitch, of being an anti-Trump partisan.

Prosecutors in New York also subpoenaed multiple witnesses for documents and testimony relating to any business dealings they’ve had with Giuliani. Last fall, investigators spoke with several businessmen about Giuliani’s lobbying efforts, according to a person familiar with the matter.

Initially prosecutors alleged that Parnas’ effort to remove the US ambassador was conducted, in part, at the request of one or more Ukrainian officials. In a court filing, prosecutors wrote the superseding indictment “streamlines certain factual allegations.” Prosecutors never identified the official.

Lawyers for Fruman and Parnas have said no Ukrainian official exists and called it a “false narrative” spread by the Justice Department, according to a court filing. They asked a judge to order prosecutors to explain whether any information initially presented to the grand jury about the US ambassador had been withdrawn. The judge has not ruled on the motion.