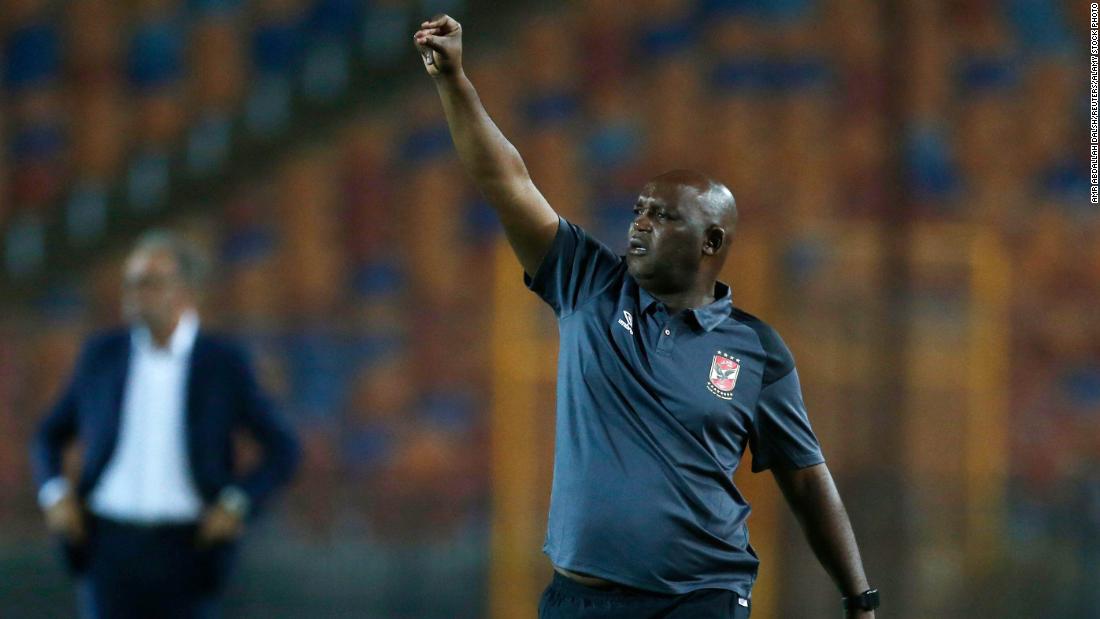 Mosimane won a record five league titles in seven years with South African club Mamelodi Sundowns, was part of the Bafana Bafana coaching staff at the inaugural FIFA World Cup hosted on the continent and became Al Ahly’s first ever Black coach in 2020.

If Al Ahly win that match, the Egyptian club will face Bayern Munich for a place in final. Bayern will be the favorite to win the semifinal, but expectations are always high at a club like Al Ahly, which says it has 60 million fans in the Arab world and has won 140 trophies.

Mosimane grew up in apartheid South Africa, so he is understandably proud of his coaching achievements, given his humble roots. And it’s Mandela’s own legacy that rightly inspires him.

“Have you ever thought, in our time, that South Africa can have a Black president as Nelson Mandela?” enthuses Mosimane as he reflects on the life of a man who was incarcerated for 27 years. “That is an amazing story.”

Mosimane himself has reached great heights, and his gilded touch has seen all of the club teams he’s coached claim silverware. His proudest achievements came when he conquered the Confederation of African Football (CAF) Champions League on two separate occasions — firstly with Sundowns in 2016 and then Al Ahly four years later.

“Can you believe that somebody from the township like me, from the background of apartheid, from the humble beginnings, can be the first person to win the Champions League in South Africa? And win it twice and become coach of the year on the continent,” he says with almost a sense of disbelief.

‘Club of the century’

Last season, Mosimane did what nobody in world football has achieved to date. He was a part of two teams that secured trebles in their respective countries. First, he won three trophies in South Africa, including the league, in what is widely regarded as the strongest African domestic competition.

And then he followed this up with Al Ahly, leading it to the continental crown as it beat arch-rival Zamalek 2-1 in the CAF Champions League final.

Al Ahly had in fact wrapped up the league title under René Weiler, who departed late in the season to be with his family in Switzerland, but Mosimane received a winner’s medal as he took over the team for the final two league games of the campaign and then guided the Red Devils to another triumph in the Egyptian Cup.

“Al Ahly is a club that demands success, and in Egypt and Africa, it’s known as the club of the century,” explained former Egyptian international turned pundit Yaser Elshanawany.

“There’s only one other club that’s won more trophies than Al Ahly in the world and that’s Real Madrid, so when you get this job there’s lots of expectation.”

“From the people I’ve spoken to at the club, they all tell me technically he’s very strong and knows how to analyze other teams. But he’s really loved by the players and his staff because psychologically he knows how to connect with them, and build relationships with them,” Elshanawany added.

It was a signature win that showcased Mosimane’s ability and also persuaded Al Ahly that it didn’t need to look outside the continent for a coach.

One of Sundowns’ stars over the last few years has been South African midfielder Hlompho Kekana.

He has seen first hand what makes Mosimane the coach that he is, as he’s been part of the Sundowns dynasty including that first CAF Champions League title.

“Pitso is obsessed with the game, that’s what gives him the edge,” Kekana says. “He digs deeper than anyone I’ve worked with in football.

“I’m not surprised to see his achievements. He’s instilled that mentality with the players and we are told not to see football as just a career, but something that can change the world.

“We’re more than just football players, and he’s told us we can use football to get an education and we can uplift our own lives and those around us.”

“I’ve not met Pep, but I can see why they have similarities,” says Kekana.

“Both play a possession-based game, but are always looking for perfection. Pitso was always looking for us to win matches, but he always wanted us to go out and express ourselves within our structures, never to sit back. To press high and keep the pressure on, never to let off, play with high intensity” the Bafana Bafana player said.

It’s this type of philosophy that Al Ahly President and club great Mahmoud El Khatib had admired from afar, and when Weiler departed at short notice, “Bibo,” as he’s affectionately known, moved for Mosimane.

“He’s a legend … it’s like having Kenny Dalglish becoming president of Liverpool,” explains Mosimane, referring to the former Scot who played and managed the English club.

“His head was on the block for appointing the first sub-Saharan coach to lead Al Ahly … Now, he’s proven right. We won the trophy and everything is good.”

Al Ahly hadn’t won the CAF Champions League in seven years and had lost two of the previous three finals.

“So we need to take a different approach and let’s get somebody who knows the continent — who lives in it.”

Coaches from Egypt, Europe and South America had been previously appointed at Ah Ahly, but Mosimane was a step in a new direction — the South African became the first Black and sub-Saharan to take charge of the Egyptian team.

Mosimane admits it’s probably “taken too long” for a Black coach to be appointed at the club, but said, “I don’t want to dwell so much on why. But it has happened now. I’m the one. I’m the ‘Chosen One.’ And what brought me here was not a political movement.

“I was brought here because of the titles that I won because I’ve defeated Al Ahly twice and one of the top teams here in Zamalek. And they know me. They know my name … it has nothing to do with color or politics.”

Despite Mosimane’s trophy-laden season, he was not recognized by FIFA on its coach of the season shortlist, as Liverpool’s Jurgen Klopp secured the prize for his sterling work with Liverpool as the Reds lifted the Premier League trophy for the first time — the club’s first domestic league title in 30 years.

“FIFA must also consider coaches outside of European nominees because these are world awards,” said Mosimane of FIFA’s Best Football Awards, suggesting that the Confederation of African Football (CAF) could lobby the world governing body to create a more “inclusive” shortlist of coaches, players and clubs.

Mosimane also referenced former Flamengo coach Jorge Jesus’ success in the 2018/2019 season when he guided the Rio-based club to the Brazilian league title and also South America’s prized club cup competition the Copa Libertadores, but was not recognized by FIFA for his success.

“Jesus, he’s the coach of Benfica now. He was the coach at Flamengo, he won lots of trophies and also deserved to be nominated. It’s not just about me. But it’s okay, we have to move on,” added Mosimane.

In response to Mosimane’s criticism, FIFA said: “The shortlist of candidates for the awards was selected by two expert panels: one for women’s football and one for men’s football.

“The two expert panels include high profile representatives from all regions with the aim of ensuring that the awards reflect the views of world football. That being said, we appreciate Mr. Mosimane’s comments as it is important that the protagonists express their views about the process.”

CNN did reach out to CAF for comment, but they did not respond to multiple requests.

“Our lives should not be about awards as coaches, we need to change people’s lives,” Mosimane says, backing up what Kekana had said about his former mentor.

Mosimane’s success has created a stir on the African continent and many have debated if he can be the first African to move from the continent to coach in one of Europe’s major leagues.

“Is this a possibility? Yes,” says Mosimane, before adding: “We have to be realistic to say Europe doesn’t have a lot of African coaches.

“I don’t want to politicize this and make it a case of playing the race card, but some things need to be told as they are.

“I mean, you cannot tell me all these big players, African players, who won the Champions League in Europe, who are living there and none of those Africans can have an opportunity to coach.

“Maybe in our children’s generation, things can change. Things do change … But first, Europe must accept and give chances to the European-born Africans, before we can talk about getting a chance … so it’s a long way.”

Mosimane needs no reminding that apartheid lasted almost five decades in South Africa, or that Al Ahly took over 100 years to appoint their first Black coach.

While he is realistic about getting an opportunity in the biggest leagues in the world, having survived apartheid and carved out success across the African continent, Mosimane draws strength from this: “Never, ever, ever underestimate a Black South African who comes from the township.”

And having seen what Mosimane’s done, perhaps it’s just a matter of time before the “Chosen One” shatters another glass ceiling.

r/motorsports – New Rider VS. The Highway