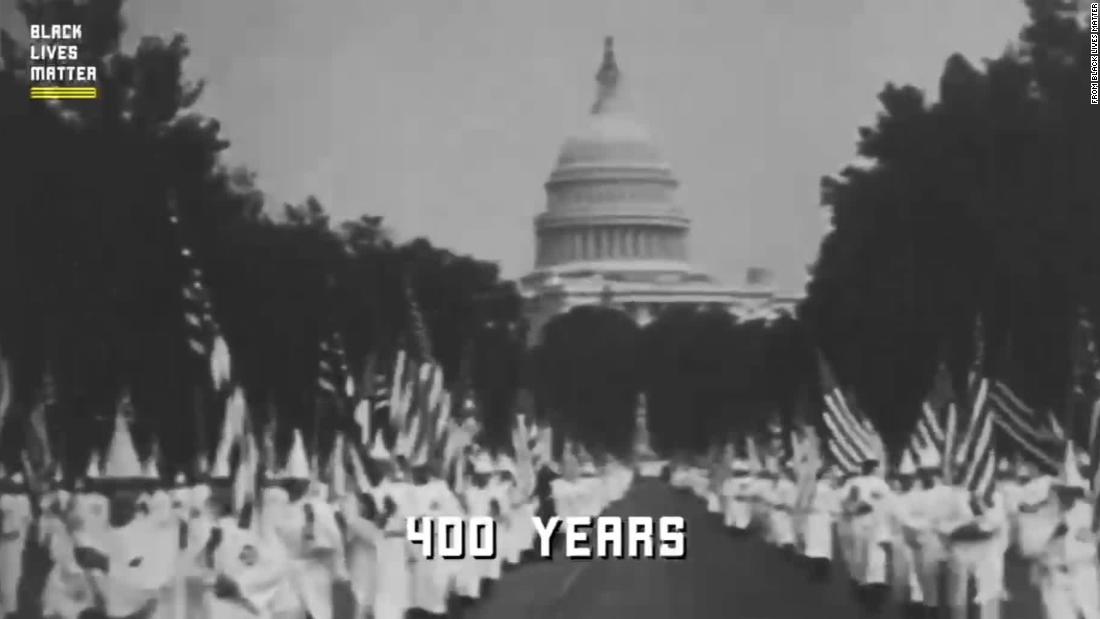 The ad shows harrowing clips of Trump supporters breaking glass windows at the Capitol and standing on the dais in the Senate chamber, and a noose that was erected on a wooden beam in front of the Capitol that day.

“You felt a fraction of what Black Americans have felt for more than 400 years,” the narrator of the ad says.

“The ad is really about holding both Trump accountable as well as all of those who advocate for and behave as white supremacists accountable,” Abdullah told CNN. “So we are asking members of Congress to take action to make sure Trump is actually convicted and barred from future office as well as looking at members of Congress and all elected officials who engaged in his heinous act.”

The ad promotes a Black Lives Matter petition that not only demands Trump’s conviction but calls for the removal of Republican lawmakers who encouraged the Capitol mob’s attempt to overturn the election.

The ad specifically targets Republican Sen. Ted Cruz, showing a clip of him saying “the election was rigged”– a false claim spread by Trump after he lost to President Joe Biden.

The petition also demands an investigation into ties between White supremacists and Capitol police, for digital media to permanently ban Trump from all platforms, the defunding of police, and for lawmakers to pass the BREATHE Act which calls for divestment of police and reinvestment into housing, education, health, and environmental justice for communities of color.

Abdullah said while Black Lives Matter is encouraged by Biden’s pledge for equity, the organization wants to see policy change.

“It’s important to also remember that those four years that Donald Trump was in office, he wreaked havoc,” Abdullah said. “And so there are policies that have to be undone and I’m glad to see them beginning to be addressed.”

The ad is also being released days after the Black Lives Matter movement was nominated for a 2021 Noble Peace Prize. Norwegian MP Petter Eide nominated the global movement “for their struggle against racism and racially motivated violence,” he wrote in his official nomination papers.
The nomination has already been blasted by critics who say Black Lives Matter is undeserving because it inspired demonstrators to burn buildings and loot businesses last summer. However, a study by the Armed Conflict Location & Event Data Project (ACLED) found that 93% of Black Lives Matter protests last summer were peaceful. Counterprotesters, agitators, White supremacists and other people not affiliated with Black Lives Matter were responsible for much of the violence that did occur.

Abdullah said Black Lives Matter is grateful for the nomination and its key mission is to advance justice and freedom. Last summer’s ongoing protests were necessary to shed light on the police violence against Black people.

“There are Black Lives Matter formally organized protests and there is the righteous rage of folks who have been oppressed,” she said. “Until there is justice, you cannot ask oppressed people to behave in the way that the state wants them to.”

America’s unemployment problem is much worse than it seems

"When we say maximum employment is a broad and inclusive goal, we don't only look at the headline numbers," Fed Chairman Jerome Powell...
Read more
U.S

Should you rent or buy a home? Ask yourself these 3 questions

"Take advantage of low mortgage rates and build equity!," your "buy" brain says. "Have flexibility and keep your costs of getting in and...
Read more
U.S

The hot new thing in tech: speaking into your phone

"This is my way to debrief and tell everybody what's going on," she told CNN Business. "It's not like it used to be...
Read more