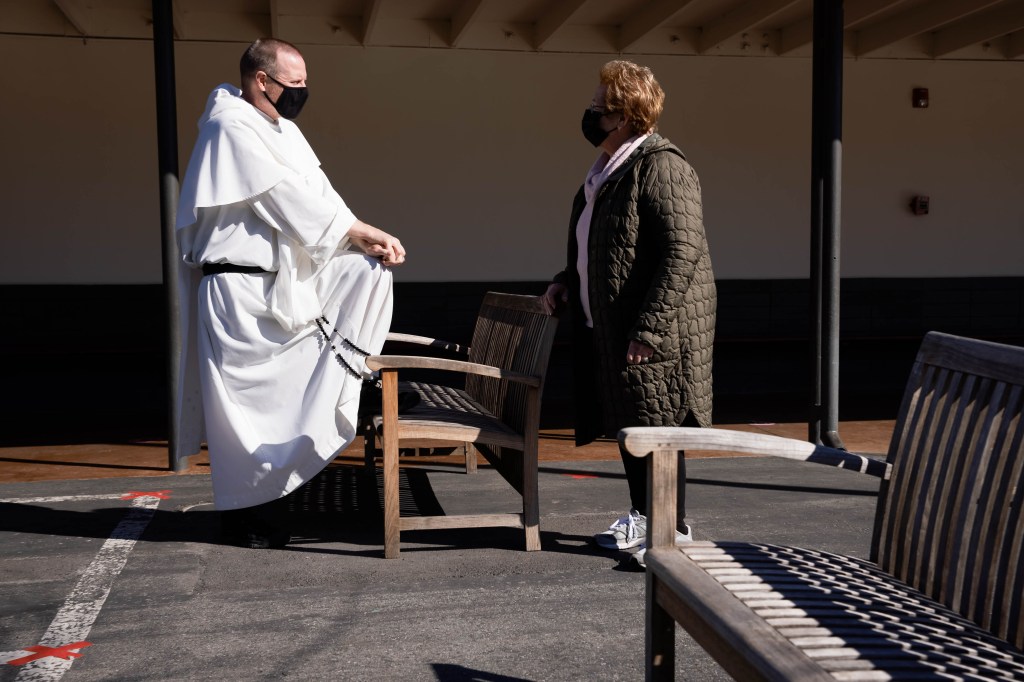 A high court decision to lift a California ban on indoor church gatherings did not lead to a groundswell of openings Sunday, as many places of worship continued to hold their services outside or online, following state and local restrictions that have been in place for months amid the COVID-19 pandemic.

While some parishioners and church leaders said they welcomed the ruling from the U.S. Supreme Court, they were not ready to change the routine of the past year.

“It’s 70 degrees and I’ve got this beautiful grass, so why mess with something that is working?” said Father Jerome Cudden, pointing out the natural setting outside St. Raymond Catholic Church in Menlo Park. “I’m not going to go inside just to go inside. Worship and safety can come together.”

St. Raymond’s has been holding weekly services on the parish school’s lawn since the orders came down forbidding indoor worship.

San Mateo County Supervisor David Canepa said Sunday morning that he planned to watch a Catholic mass online, as he and his family have done for most of the past year.

“Everyone has a right to pray, but the Supreme Court’s ruling is premature and is not based in public health,” he said. “We think the safest place to celebrate mass is in our living room.”

St. Thomas Aquinas and First United Methodist Church in Palo Alto were shuttered Sunday morning. So were Rise City Church and Church of God in Christ in Redwood City as well as others on the Peninsula.

In a 6-3 decision, the Supreme Court justices ruled late Friday that Gov. Gavin Newsom’s strict orders appeared to violate the Constitution’s First Amendment protections of the free exercise of religion. The ruling set aside a decision by the U.S. 9th Circuit Court of Appeals in San Francisco.

The case involved lawsuits filed by the South Bay United Pentecostal Church in Chula Vista and the Harvest Rock Church in Pasadena. South Bay United had repeatedly challenged state restrictions on indoor worship as well as singing and chanting.

The Supreme Court ruled that California officials can limit indoor services to 25% of a building’s capacity but cannot treat churches differently than businesses. However, the justices also said the state can continue to restrict singing and chanting.

“Since the arrival of COVID–19, California has openly imposed more stringent regulations on religious institutions than on many businesses.” wrote Justice Neil M. Gorsuch in one of three concurring opinions. “California worries that worship brings people together for too much time. Yet, California does not limit its citizens to running in and out of other establishments; no one is barred from lingering in shopping malls, salons, or bus terminals.”

The decision came eight months after the court voted 5-4 to reject an earlier challenge to California’s restrictions on church services.

Ilena Bortolin-Sternberg of Morgan Hill said she did not try to find an open Catholic church on Sunday despite being a regular worshiper, figuring another major Sunday attraction might make open churches hard to find: “Today is the Super Bowl.”

Bortolin-Sternberg said she and her husband Ken Sternberg plan to attend services next weekend at St. Patrick’s Catholic Church in Grass Valley, where their niece lives.

Like some of the justices in the majority opinion, Bortolin-Sternberg questioned the rationale of allowing shoppers in big-box stores but not worshipers in churches.

“It’s better than nothing,” she said of the ruling, but “it is a bunch of (nonsense) that we can’t go to mass.”

Cudden, of St. Raymond’s, he did a quick poll on Saturday night: Only three out of 99 worshipers wanted to hold inside services the next day. On Sunday morning, only one out of 50 people he asked wanted to go into the church on Santa Cruz Avenue.

“Mass is mass wherever it is,” said worshiper Jeanne Quinlan of Menlo Park. “Mass in a garden is just as good.”

Canepa, the San Mateo supervisor from Daly City, said he understands the emotional strain of not having open churches, particularly during a time of crisis. But he said he is worried that allowing people inside to worship could result in a bad outcome with the transmission of coronavirus.

“We will know pretty quickly if we go back to the purple and if we go back to stay at home” orders, Canepa said. “If that does happen there will be a pretty strong correlation to churches opening.”

“The court ruling is great but I want to follow the local orders,” he said Sunday. “We want to protect people and be safe.”

Nadeem said the mosques in Santa Clara have offered Islamic prayer five times daily in their parking lots. They performed their rituals outside even during the recent storms, he said.

The Friday prayer, known as “jumah,” drew some 4,000 worshipers on one occasion, Nadeem said. Now the mosque gets around 500 people for the outdoor prayer.

“I wonder when we can go back to that,” Nadeem said of a big indoor crowd. “It sounds like a dream to me.”