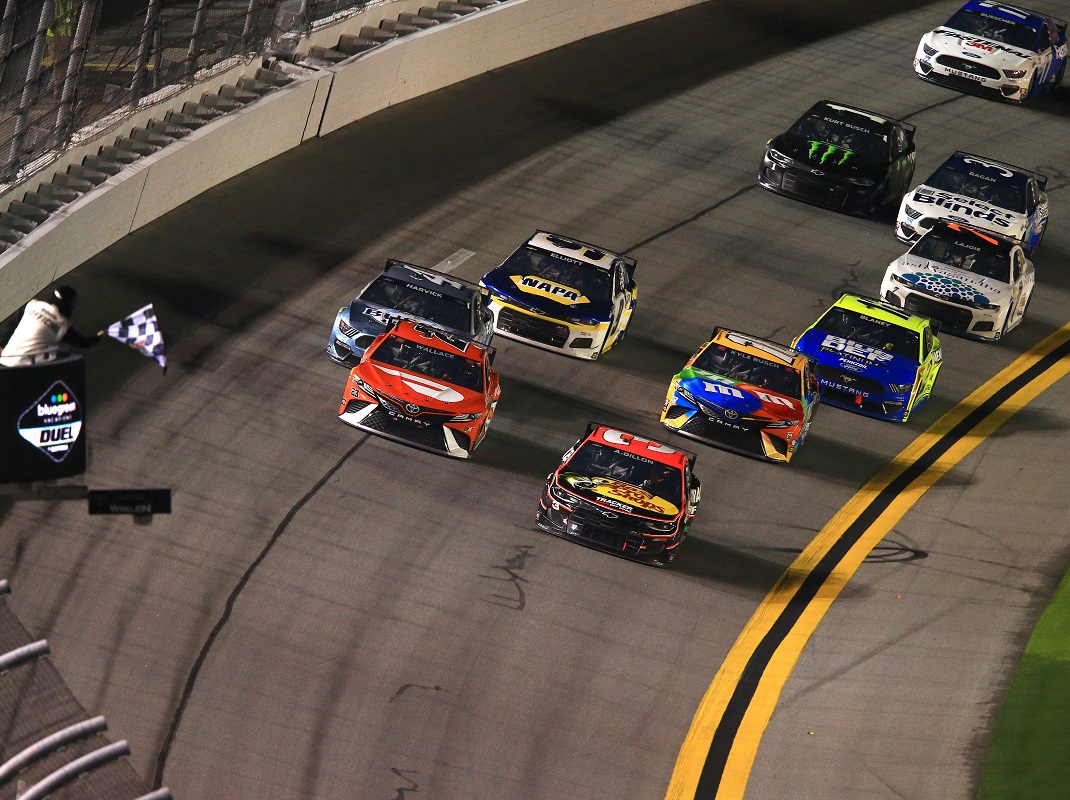 DAYTONA BEACH, Fla. – With a winning move reminiscent of the driver who made Richard Childress Racing’s No. 3 Chevrolet famous, Austin Dillon drove to victory in the second Bluegreen Vacations Duel at Daytona Int’l Speedway.

It marked the first Duel win for Richard Childress Racing since the late Dale Earnhardt’s last of 12 Duel triumphs in 1999, as well as the first Duel victory for Dillon in his NASCAR Cup Series career.

The 150-mile qualifying race for the 63rd Daytona 500, which ended early Friday morning after a two-hour rain delay following the first Duel, was action-packed from start to finish.

It featured two multi-car crashes, an overtime restart and a last-lap pass that left the fans who waited out the weather breathless following the checkered flag.

When the green flag waved on the two-lap sprint to the finish, it was a trio of Toyota Camrys – driven by Martin Truex Jr., Bubba Wallace and Kyle Busch – hooked up in the draft in an effort to get away from the pack behind them.

Their plan worked for more than a lap, as Truex led at the white flag while defending the bottom lane.

However, coming down the backstretch, everything fell apart as Truex moved up to avoid the slower car of Derrike Cope, who was limping along on the apron at a very slow pace.

Wallace went underneath Truex, while Dillon surged on the outside with a huge push from the Ford of Kevin Harvick. The pair split Truex’s No. 19 and sent the 2017 NASCAR Cup Series champion back through the field in an instant with no drafting help in the middle lane.

That left Wallace on the bottom with a gap back to Kyle Busch, while Dillon still had the push from Harvick exiting turn four.

Dillon’s momentum brought him up to Wallace’s bumper as Wallace moved up to block, and then the third-generation driver sliced down to the bottom to beat Wallace back to the finish line.

The margin of victory for Dillon was .057 seconds over Wallace, who crossed the line second.

“I was talking to my spotter before the restart, and I knew we had (Harvick) behind us and he’d been pushing well all night … but Harvick had (Ryan Blaney) behind him and I knew the manufacturer thing would be tough,” Dillon said. “I made a decent block on the backstretch and then (got) a heck of a push (from Harvick) through (turns) three and four.

“I knew Bubba was going to try to block it, but I just whipped the wheel and it worked out well.”

A runner-up finish for Wallace and 23XI Racing, the new Cup Series team co-owned by NBA legend Michael Jordan and three-time Daytona 500 winner Denny Hamlin – was a solid result on paper, but Wallace was hard on himself for getting to the lead but failing to reach the checkered flag first.

“(I made) a lot of mistakes. It’s a good debut, but (there’s) nothing to be really happy about for myself,” lamented Wallace. “It’s okay for drivers to be hard on themselves. That’s how we motivate ourselves to go out and do better. Hats off to my guys – the 23XI team – for building me a great DoorDash Toyota Camry. I tried to do all I could to help (Martin) Truex there, get Toyota a win. I appreciate Kyle (Busch) for cutting me a lot of breaks.

“I know I’ve got a lot to learn here, but all in all, it was a good night. I just have some learning to do.”

Ragan’s eighth-place finish locked him into the Daytona 500 on merit as the highest finishing driver without a NASCAR charter, allowing Kaz Grala to fall back on his qualifying speed to make the 63rd edition of The Great American Race.

Grala saw his hopes nearly dashed during the five-car crash entering turn one that set up the overtime finish, when fellow open driver Garrett Smithley made contact with Brad Keselowski that sent Keselowski’s Ford spinning in the middle of the pack.

The incident swept up Grala and damaged his No. 16 Kaulig Racing Chevrolet, leaving Grala with little speed to maintain the draft and forcing him to hope Ragan could help him secure a place in the field.

Ragan did just that, which meant that Smithley and Noah Gragson were the two drivers in the second Duel who failed to qualify for Sunday’s Daytona 500.

Gragson held the transfer spot for much of the second Duel, but his No. 62 Beard Motorsports Chevrolet sustained terminal damage in the same crash that Smithley, Keselowski and Grala were involved in.

Also collected in that incident was William Byron, the outside polesitter for the Daytona 500, whose No. 24 Hendrick Motorsports Chevrolet was crashed beyond repair after hitting the outside wall in turn one.

Byron confirmed after being released from the infield care center that he’ll go to a backup car for the rest of the weekend, which will force him to drop to the rear of the field on Sunday afternoon.

Of note, the second Duel marked the first ever Daytona 500 qualifying race to stretch over two days, going green shortly after 11 p.m. ET Thursday night and taking nearly a full hour to complete.

To view complete race results, advance to the next page.

Hubbard was effectively guaranteed a spot in the women's super heavyweight category, the report from the Olympics-focused trade publication said, after the International...
Read more
Load more