Analysis: This year’s Oscars already have made history 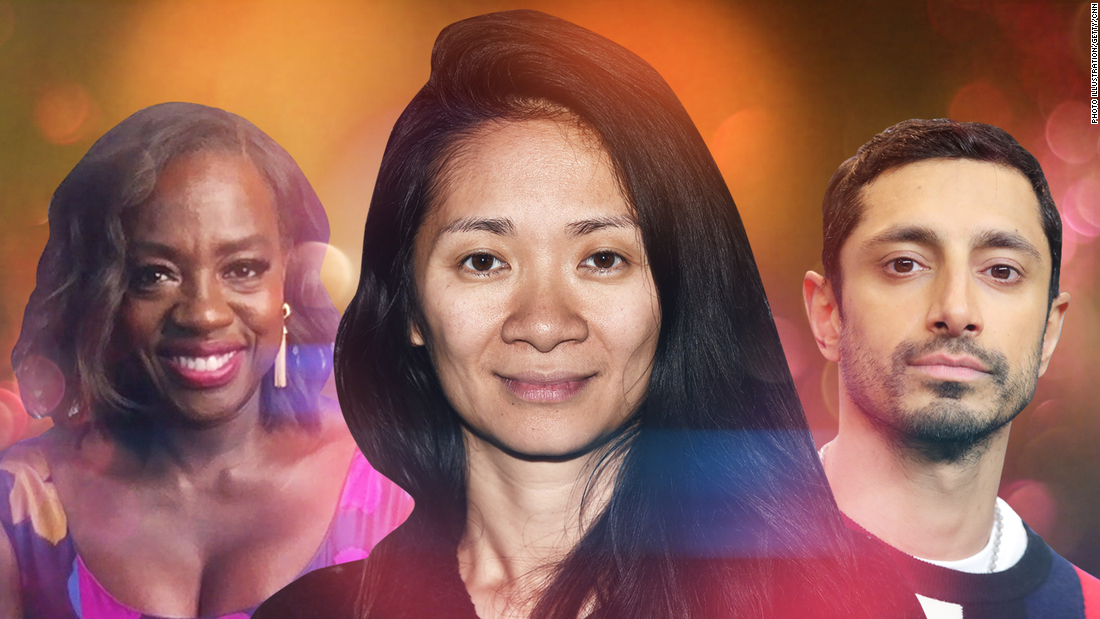 The show is this Sunday — but keep reading to find out why you should get out the popcorn and start celebrating now.

Women in directing: There have been many a year when not a single woman has been nominated for best director.

This year, there are two.

Chloé Zhao, who won a Golden Globe for best directing in March, is up for “Nomadland” (which is also nominated for best picture).
And Emerald Fennell is a contender for her film “Promising Young Woman.”
Seventy women received a total 76 nominations, according to the Academy, a record for a given year.

“Judas and the Black Messiah,” directed by Shaka King, is a best picture nominee and centers around the true story of Black Panther leader Fred Hampton (played by Daniel Kaluuya) and William O’Neal (played by LaKeith Stanfield), the man who infiltrated the political organization at the behest of the US government.
Both Kaluuya and Stanfield are nominated for best supporting actor, along with another Black man, Leslie Odom Jr., for his role in “One Night in Miami.”

Asian representation: Not only is Zhao the first Asian woman and woman of color to be nominated as a director, but there are others who also are notching firsts.

Steven Yeun, a South Korean-born American actor, is the first man of Asian descent to secure a best actor nom for his work in “Minari” — which, in a welcome trend, is also up for best picture.

Queen Viola: With her nomination in the best actress category for her performance in “Ma Rainey’s Black Bottom,” Viola Davis became the most Oscar-nominated Black actress ever, with four career nods.
A moment for Muslim actors: Riz Ahmed is the first Muslim actor to be nominated as best actor for his turn in “Sound of Metal.”
Mahershala Ali was the first Muslim actor to win in the supporting actor category for “Moonlight” in 2017 and “Green Book” in 2019.
Sir Anthony Hopkins: At 83, he is the oldest best actor nominee ever, a title Richard Farnsworth previously had held when he was nominated at the age of 79 for “The Straight Story” more than 20 years ago.

In the lead-up to Sunday’s Oscars ceremony, why limit yourself? This week, I’m going to cheat a bit and encourage you to watch as many of the films nominated for best picture as you can to prep for the big day. Kick off the viewing with my personal faves.

All of these films touch on something at the forefront of our country at the moment: the economy, race relations and the immigrant experience.

Frances McDormand is exceptional is every role she tackles, and this film is no exception.

As a widow who travels the country looking for gig work, she finds a community unlike any other — not “homeless” but “houseless.” The film brings new meaning to the concept of home being where the heart is.

‘Judas and the Black Messiah’

Fred Hampton was only 21 years old when he was gunned down by authorities in his Chicago apartment in 1969.

Daniel Kaluuya embodies Hampton’s spirit as a Black Panther leader who is working for racial justice and economic parity in his community. LaKeith Stanfield is equally skilled as the man hired by the FBI to betray Hampton, even as the informant comes to admire the ill-fated political activist.

A Korean family moves to rural Arkansas to pursue the American dream in this heartwarming movie.

It’s a struggle, but along the way, lessons of family, tradition and community are learned.

These works are some of the best of the year.

Here’s where you can stream all of the best picture nominees.

Two things to listen to:

Let’s throw it back on a Thursday.

A group that got its start in the ’80s, Dinosaur Jr., releases its 12th studio album, “Sweep It Into Space,” out Friday.

“These guys make loud, warm and tuneful rock about trying to get by when the outside world — or your interior voice — is telling you to stop,” Wall Street Journal music critic Mark Richardson wrote in his review. “If there’s a complaint to be made, it’s that Dinosaur Jr. albums tend to sound the same. But there’s something to be said for executing perfectly within established parameters.”

The trio Sir Sly is dropping a new album titled “The Rise & Fall of Loverboy.”

The band’s latest album is about “falling in love with someone new, and the magic that brought into my world,” frontman Landon Jacobs told Mxdwn.com.

“It’s also about slowly eating away at that magic through drinking and self-medicating, and my journey into early sobriety and reckoning with my past,” he said.

“The Rise & Fall Of Loverboy” comes out Friday.

One thing to talk about:

Demi Lovato felt triggered — and some people thought it wasn’t a good look.

The singer/actress posted on her official Instagram complaining about a frozen yogurt shop that had a selection of sugar-free and “other diet foods” on display.

Lovato, who is in recovery for an eating disorder, sparked criticism from some who felt she used her massive platform to shame a small business.

The star argued that the LA shop had a problem with messaging and should reframe its approach for customers like her and others who struggle with body image.

Instead, she discovered the internet isn’t too sympathetic when it comes to emotional triggers.

Something to sip on

This week marked the fifth anniversary of the death of Prince.
The music icon was a personal favorite of mine, and I continue to miss him. While many artists leave their music behind as part of their legacy — a new album is being released in July — knowing that I’ll never get to see him perform in concert again saddens me.
I’ve spent the last few days watching YouTube videos of his concerts and streaming his music. There will never be another Prince.

And if anyone ever tries to make a hologram of the Purple One, they will have to deal with me. You have been warned.