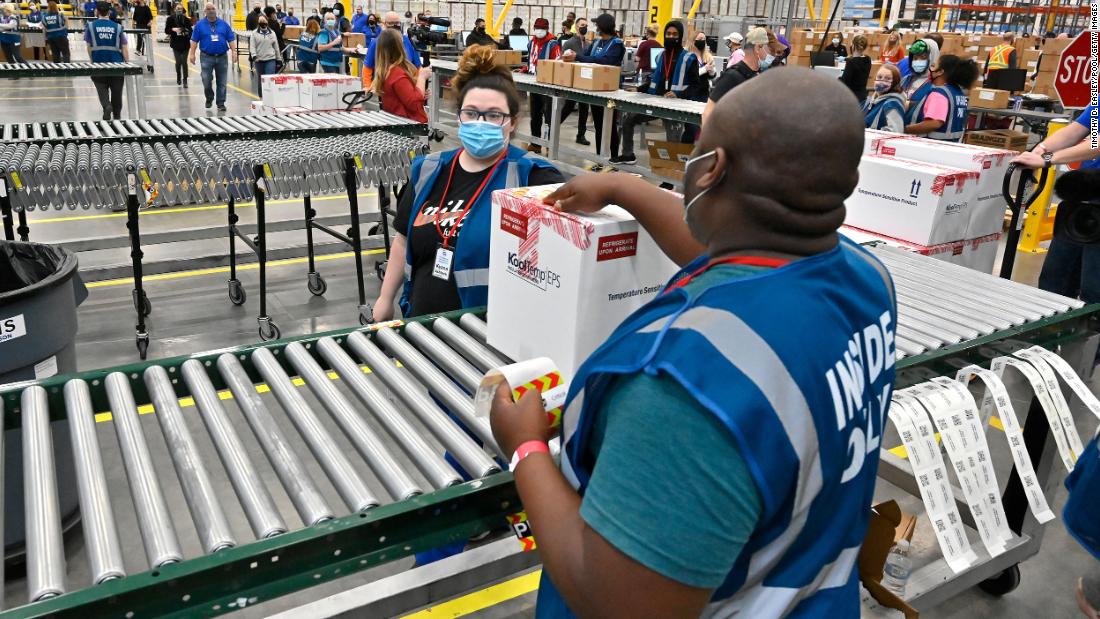 What did Duggan say? At a news conference Thursday, he said: “So, Johnson & Johnson is a very good vaccine. Moderna and Pfizer are the best. And I am going to do everything I can to make sure the residents of the City of Detroit get the best.”

What did the White House do? “As I understand it, our team has been in touch with the mayor, there has been a bit of a misunderstanding,” White House press secretary Jen Psaki said during Friday’s briefing, adding that she thought “he was going to go out and speak publicly.”

What’s the story with the Johnson & Johnson vaccine? The third shot received emergency use authorization from the FDA a week ago and has gotten a push from the White House, which engineered a rare agreement with the drugmaker Merck to ramp up production at a time when the country is racing to achieve herd immunity and reopen.

What’s the problem? There is a perception, based on trial results, that the Johnson & Johnson vaccine is less effective than the inoculations from Pfizer and Moderna. (More on that in a moment.) Add that to the US Conference of Catholic Bishops guidance that Catholics should choose a different vaccine when possible. As CNN reported, the bishops have “‘moral concerns’ over the shot due to its use of lab-grown cells that descend from cells taken in the 1980s from the tissue of aborted fetuses.”

Given the choice, people want one dose. At a FEMA vaccination site CNN visited in Miami, people were given the option of which vaccine to get. Many chose the Johnson & Johnson because it requires only a single dose.

Related: See how vaccinated Floridians made their choice between Johnson and Johnson and Pfizer

What are the facts? Here’s CNN’s full fact check of Duggan’s comments.

And here’s some guidance from the CNN Health’s John Bonifield:

Is the J&J vaccine effective? In trials the J&J vaccine proved just as effective as the other two in preventing hospitalizations and deaths from Covid-19. In a clinical trial, the J&J single-dose vaccine showed about 66% efficacy globally against moderate to severe/critical Covid-19; in the United States, it showed 72% efficacy. Against severe forms of the disease, efficacy is even higher, offering nearly 86% protection. In the trial, there were no Covid-19 deaths among people who received the vaccine.

Is that less effective than other vaccines? Without a clinical trial, it’s impossible to compare J&J efficacy rates directly to those for the previously authorized two-dose vaccines by Pfizer and Moderna. The vaccines were tested at different times, when different strains were more prevalent than others, depending on the location. J&J was tested in South Africa, where the dominant strain was the B.1.351 variant, which is believed to be more contagious and which may weaken the immune response to vaccination. Had Pfizer and Moderna been tested at the same time as J&J, the variants might have impacted their efficacies.

The J&J vaccine doesn’t require extreme cold temperatures for storage, which may make it easier to administer in some places.

The J&J vaccine is also being trialed as a two-dose vaccine. Those results are not yet available.

We all need to be extremely focused on efforts by Republicans in state legislatures to make it more difficult for people to vote.

In Georgia, for instance, the GOP-controlled legislature is working on a law to limit weekend voting. The would cut down on voter turnout, especially since in-person Election Day voting in Georgia cities is notorious for extremely long lines.

More specifically, fewer weekend voting days would seriously cut down on the number of Black voters.

In addition, the Georgia law would “restrict absentee voting, end automatic voter registration and limit access to drop boxes that voters use to return their absentee ballots.”

Why is Sunday voting important? “Most working families are working two or three jobs, and don’t have the capacity to be able to vote, like a normal person working a normal job where the hours of that job kind of coincide with their ability to go into a voting precinct and actually cast the ballot,” Atlanta City Councilman Antonio Brown said.

And across Georgia, Black churchgoers have a tradition of heading to the polls together after Sunday services — driving to the polls or riding in church vans to cast their ballots during the early voting period.

CNN’s Kelly Mena covers local and state issues, and she did a special edition of the Political Briefing podcast Friday focused on the Georgia law and scores of others across the country.

She also focused on Arizona, where one bill would have given the state’s GOP-controlled legislature the ability to select presidential electors if it questioned the election outcome. Listen here.

This is Joe Manchin’s Senate. Get used to it

Now we’re cooking. The US added 379,000 jobs in February, signaling the recovery is finally gaining steam.
Reports like this one could call into question the need for a stimulus plan as big as the one Democrats are considering in the Senate. Or not. The nation is still down 10 million jobs over the past year of Covid.
Paring down the stimulus was a major theme of the week after Senate Democrats, in particular Sen. Joe Manchin, struck a deal with the White House to shrink from $400 to $300 per week an extension of unemployment benefits. And Manchin held up progress on the bill all Friday afternoon over the question of whether the benefits should go through September, as House Democrats put in their bill, or July, as Manchin preferred. (A deal was finally struck on benefits into September.) Get the latest updates here.
Democrats! They’re not all liberal. Here’s how the Washington Post wrote it, which I think is apt.

With the Senate equally divided, the party’s moderates sought to portray themselves in the midst of the stimulus debate as a fiscally restrained counterpoint to liberals — even as they stood with Biden on the need for new emergency aid. But their tactics still threatened to open new political rifts in the party and leave perhaps millions of Americans from obtaining checks and other support they might have otherwise received.

Reminder. Manchin and other moderates like Arizona Sen. Kyrsten Sinema are the only reason Democrats have a majority. And without any Republican support for Democratic proposals, he’s a key vote on everything. So he can basically get whatever he wants.