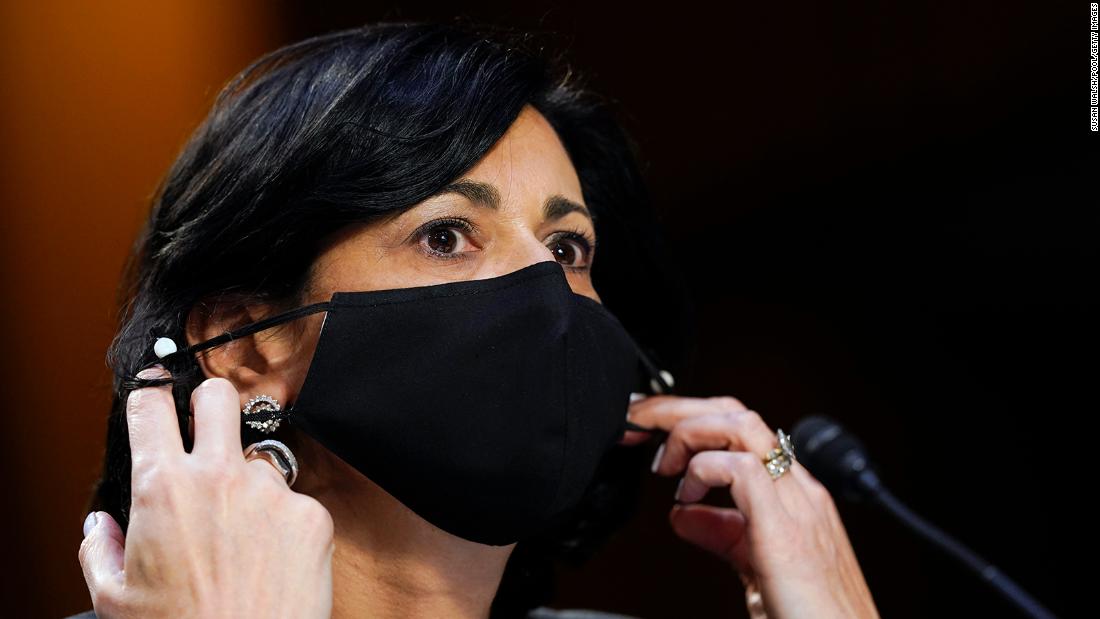 “The continued relaxation of prevention measures while cases are still high and while concerning variants are spreading rapidly throughout the United States is a serious threat to the progress we have made as a nation,” Centers for Disease Control and Prevention Director Dr. Rochelle Walensky said Monday.

“It’s really very much a race,” Dr. Peter Hotez, dean of the National School of Tropical Medicine at Baylor College of Medicine, told CNN. “If we can continue to accelerate the number of people vaccinated in this country… I think we’ll be in a much better position. But you have unfortunately a lot of governors releasing restrictions, people are traveling… and this B.1.1.7 variant.”

“It could go either way,” he added, on whether the country could soon be facing another surge.

Since the start of the month, at least a dozen state leaders have eased Covid-19 restrictions. And a day after both experts’ remarks, two more governors announced plans to relax some measures.

Indiana Gov. Eric Holcomb announced Tuesday that starting April 6, the state’s face-covering mandate will become a state mask advisory. Masks will remain mandatory in state buildings and facilities as well as at Covid-19 testing and vaccination sites, the governor said.

Also starting April 6, decisions about venue capacity will be in the hands of local officials, Holcomb said, and customers in restaurants, bars and nightclubs will no longer be required to be seated. Six feet of spacing between tables is still recommended, he added.

In Virginia, Gov. Ralph Northam announced that starting April 1, both indoor and outdoor gathering limits will increase and certain sports and entertainment venues will be able to operate with additional capacity.

“While some capacity limits will be increased, we must all remember to stay vigilant and work together to protect ourselves, our loved ones, and our communities,” he said in a statement.

Many state leaders — including those who have opted to relax restrictions — have in recent weeks expressed optimism about inching closer to the end of the pandemic, citing lowered Covid-19 numbers in comparison to the winter surge and increasing vaccinations.

So far, more than 83.9 million Americans have received at least one dose of a Covid-19 vaccine, according to data from the CDC. More than 45.5 million are fully vaccinated, according to the data. That’s roughly 13.7% of the US population.

At least two states — Alaska and New Mexico — have fully vaccinated more than one in five residents, data published Tuesday by the CDC shows. In New Mexico, more than a third of the population has received at least one dose of vaccine.

Vaccine eligibility across the US

As more Americans are vaccinated, the number of people going out is also increasing, according to a poll from Axios-Ipsos published Tuesday.

Compared to a month ago, the number of people who have gone out to eat or visit friends and family are up 12 and 9 percentage points respectively, according to the poll — which was conducted March 19 to 22 and was made up of 995 Americans 18 and older.

The number of people who believe that dining out poses a large risk to health and well-being has gone down to 23% compared to 33% a month ago. Those who have visited friends or relatives — 48% — is the highest since October. Additionally, 54% have visited a non-grocery retail store — the highest number since May.

In some cases, it’s the unvaccinated who are driving the shift in behavior. For example, 52% of unvaccinated respondents say they’ve visited with friends or relatives in the last week, compared with 41% of people who have gotten the vaccine.

The good news is that safety measures aren’t being abandoned.

Meanwhile, AstraZeneca is soon expected to apply for emergency use authorization for its Covid-19 vaccine in the US. But some experts fear recent concerns over an announcement of its vaccine data could further contribute to hesitancy.

But the National Institute of Allergy and Infectious Diseases said in a statement Tuesday the independent board that reviews data from multiple vaccine candidates raised concerns about the company’s announcement.

The board “expressed concern that AstraZeneca may have included outdated information from that trial, which may have provided an incomplete view of the efficacy data,” the NIAID statement said.

Speaking on ABC’s “Good Morning America” on Tuesday, Dr. Anthony Fauci said the AstraZeneca news release may have contained misleading information about its vaccine efficacy — “an unforced error” that may create doubt about what is likely a good vaccine.

The data is “really quite good, but when they put it into the press release, it wasn’t completely accurate,” Fauci said.

One expert says she worries this may hinder confidence in the vaccines among Americans.

“I am very concerned because there is already so much misinformation and disinformation out there,” emergency physician Dr. Leana Wen told CNN on Tuesday. “With this amount of public scrutiny, I think every company really should be aiming for full transparency and accountability and we really need to understand what happened here.”

“AstraZeneca owes us an explanation,” she added.